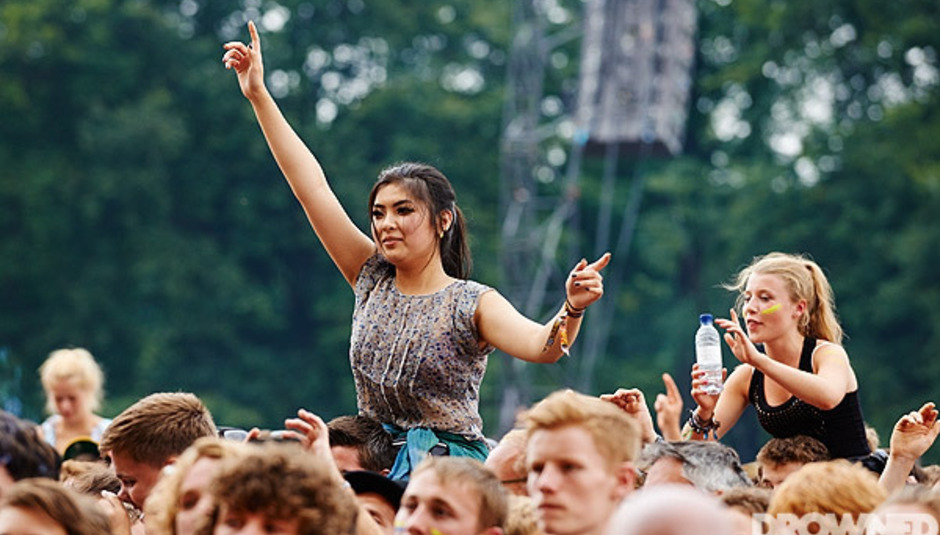 Vast quagmires gorging on beloved trainers, a tsunami’s worth of rain, and the immortal cries of “Alan!” and “Buttscratcher!” – 2013 saw Leeds Festival celebrate its fifteenth anniversary in style. While many of the weekend’s scenes were familiar to anyone who’d spent an August Bank Holiday at Bramham Park, beneath the familiar layer of sludge, something had changed.

With two new stages dedicated to dance and urban music and a hip-hop superstar headlining was the heyday of NME-indie drawing to a close, just like Kerrang-rock before it? Or, less dramatically, was this just a reflection of the new alternative scene – a festival that was branching out, abandoning the old punk-versus-disco tribal traditions and embracing artists of a high quality regardless of genre, as so many fans have already done?

Leeds’ stylistic shift was most evidenced by the Friday night Disclosure/Nine Inch Nails clash. Though many (including Reznor) had questioned the justification of Biffy Clyro leapfrogging them to headline, Nails’ industrial rock crashed out to an astonishingly small crowd. It seemed that cult status or not, most punters wanted to cram in and watch Disclosure rattle through most of Settle. With Ed "Friendly Fires" McFarlane, Aluna “-George” Francis and Sam Smith as guests, the brothers whipped the packed tent into an utter frenzy – and the success of their dynamic house was the start of a much-repeated trend.

Australians Parachute Youth delivered an excellent electro-house set early on Saturday, Charli XCX brought the house down with ‘I Love It’, and Friction’s drop-heavy DnB set delighted gurning people in all kinds of silly hats.

Come Saturday, it was the turn of the big hitters. Rather depressingly Chase and Status’s DnB-lite drew a truly colossal crowd, as did Skrillex’s spaceship show and aggressive brostep. Major Lazer pulled out all the stops (Diplo’s zorb, an audience member tied up on-stage and aggressively twerked over by scantily clad Lazer ladies) to successfully create a dancehall rave within a “rock” festival – though Jillionaire’s shout outs to all the Jamaicans, all Dominicans, then rather desperately, to all the West Indians in the house fell tellingly flat. Diplo’s ‘Smells Like Teen Spirit’ remix may have caused chaos down the front, but you had to wonder what the veterans of ’92 would have made of it all.

Facing a crowd that each year sports exponentially more snapbacks and a mainstream comeback not seen since the early noughties boom, it’s not surprising that this year’s Reading and Leeds had the best hip-hop line up in ages. One of the biggest breakout stars of 2013, Chance the Rapper’s short set to a small but dedicated crowd was the crowning glory of Leeds’ hip-hop experience. Chance looked slightly taken aback by his reception, but increasingly delighted by the rapturous reception. Radiating charisma, he raced through Acid Rap hits, bringing call and response support on ‘Juice’ and building up a crowd that finished eating out of his hand. A nod to fellow Chicagoan Kanye with ‘All Falls Down’ and too quickly it was over; the crowd left in no doubt that Chance will soon be a household name.

Angel Haze stuck to rocknroll clichés, turning up late and encouraging a closing stage invasion – but sneaking in a funky Missy Elliott cover and finishing with a thundering ‘New York’. More flamboyant visually, Azealia Banks still played it slightly safe – sticking to her singles rather than airing Broke With Expensive Taste - though ‘212’ proved an earworm, echoing around the campsites for the rest of the weekend. On the 1Xtra stage, Austrian Left Boy performed the weekend’s most complexly choreographed set, but booing of his version of ‘Call Me Maybe’ proved that a certain level of anti-mainstream sentiment lingers at Leeds.

Ferocious, shuddering sub-bass heralded the start of Earlwolf’s set, something of a homecoming after Odd Future’s manic reception in 2012. With tracks from Doris and Wolf, Earl and Tyler stayed away from the singles, leaving a persevering crowd a little disappointed, though the puerile crowd interaction was well-received. Cutting their afternoon set 45 a few minutes short, as a joke, but at the crowd’s expense – Tyler in particular playing on their discomfort, yelling “Give it up for black people!”. Later, opening to broad-accented chants of “ayy-sap”, A$AP Rocky’s set was an altogether easier affair, propelled to instant madness by a breakneck ‘Long Live A$AP’. Given extra bulk onstage thanks to support from the A$AP crew, Rocky evidently enjoyed himself, flashing golden grills as he grinned throughout and enthusing as the crowd sparked up en masse for ‘Purple Swag’, screaming every word back to him.

All of which left us with a 40-year-old white guy closing out the festival. Eminem last headlined in 2001, but aside from the sheer quantity of hits and variety of his back catalogue, there were no sign of fatigue; he remained as razor-sharp and energetic as he was over a decade ago. With material from his first (and best) three albums interspersed by more recent singles (‘Airplanes’, ‘Love The Way You Lie’), it was a set that constantly astonished, with a mesmerised crowd mimicking every rhyme –continually surprised as hit followed colossal hit; the man has simply too many to hold in mind. The best-selling artist of the 2000s had come out to play. Unintroduced and initially unnoticed by many, Dido’s appearance for ‘Stan’ seemed to make Eminem more comfortable than many recorded parts – but nothing could distract from the man of the hour. It came to a euphoric close – asking “Can I take you back to back to a time when I used to get fucked up?”, he brought out ‘My Name Is’, ‘The Real Slim Shady’ and ‘Without Me’ – before ending on ‘Lose Yourself’. From laugh-out-loud to tear-jerker to vitriolic aggression, via tunes and rhymes that are seared into the consciousness of a generation – for the umpteenth time, he’s back.

So, Leeds was certainly sold on Marshall Mathers’ hip-hop. But will the trend continue beyond 2013? Of course, Reading and Leeds have always had a strong mainstream element with a big proportion of the crowds going more to get wrecked celebrating their GCSE and A-Level results than out of any affinity to a specific scene. There’s no real evidence that this year’s swing in style and sound will have any more staying power than when everyone was into nu-rave and Klaxons headlined – but that the line-up was so dominated by two entirely non-rock genres surely says something. Biffy Clyro, System of a Down, Green Day - the big rock bands put on great shows, to great reception.

In a weird crossover, almost everyone who was into the dance and hip-hop acts went to see skate punk bands – with no discernible link beyond an affinity for snapback hats? FIDLAR, Skaters and Wavves all pulled in devoted crowds with fierce circle pits demonstrating the old popularity of energetic fury hasn’t disappeared with the riots. But with dubstep, house, and hip-hop creeping up the bill, one wonders if Reading and Leeds aren’t leaning towards becoming “young” festivals, offering a range of music and an anarchic intensity, rather than the cream of the rock acts. There’s still that preference for ferocity, regardless of genre.

A festival in an enchanted forest. In...