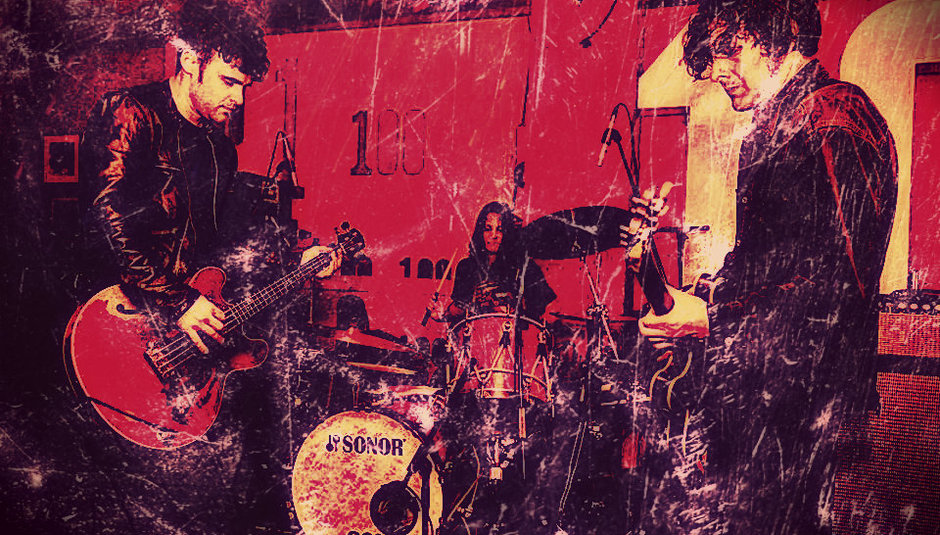 A few weeks ago, we ran a competition, offering you the chance to ask BRMC anything. The best questioner won a pair of tickets to see the the band play an intimate show for Converse at London's legendary 100 Club (see footage from the show at the end of this piece) ...can you guess which question won our competition?

Q. Ted Joyce via Twitter: How many leather jackets do you own collectively as a band?!

A. Robert: I usually wear them until they turn to shreds, i don't have very many left. Each one kind of has it's day and then it disintegrates over time. They kind of become like blanky's, you hold onto them until someone comes along and tears them out of your hands.

Q. David Zomeno via Facebook: The 100 club is a piece of music history that was saved from closing down a couple of years ago. Do you feel attached to any place so you would give anything to save it?

A. Robert: Some rooms just have a spirit to them. Slims and The Purple Onion in San Francisco are like that to me, there are actually a lot of rooms that are worth throwing yourself on the tracks for. Just about every major city has that one place ya know, that one shitty little dump that is always gonna be worth loving, hating, and fighting for, whether people do or not is another question.

Q. Jon Ford: You can take one man out on a bar crawl before settling in for the night with a bottle of whiskey; Keef, Iggy or Kurt?

A. Robert: No question, Iggy.

Q. James Freemantle via Twitter: What's the one thing you bring on tour from home?

A. Robert: My black boots. I can live without my jacket and my wallet and all the rest, but it honestly strangly effects the way you play guitar if you don't have the right boots on. One of the strangest mystery of rock'n'roll there is.

Q. Andy Roper via Facebook: How is the writing process different with Leah in the band? How do you feel she has changed your sound (if at all)?

A. Robert: Leah has a lot of heart, and she listens to the music closely and dearly. There is no big dark secret to it all, it's just about listening. And that's the one thing that you can't teach someone how to do. All of us just try to stand out of the way of the song really, and the more we listen the more we learn from it, and how to give something back to it.

Q. Linda Leng via Facebook: If you ever have the chance to have another member in the band, who could she/he would be?

A. Robert: A juggler.

Q. Kyle Leitch: You write a lot about redemption...is there any?

A.Robert: Who knows, but can't hurt to look.

Q. Spencer Kelly via Facebook: You have performed Bob Dylan's 'Visions of Johanna' live. Who's favourite is it, and why?

A. Robert: We all love Dylan. That particular cover came about when we were touring in Australia though, i got really sick and lost my voice for 5 days, i couldn't speak to anyone, had to write everything down on little pieces of paper and after a while people stopped talking to me. I got so bored that i kept myself entertained by just repeating all the verses of 'Visions Of Johanna' in my head over and over, after that i just started playing it live to get it out of there.

Q. Rob Simpson via Twitter: Which components would you say make up the heartiest of all breakfasts?

A. Robert: I always miss breakfast. i'm kind of an insomniac and so i usually just try and make it up in time for lunch if i'm lucky.

"I'm always searching for something w...