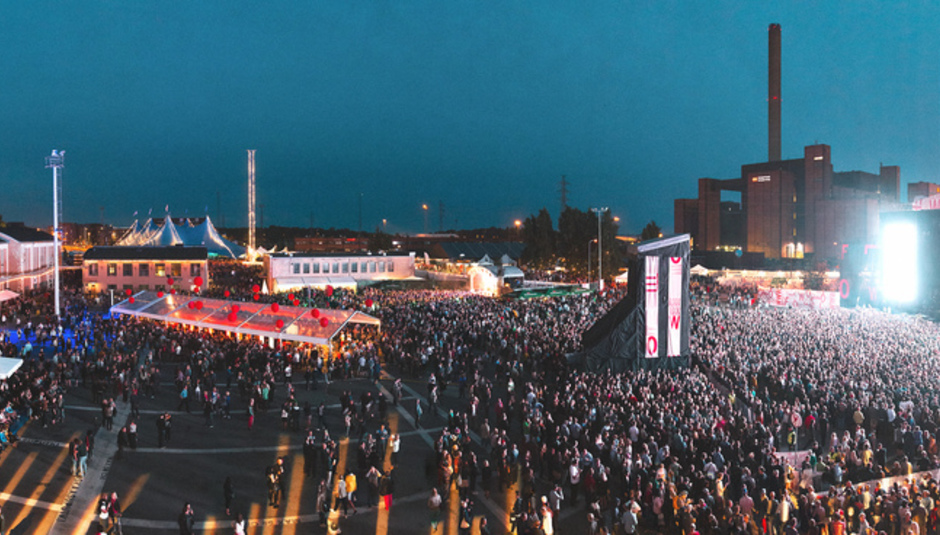 Sunday at a British music festival; it’s always the same.

If you get up early enough, you’ll be able to catch the sight of industrial dumpster trucks gobbling up empty Tuborg cups and ‘gourmet’ burger trays around the main arena. By midday, enough dust will have been kicked up into the air so that your nostrils become clogged with black crud. Assuming you shake off that monstrous hangover, you should be able hold out and watch the weekend’s final headliner. Whether or not you manage to hear them over high winds and ceaseless crowd chatter is a completely different matter.

Sunday at Flow Festival 2013; DiS has just polished off a hearty serving of chicken mussaman curry and is basking in the splendour of Ricky-Tick Big Band & Julkinen Sana. They’re a Finnish outfit, so we haven’t got the foggiest what they’re on about, but the magnificence of a brass section that’s fronted by three singers-cum-rappers is not to be denied.

Sated in appetite and slightly in awe of the sea of toddlers bopping merrily along on their parent’s shoulders, we remember the time we once got cracked in the head by a stray army boot while waiting for The Kooks to come on stage at Reading 2006. Set in the shadow of the former Suvilahti power plant, Helsinki, Flow Festival is a concrete jungle that demands to be explored. A breathtaking level of detail has been expended to ensure every nook and cranny offers some facet to intrigue or surprise.

Whether it’s the Balloon 360° Stage, where the splendid Woods perform a sun-kissed set of louch indie-rock in the round, or the street art mural dedicated to Irmela Mensah-Schramm, who’s spent her life campaigning against racism and homophobia, there’s a buzz of creativity that hums through the place.

Heartwarmingly, the Finnish acts who perform at the festival seem genuinely invested in its existence. Timo Kaukolampi from electronic rockers K-X-P can be found whipping up raw choco shakes at a vegan food stand, while Jaakko Eino Kalevi gets his groove on at midnight to the lustrous vibes of Mount Kimbie. Jaakko himself is a real highlight, channelling the spirit of Ariel Pink into a form that’s eminently more danceable. His next release is set to come out on Domino and he’s a tram driver by day; as you’d expect, the guy’s a total dude.

Although homegrown acts dominate Flow’s daytime schedule, it’s hard to define a clear music scene. Eclecticism is the order of the three day festival, so both hip-hop trios and avant-garde singer-songwriters are welcome. That said, the gloriously glitching Lau Nau proved infinitely preferable to the shouty Loost Koos who never stood a chance of overcoming the language barrier.

Stranger still is Huoratron, a DJ whose name literally translates as ‘whore-machine’. He bathes his crowd of thousands in a relentless throb of strobe lighting and industrial synth making Skrillex seem like a Chas & Dave tribute act in comparison. Supplementing this demented noise is plenty of imported talent from elsewhere. Most of these acts are doing a lucrative lap of honour around Oya Festival (Norway) and Way Out West (Sweden) over the same week, meaning their line-ups are markedly similar. Kraftwerk in particular look like they’re in Nordic territory for the paycheck only.

Just as 3D effects couldn’t distract from Avatar’s lightweight plot, the sight of a giant spaceship crashing towards the audience does little to raise the pulse of a dispiritingly polite show. Purists will have enjoyed note-perfect renditions of ‘Autobahn’ and ‘Computer World’, but Ralf Hütter has been pedaling the ‘four blokes stood behind podiums’ shtick for an eternity now. As the band’s last remaining original member, he should have the decency to call it quits or have a proper stab at re-energising their live show.

In complete contrast, Nick Cave and the Bad Seeds writhe across their headline slot with unquestionable purpose. Cave leads his wicked collective from the front row baptising each adoring fan crotch-first with sordid tales of sex and violence. The relish he takes in pronouncing lines like “I'll crawl over fifty good pussies just to get one fat boy's asshole" is outrageous given Murder Ballads was released well over a decade ago. To be fair, we’d be justifiably chuffed with ourselves if we’d strung that sentence together.

Its precision, wit and sheer decadence are qualities even Kendrick Lamar can aspire to, despite being the most imperious MC in modern day hip-hop. That his dense tales of Compton-born strife have bought him a ticket to North-Eastern Europe is a minor miracle in itself. Perhaps understandably, his stage show isn’t yet on par with his wordplay.

Whereas Cave can hold a crowd’s attention by striking a pose, the ‘Backstreet Freestyle’ star fills every pause with pleas for more noise and declarations like, “You're all individuals, now put your hands up.” Also, the amount of bass blasting from the PA during ‘m.A.A.d. City’ is enough to almost rattle our nose out of joint. It’s certainly drowns out Kendrick's more delicate inflections. Since no camping is involved in Flow, the Kamppi ‘Chapel of Silence’ or Suomenlinna sea fortress are both viable alternatives if you want to avoid this sort of sonic assault. Helsinki’s city centre is a 20 minute bus ride from the festival site meaning you can catch as much respite and tranquility as you like before heading in for My Bloody Valentine or Godspeed You! Black Emperor.

For what’s a fairly challenging line-up, the locals have a markedly relaxed attitude to taking it all in. Most will sit through U.S. Girls and Atom™ in The Other Sound warehouse, while many leave their bikes unlocked in a huge parking lot for the day before riding them home.

The resultant atmosphere surely helps Cat Power turn in a jubilant Friday performance that erases all memories of her awkward June show at London’s Roundhouse. The smiling face that saunters its way through ‘3 6 9’ and ‘Manhattan’ is almost unrecognisable from the awkward visage of two months ago; radiant with the joy of being on stage it’s enough to make you genuinely happy for Chan Marshall’s apparent well-being. Drawing her hour-long slot to a close on ‘Ruin’s bouncing piano riff, arms are raised aloft and white flowers are thrown out for them to catch in a touching display of mutual appreciation. It’s the kind of festival moment that we have to wait until Sunday to experience again. Angel Haze may cut short her set after 30 minutes citing poor health, but throat issues don’t stop her from diving into the crowd, acting up for the assorted photographers and creating the kind of fervour usually reserved for black metal round these parts.

So enamoured is Alana Haim with Haze’s spitfire flow, she engineers a one-woman stage invasion dropping to her knees while the ‘New York’ rapper carries on unfazed without dropping a bar. Haim themselves turn in decent show in front of a rammed Black Tent despite their sickly lead singer Danielle passing on vocal duties to bassist Este for ‘Falling’, and ‘Don’t Save Me’ being dropped from proceedings altogether. Completing the trio of much-hyped best buddies, at least according to Facebook, is Grimes; the last act to perform on Sunday evening. As much as we appreciate the intentions behind Claire Boucher’s DIY pop project, it leaves a lot to be desired in live form. With the Canadian tethered to her twin synth set up, two conceptual backing dancers are relied upon to carry the show on spectacle alone.

This might have worked if they were in any way in sync or the likes of ‘Oblivion’ and ‘Genesis’ weren’t subsumed into an infinite vocal echo loop, but alas it wasn’t to be. For all the lip service Grimes pays to Taylor Swift and J-Pop, she’s yet to write a real crowd pleaser.

Thankfully for Flow, it rarely put a foot wrong when straddling the line between intellectual stimulation and toe-tapping motivation. Rather than cater for Helsinki’s population in one indeterminate line-up designed to shift tickets and please no one, individual genres were catered for with choice bookings like Public Enemy and Goat. All of Helsinki was welcome and every one of the revellers we encountered seemed to be drunk on fun, which is just as well considering Finland’s prohibitive alcohol consumption laws.

Pulling off an impersonal gathering on a massive scale is really very easy. Downsizing a 61,500 attendee event into something intimate and communal almost isn’t worth the effort. Credit to Flow’s organisers for going above and beyond the call of duty. If you can’t stand the sight of industrial dumpster trucks, this is the festival for you.