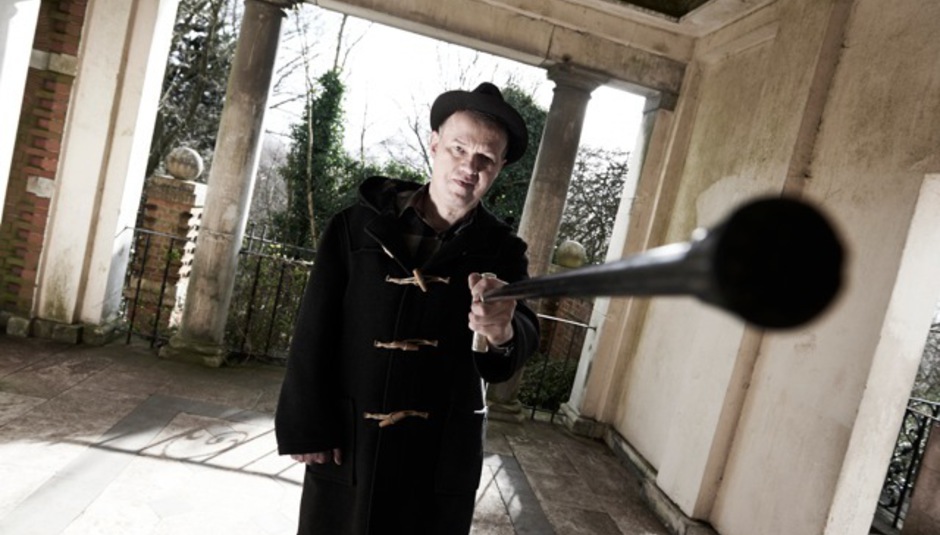 It’s August 2011. I’m at Derbyshire’s Indietracks festival, mainly because one of the bands (Zipper from Madrid) gave me a free ticket. But charming music, all-night parties and the loveliest people – I’ve about 10 new best friends – have made it the mother of all punts. Now we’re crammed into a huge barn (the generator on the main stage has blown) waiting for the headliner, Edwyn Collins, to appear. Everyone’s slightly sloshed (well, I am, anyway) and there’s a lot of idle talk and nervous energy. We’ve all heard about Edwyn’s 2005 stroke and, quite frankly, haven’t a clue what to expect.

Edwyn and band make their entrance. He perches on the amp centre stage, eyes the crowd...and as soon as he starts singing, all uncertainty recedes before the power and conviction of that voice. His band, which includes Sex Pistols drummer Paul Cook, are exhilarating. There is so much warmth emanating from the stage; they seem like one big family up there. The celebratory feeling is infectious, seeping into the crowd.

Even after a double brain haemorrhage, Edwyn’s legendary wit shines bright. He speaks to the crowd often, a little haltingly and occasionally forgetting what he wants to say, but deliberately making us laugh even in moments of vulnerability. His eye for the absurd is as keen as ever.

When Orange Juice favourite ‘Rip It Up’ plays, there’s an eruption of communal ecstasy, while ‘A Girl Like You’ is transformed from ubiquity to life-affirming triumph. It’s the perfect end to a perfect weekend.

Indietracks 2011 was the final date on a tour supporting Losing Sleep, the first album Edwyn wrote after falling ill. It turned out to be the last time he would play live. Until now, that is. He’s touring once more in April on the back of his latest album, Understated, which is released this week.

Meeting Edwyn Collins (and his jovial, chatty partner, Grace Maxwell) at his studio in Kilburn is a humbling experience. Sure, part of it’s the incredible recovery; Edwyn has returned from the brink – in hospital, he told Grace that he felt he’d experienced death – to not only survive, but be producing bands, running a label, and writing some of his best ever music. But being with a true music legend putting out his ninth record should be, and is, humbling enough in itself.

The first record Edwyn released after his stroke, Home Again, won him a rare amount of attention; with themes of suffering and healing, it was tempting to see it through the prism of his illness, though it was actually written and recorded beforehand. Compared to his previous work, it’s acoustic and folksy, much of it inspired by the newly purchased house, Helmsdale, in far-flung northern Scotland, which had previously been in Edwyn’s family for generations. Edwyn, however, struggles to recall Helmsdale’s influence on the record.

‘Because of course he’d written it and recorded it before falling ill,’ explains Grace, ‘but the detail of it...’

‘You did say that there was a lot of Helmsdale in Home Again. It has quite an earthy vibe. With Dr Syntax [the preceding sixth album], he’d given up on the idea of playing it live because it had so many studio effects. At that time, he had the studio just how he wanted it.’

‘But with Home Again, I was ready to do gigs,’ Edwyn recalls.

‘Home Again was much more suited to playing shows,’ says Grace. ‘We said we’ll be ready to tour again – because we hadn’t toured since ’97. It was funny, you were moving into a new phase, but before you could even mix [the record], disaster struck.’

It was some time after Edwyn’s severe stroke that he was able to even think about music again. A fantastic BBC documentary shot during his recovery shows him delighted to return to the studio over two years later. But it’s seen by him and Grace as a ‘rocky time’.

Grace: ‘At that point everything was a bonus. Now here we are in 2013 frankly taking everything for granted again. We don’t even explain it when we meet people.’

‘Everything’s back to normal!’ Edwyn laughs, a little ironically.

Sebastian Lewsley, the talented engineer who since his teenage years has worked with Edwyn, remembers his return to music as being ‘stages’: singing again; playing live; trying to finish Home Again.

‘I was trying to mix it and couldn’t get it right,’ Seb says, ‘and you didn’t know why it wasn’t right.’

It was a year before they were able to come back to Home Again. But Edwyn made it to the other side. Losing Sleep, the record to emerge out of his return to music, is a testament to that. Grace calls it Edwyn’s ‘party album’.

‘Was it, really?’ Edwyn cries, incredulously. ‘I was getting myself together. I don’t know exactly what’s going on at the time. It was not easy. For example... [now] talking is easier, but with [Losing], I [had] trouble to communicate. My talking is still not good... With Alex Kapranos [who worked on Losing],’ Edwyn adds, ‘there was no problem to communicate and explain, erm, “I want something fast”...’

Grace: ‘Edwyn would have the bones of an idea, and there was no problem collaborating. When we started, I didn’t know how it was going to work. But then every time someone came to the studio –’

Music is one of the purest forms of communication, after all.

Edwyn: ‘Yeah, with music, it dawns on me. No problem to communicate there.’

Grace: ‘It was a beautiful thing, it really was. I think everyone came into it with a lot of love for you. Weirdly the reflection of Home Again was gone; there’s no misery with Losing Sleep. You were really happy at that point. Edwyn was getting so much of his life back.’

The new album, Understated, however, is a very different beast. With fewer collaborators it sounds more focused, even darker. Songs like the compelling, world-weary ‘31 Years’ – on which Edwyn actually plays Memphis chords for the first time – are full of reflection. ‘It’s more “me, me, me,”’ as Grace archly puts it. ‘Stop it, Grace – enough!’ Edwyn retorts. ‘Why not celebrate me?’

‘Losing Sleep, some people might say it’s simple – me. [With] Understated, I’m [improving],’ Edwyn explains. ‘Losing Sleep, I’m trying to say, “What’s wrong with me?” I had a stroke...erm...couldn’t express the right meaning. Now with Understated, let’s say I’ve not got... before my stroke I was fluent, now it’s different; but Understated says much more of the meaning [I want to convey] – more of what I’m about.’

‘I think you’re trying to get into more developed themes,’ says Grace. ‘It’s part of your recovery, trying to develop.’

Remarkably, music seems to have been a ‘terribly important’ component in Edwyn’s long-term recovery. ‘Music is my life,’ he insists. ‘And music is my joy. And music means everything. So.’

‘You know what I think, don’t you?’ Edwyn’s stalwart partner interjects.

‘You have incredible stimulation from your work. There are so many that have a brain injury like him who can’t go back to what they used to do. Well, no one can prevent him doing music.’

Such is evident on the BBC doc’, which culminates with Edwyn playing his first live show post-stroke at Dingwalls in Camden Town. Not long before this performance, the record label representative tried to pull the plug – much to Grace’s chagrin: ‘Why do you think after meeting him five minutes ago you have the right to decide?’ – but despite some shaky rehearsals, Edwyn insisted on playing. Delivering old Orange Juice numbers with aplomb, it seemed he’d been saving the best until last:

‘Because he’s a big ham,’ Grace opines, who admits to being sick with nerves before the show.

‘Thanks for that, Grace!’ Edwyn laughs.

Orange Juice songs were peppered through the set at Indietracks, too; there seems to be none of the resentment towards his older material that some artists feel.

‘Why not?’ Edwyn says. ‘I’m proud of Orange Juice. It’s past, yeah; I’m pressing on with the new stuff, but [remembering the] old stuff, too.’

‘In the past there was a bit of digging your heels in, “I won’t play that,”’ Grace recalls.

The deceptively simplistic, enormously successful ‘A Girl Like You’ changed Edwyn’s fortunes, becoming an international hit that enabled him to tour the world, set up this studio and worry less about finances. That it’s the main song he’s known for in mainstream circles is only a little ‘tedious’. Edwyn does deride the fact that it came at the tipping point of Britpop in 1995 – ‘Britpop, it was a nonsense!’ he scoffs – but I remind him that there’s something timeless about the song. It was ’95, but it could have been ’85 or even ’75. It’s like a spatial anomaly that doesn’t belong to a time or place, or maybe even an author – people often think it’s by Iggy Pop or David Bowie.

Nowadays, though, it’s worth remembering that a discerning audience is familiar with large parts of Edwyn’s repertoire beyond ‘Rip It Up’ and ‘A Girl Like You’. While Orange Juice didn’t have huge commercial success, there’s an impressive legacy.

‘Is there?’ Edwyn asks, incredulous once more.

Well, after all, he’s influenced a lot of bands. Orange Juice have a special place in – ‘History?’ Edwyn laughs – which, no doubt, is why so many big names wanted to help on Losing Sleep. ‘It’s incredible,’ Edwyn agrees, ‘these guys – Franz Ferdinand, Johnny Marr [an OJ fan since his teenage years], The Cribs, The Drums – are all brilliant.’

I wonder if it’s frustrating, though, that with so much of a legacy, there isn’t more fame.

While mainstream fame may not be forthcoming anytime soon, there’s plenty of anticipation for the new album and upcoming tour dates. Edwyn will be reprising Orange Juice numbers again, as well as some of his older solo material, including, Grace winks, a song called ‘Ghost Of A Chance’ from his first LP, Hope And Despair. It was written nearly 15 years ago, but a line like, ‘Sound of body and of mind / And what’s more, I’m witty and refined’, would be ever so poignant if written today. I suspect that the irony is not lost on Edwyn and Grace, and is part of the reason for its selection.

The truth is that Edwyn’s sense of the absurd, and themes of soul-searching and redemption, permeate the whole breadth of his work. And yet it remains so tempting to view his latest material through the camera obscura of stroke/recovery. For instance, the gentle ballad ‘Forsooth’ contains the line, ‘I’m so happy to be alive’ – a seemingly obvious reference to his survival.

‘“I feel alive and I feel reborn...”’ Edwyn sings, as though calling the song to mind. ‘[Sure,] you could say that, but it’s not [necessarily] about the stroke at all; it’s about seizing the essence of life.’

The same, I suggest, could be said of ‘In The Now’, a gritty number about cherishing the moment; such an existential rumination would not be out of place on any Edwyn album.

‘He’s not one to dwell. You’re always about the next thing,’ Grace says.

‘Yes,’ Edwyn concurs, with an emphatic wave of the arm.

Indeed. It’s time to move on.

Understated is out this week.