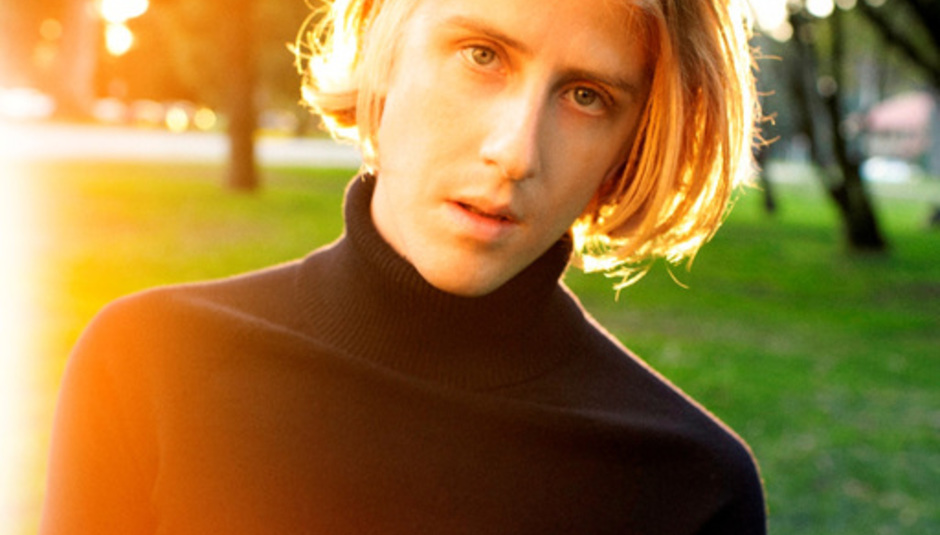 Emerging just six months after the shock dissolution of Girls, Lysandre is in many ways a curious album for Christopher Owens to release under his own name for the first time. Following the expansive, rapturous ‘Father, Son, Holy Ghost’, Lysandre’s less-than half an hour of wistful arrangements and girlish backing vocals can easily scan as treading water or even regression for Owens, whose creative momentum seemed unstoppable, making vast leaps in ambition and maturity with each new Girls record he released. For all its merits, Lysandre – telling a road trip story set in 2009 - comprised of material written around the same time – acts as a slightly uncomfortable opening statement for Owens as a solo artist, and raises an array of questions about his motivations for leaving Girls, as well as for releasing an album like Lysandre.

"It’s possible that it wasn’t the best first album to do", he concedes without any real provocation, "but I don’t really care. I could have gone and picked my ten best songs and done that just to prove a point, but I didn’t really want to. I wanted to do this album because it had been waiting for a long time, and I’d been thinking about it forever". A phrase Owens keeps returning to over our time together is that Lysandre is “just an album”. By one token he fully embraces the work, defends its slightness, and unquestioningly considers it to be his first ‘proper’ solo LP in spite of the age of its material. But he’s just as eager to resist being defined by Lysandre. “It’s just one idea”, he keeps reiterating. “It’s not what I want to do forever or anything like that”.

“I really like it – to me it’s perfect, but that’s not the way everyone’s going to think about it. I’m happy with what I did, I wouldn’t change that, and I do consider it a very important album of mine. I think over time it’ll have more importance. Right now people are thinking about it with other things in mind too... like the whole leaving the band, all kinds of things on everyone else’s mind. But to me everything’s very clear, so I don’t really think about it the same way... I think it’ll make a lot of sense in the long run. I’m just going to make projects which are very important to me, maybe very different to each other, maybe weird, maybe quirky – but they’ll be very big pieces of me”.

Owens’ music has always sounded like a very sincere and personal form of self-expression, and so it’s no surprise to hear him speak of Lysandre in the same terms. I introduce the idea that Lysandre has perhaps adopted a certain duality of meaning over the last year, as he plays songs about his first ever tour on what has turned out to be his first ever tour as a solo act, and that songs like ‘Part of Me’ might now feel like they look back on his time with Girls, just as much as it looks back on his time with the album’s namesake. Owens, however, is keen to preserve the importance of the original sentiments. “For me it’s still about what it was written about”, he says. “But it does apply to other things. I guess that’s what everyone does with songs, try to apply them somehow to something they can relate to, so I guess I have to do that myself. But they’re still very much about the original story for me”. In spite of the obvious parallels between the album’s narrative and Owens’ present day circumstances, Lysandre is still very much a time capsule of the love which he put into the songs at the time they were written.

One of the biggest confusions about Owens’ departure from Girls is that, on the face of it, going solo didn’t really seem to address Owens’ professed grievances with his former band. Owens frequently cited the revolving door of up to nearly thirty musicians over four years as being a barrier to feeling comfortable with Girls as an entity, and indeed he speaks along similar lines today. “It became clear to me that it just wasn’t going to happen”, he admits, “this ideal of finding a band like the Stones or the Beatles, not just hiring people who haven’t even played on the album. That just didn’t really feel right. A genuine, no-lies band never really happened. Girls was supposed to be a band, and I didn’t want to keep the façade of the band going when it wasn’t going to become that, and it’s something I became OK with”. There appears to be a contradiction, however, in that rather than making steps towards his former ideal, Owens has removed himself to a situation in which his co-musicians are impermanent by definition. Deeper conversation, however, teases out the subtleties of Owens’ grievances with Girls which reconcile this apparent contradiction, and it flows from the inflexible visions Owens has for his music, which in turn ultimately emerges from the intensely personal nature of Owens’ songs.

“When I write the songs, I can pretty much right away hear how I’d like them to sound... and the only challenge going into the studio is making sure you get that right. There were certain elements of [making the decision to go solo] that were to ensure that those ideas would come out properly. For example, the gospel backing vocals was met with a lot of resistance from other people in the band, the label, everybody around. Part of going solo is that when I write these songs, I know how they’re going to sound, and I didn’t like the idea that over time people were going to get more control over how they sounded... If you have a band that really starts to become a unit, then it becomes important to let each person do what they want to do. If you’re the Cranberries or something, you get this sound over time and it’s really important to work together and do that. But because Girls was just two permanent members and almost thirty people over four years, it was hard to give anybody else a lot of creative liberty, because they wouldn’t stick around”

Owens speaks at length about the tensions involved in recording Father, Son, Holy Ghost with up to three producers trying to reconcile opinion on a single guitar effect, and the pressure to stray from his own visions of the songs by bending to the will of band mates. “It definitely wasn’t as easy as recording Lysandre”, he admits freely, and with a definite sense of relief towards how things are now. Owens sees breaking solo as an opportunity to assemble the right collection of musicians for each album, best reflecting the ideas and sentiments which they happen to contain. For an album like Lysandre – an unsure, vulnerable, coming of age love story – the whimsical flutes and meek backing vocals are just as perfect a sonic fit for the material as the powerful gospel and enrapturing organs were for more universal sentiments like “come into my heart, my love”. But it’s a stark disparity in texture which Owens felt he would have had to have fought for as part of Girls.

“Over the years of writing, I learned that I have a lot of different ideas, and I’m very excited to work with totally different people for totally different records, and to call the songs my songs. It feels like a more honest way of presenting things”, he says. And you can begin to understand how the arduous process of mediating competing influences and opinions throughout the recording of Father, Son, Holy Ghost could lead Owens to make the decision to go solo. He’s putting himself in a position where he can follow completely disparate musical intuitions album by album and tour by tour, without feeling any disappointment or guilt that the musicians aren’t congealing into a democratic unit.

And so if the break from Girls was borne primarily of a desire to retain creative control of his musical visions rather than dissatisfaction with their body of work, it raises questions about Owens’ relationship with the old Girls songs, material which is absent from his current set lists. “I miss playing a lot of the songs”, he tells me “and I’m going to again, but I wanted to take a little time. I felt it would be wrong to just go out and continue playing them on my own right away. After a little while I’ll definitely play those songs again – in a different way, maybe, with whatever line up I’m working with. But they’re my songs. They’re my songs in a very deep way. Nobody else could’ve written those songs. They’re very, very personal songs – they’re somebody confessing, and reaching out as a person. I know I’ll play those songs again because I want to, but I didn’t think it was right to do it right away”.

Again we return to the personal nature of Owens’ music, and it’s easy to begin to see this as the connective thread running throughout all of Owens’ records, no matter how disparate they might be, or under which guise they might be released. “I think maybe in five years when I have five albums out, this album will make a lot of sense, because it’s a very valid, very large slice of me. They’ll all be like that, but all very different from each other. There are lots of sides to show, lots of ideas to do, and I think it will just be clear that Lysandre is one idea that I wanted to pursue, one project”.

Going solo is what allowed Owens to pursue this particular project. With a changing band of people struggling to agree on the track listings of Girls records which “were never really designed very thoughtfully”, not to mention arguments over instrumentation, an album like Lysandre could never have existed as a Girls LP. It’s a record where the close unity of the arrangements and sequencing combine to tell an intensely personal story grounded in specific time, space and feeling – a record which could not have emerged from a creative process of compromise and democracy. And so for all his achievements in lacing songs with heartfelt emotion and experience as part of Girls, going solo has allowed Owens to give his listeners even more of himself, without having to refract anything through the influences of others – a promise of even more intensely love-infused music for which we should be lavishly grateful, and truly excited.

Lysandre is out now via Turnstile.