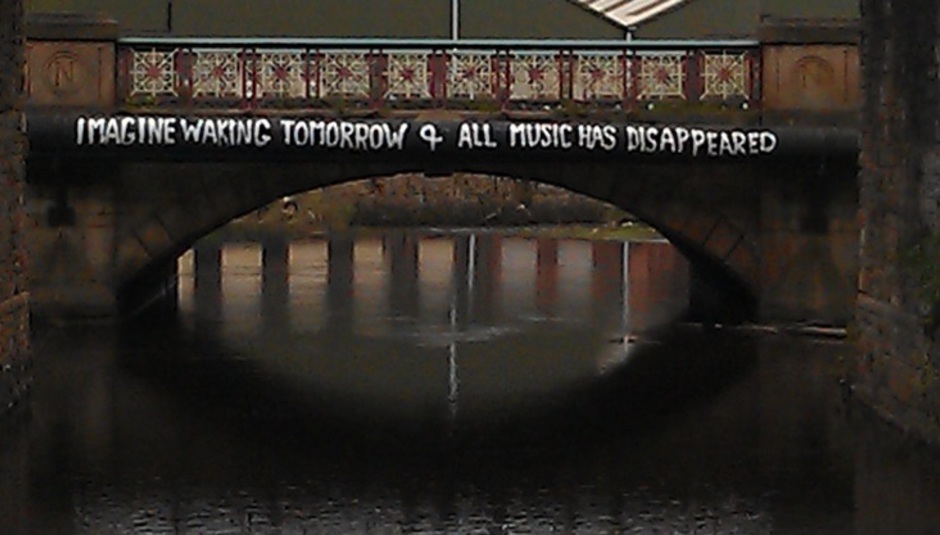 Welcome to the ninth instalment of Drowned In Sheffield - the unexpectedly bumper-sized summer edition. Hooray!

Normally I'd use this space to ramble/rant about some local goings-on or plug something that it wouldn't make sense to mention elsewhere on the page. However, it's come to my attention that there's been an abnormal amount of excellent stuff released by Sheffield acts recently, with plenty more to come in the next few weeks - and all of it's worth mentioning in this here column. In other words, we've got lots to get through, so why not hit play on our handy video playlist and we'll get to it, yeah?

What to get now

FOOTBALL! As you might have heard, there’s a football tournament going on at the moment and, as is always the case, musicians across the planet are doing all they can to cash in on it. But putting our cynicism aside for just one second, we've found that we’re rather fond of Screaming Maldini’s attempt at a soccer soundtrack, ‘Tyrannosaurus Kicks (Just Score A Goal)’. It’s such unashamedly good fun, you imagine it could turn even the hardest football hooligan in your local club’s firm into an over-excited man-sized toddler on a merry-go-round. The band’s new single proper is just as loveable – ‘Life In Glorious Stereo’ sounds like the Arcade Fire if they wrote the most elaborate, over-the-top and uplifting children’s TV show themes imaginable. It comes out this week, ahead of the release of the band’s self-titled debut album in Autumn, and you can hear both tracks on Bandcamp, or in our playlist up top.

The DiS-tipped Hey Sholay, released their new single last week. ‘Burning’ is its name, and it’s as colourful, conscientious and catchy as we’ve come to expect from the band. You can buy it from the usual online stores, or wait for it to appear on Hey Sholay’s debut album, ((O)), in September – just don’t ask us how to pronounce the name of that LP.

Keeping things flame-related, The Hot Soles have released their debut single, ‘Ready To Burn’, as a free download on their website. As well as having one of the most highly-strung vocals we’ve heard in ages, as you'll see in our playlist above, it has an incredibly aesthetically pleasing video too.

Of course, if you’d prefer to watch a goth play with a handgun, why not fast-forward to Dead Sons’ latest video? ‘Room 54’ was released as a 7” at the start of the month and edges the band ever closer to becoming northern England’s answer to Queens Of The Stone Age. Buy it/hear it on Bandcamp, or from your usual online sources.

Blood Sport have put out a new EP, Fruits, through local DIY imprint Tie Dye Tapes. On it, the band are at their experimental best, as they string together fascinating sequences of sharp grooves, sun-kissed beats, disembodied vocals and the funkiest white noise you’ll ever hear. You can buy it on Bandcamp and, as with their last EP, it’s up to you what you pay for it.

Equally as interestingly, the elegantly untamed acoustic duo of Jim Ghedi & Neal Heppleston have an EP on the way. Archipelago is coming out on the newly-founded Little Mesters’ Recording Confederacy label, and it will be officially launched at a gig at the lovely Lantern Theatre on Monday June 25th. You can hear a preview in the shape of ‘Mist On The Morning’ below.

If all else fails, you ought to still enjoy the latest 7” by our new favourite emo band in the whole wide world, Nai Harvest. It’s called ‘Feeling Better’, it was launched at their gig at The Redhouse on Saturday, and you can hear how much it rocks it on Bandcamp, or below.

Don’t forget there are also some excellent albums to look forward to next month: post-punk pioneers Wooderson release Let The Man Speak on July 16th (preview it here) while guitar-pop poets The Crookes release their fantastic sophomore effort, Hold Fast, on July 9th.

What to go see

Obviously, Tramlines is happening next month. It’s probably not even worth mentioning here since I can’t imagine there’s anyone reading this column who won’t be going anyway, but still… Since we last spoke there's been a load more bands announced, including a whole heap of local names that regular readers of this column will recognise, plus plenty more that we’ll undoubtedly end up featuring in the future. For now, we’d recommend watching:

Here’s what else we’ve got to look forward to over the next few weeks:

Who to look out for

You might already be a fan of the Bhurgeist brand of lo-fi indie-punk. If so, you’ll enjoy Collider, the band formed by Bhurgeist’s Adam and James. So far there’s just the one track up on Bandcamp, but it’s called ‘You Didn’t Think This Through’ and it’s a grotty little gem of a track, it is.

If you're a folk fan, we'd recommend this eloquently colloquial split EP from Five Leaf Nettles (a.k.a. Jack Collister, the drummer from Best Friends) and General Wolf (who I can’t really find anything about in the internet). If you like this, you should keep an eye out for Five Leaf Nettles’ next split EP with Nai Harvest.

Pet Rock, meanwhile, is a band that’s been formed by members of two of our other favourite bands in Sheffield, Avida Dollars and Love At Death Beach. All we’ve heard so far are some demos on Soundcloud, but these shady slacker sketches have got plenty of pop promise.

Pjaro show a great deal of potential too, with their scuffed up, emo-tinged instrumental offerings available on Bandcamp.

Finally, the brilliantly loud brothers of Drenge win the official Drowned In Sheffield Song Title Of The Half-Year Award for ‘People In Love Make Me Feel Yuck’, and the video for it is definitely worth two minutes of your time: