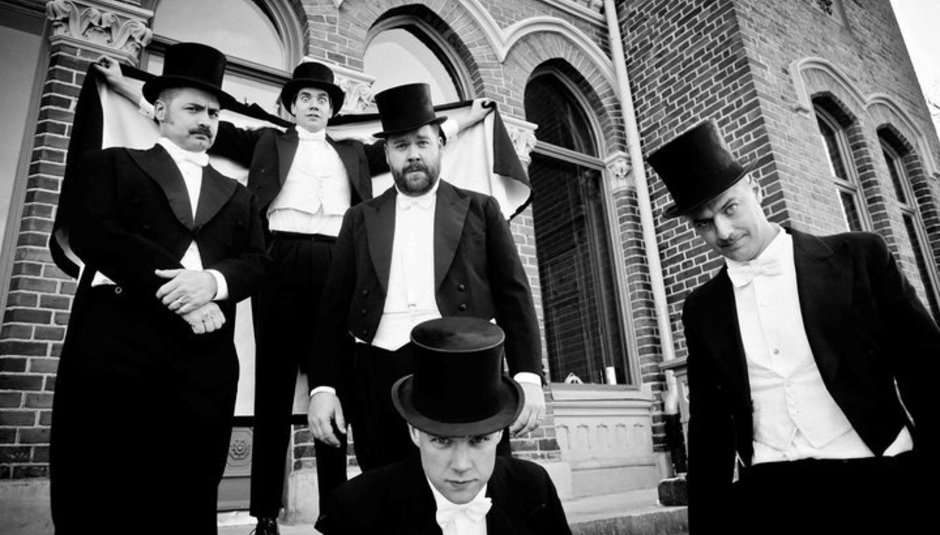 The Hives are a rock and roll band. This much the Swedish five piece were very clear about when they sat down with DiS a fortnight ago in an opulent London hotel. It was also wholly apparent two days later at the Borderline, when Howlin' Pelle Almqvist and co. held a small but sweaty mass in rapture with songs old and new.

The new songs were from the band's fifth album Lex Hives (out next month). It's a classic Hives record and one which its creators were eager to talk about, when they weren't blathering on about top hats, peanut collecting and bands reforming half-heartedly.

In fact, The Hives got so excitable when we thrust our dictaphone in front of them that we had to split our chat into two parts. Trust us, what follows is both a revealing and hilarious insight into one of the few remaining loud and proud guitar bands.

How are you finding London? How long have you been here?

Chris Dangerous - CD: A few hours. We just flew in hours ago from New York so we’re a bit fucked up.

To borrow a quote from your live shows, are The Hives still 'the best band in the world'?

NA: The best band in the world and still the youngest band on the main stage, apart from the Arctic Monkeys.

PA: Yeah, they’re sometimes the only ones playing who are a little younger than us. We’re going off in different directions here but I think it has to do with when people stopped buying records there stopped being promotional money for new bands. Therefore, it’s just the same bands. Nothing happens on that line-up.

PA: Yeah we’re doing great. As far as Lex Hives goes I think it’s our new favourite record. Also, we’re one of an extremely small number of bands playing rock and roll. They’ll call other bands rock bands but eeeeeh wrong. A lot of bands it’s pop bands with loud guitars which they think is rock but it totally isn’t.

What do think makes a rock band?

PA: Well it’s actually a technical thing, like it should be blues based or it’s not rock and roll.

CD: It should be rad-ass too.

I like your new top hat and coattails look. Where do you get your top hats from?

PA: Christie’s in London. The UK you nailed the top hat. It’s one of the things the UK does best.

One of our finest achievements alongside the monarchy...

CD: You’ve got the top hats and then those furry things, not the Beefeaters. [The Bearskin hats worn by Buckingham Palace Guards]

NA: What are those things called, they’re really fucking good.

PA: I think you nailed hats in the UK. The bobby policemen hats are pretty great too. It’s a helmet... I think we’re going to call ours a top helmet and use them to go to war.

You were saying this is your best album to date, I think this is probably your best look to date

PA: Well it’s tried and tested and it was bound to happen as it’s one of the great classics of formal wear. We’re really into formal wear for a punk band.

PA: Yeah why would you want to look better when you’re not on stage? That always seemed lame to me and also more of a lie, more of a hypocrisy.

PA: So I think this is now proven that it sounds good when you wear the same thing.

NA: Little Richard would wear a cape made out of mirrors throw it into the crowd and people would cut themselves on it.

PA: But it looked good under the lights.

It’s been 5 years since The Black and White Album. Why the gap?

PA: Well it’s usually four years but five is longer than that so I guess it requires an explanation. There was a lot of touring on The Black and White Album, I think it also feels like a long time because we didn’t do as many interviews on The Black & White Album as we have done in the past because of all the touring but we have to feel like we’re inventing the band again. It ends up that we invent the same band again but we want every album to feel like a debut album. We don’t want to write in the studio, we want to disband for a while.

How do you recognise when you’re done with the old Hives and need to invent the new Hives?

NA: It’s like choosing between two fun things because it’s fun making records, the part of reinventing the band, but we also like the thing of being physical with music. Rock and roll music is supposed to be physical and we like that. On The Black and White Album we toured for two years which is normal for us but on the third year we did a lot of festivals and stuff. I guess we just missed that being physical part.

When do you stop being The Hives? Presumably you’ve got to switch off to start again. What do you do in the time in between records?

PA: Different things, some band members will use a hobby to reset their brain.

PA: It could be anything because being a rock band, we’re pretty obsessive guys so you have to reset your obsession on something else a little bit in order to be at your best. I’m really bad at coming up with hobbies, I just wander the streets aimlessly for a few months. It’s very much classical hobbies actually.

Who does ice hockey?

NA: I do ice hockey.

Are you any good?

PA: He’s great at playing rock and roll guitar. Most people can only be great at one thing at a time.

It seems like a smart move for you to self-produce Lex Hives. When you’ve used different producers in the past, the results have always ended up sounding like The Hives

PA: Well yeah, even when other people have produced, we can’t keep our fingers out of it.

CD: We can’t shut the fuck up you know. Like you were saying, it doesn’t matter who tells us to do something, it’s still going to sound a certain way.

The new single is called ‘Go Right Ahead’. Can you tell us what it’s about?

Because, most Hives songs you pick up by the first chorus but I was wondering if there’s anything more complex to it that people won’t notice?

PA: Well there’s always thing of you say something and then the guys say, ‘Go right ahead’. There were a number of different phrases which we whittled down to make the song. It was just one of these really funny things to write lines for.

NA: It’s like we would always collect the best opening line for a song like Iggy & The Stooges’, “I’m a street walking cheetah with a head full of napalm” or the Rolling Stones’, “I was born in a crossfire hurricane”.

NA: We played the song to a friend of ours, Jesse from the Eagles Of Death Metal and he was like, ‘But it’s so polite’.

PA: Basically it’s about doing whatever you want to do and that’s a true tried and tested rock and roll sentiment but you can say it in a different way. Also, I love songs when you can come up with your own verses. A while ago there was a Nick Cave song called ‘I’m on Fire’ that was really long and it went ‘The janitor with the bucket on his head says la de da da dah says “I’m on fire”’.

NA: Maybe it’s a polite way of saying this revolution is endorsed by The Hives. Do whatever the fuck you want to do.

You’re self-releasing the album. How did that come about?

PA: We’d fulfilled our contract basically and at the rate they were paying us and the way the music industry was doing, there was no way they were going to pay us that much for another album.

CD: Basically, now we have people who are Hives fans in different parts of the world who work in record companies which aren’t necessarily the same ones.

PA: Interscope was a complicated thing because it was all run out of the UK and the US, so if you do really well in France. France would have to ask the US if they could work on the record.

CD: We’re still on Universal Sweden like we were before too.

NA: It became a problem when the record company were saying the record’s doing really well and you could come over here and tour a stadium but we’re not allowed to work on the record any more because we’re working on something else.

When most bands self-release an album it’s almost their last throw of the dice. This sounds like business as usual?

PA: Yeah we keep going forward because if you don’t do that you quit. If you quit you’re just going to end up reforming and making a fool out of yourself. Plus, we have no reason to quit. We’re in a great band. We’re doing well and we have fans all over the world. I don’t see why you’d want to quit that.

Why is reforming making a fool out yourself?

PA: Maybe it’s not but sometimes you reform, you’re out of shape and you haven’t played together in 10 years it’s like, ‘How well are you going to do?’

Are you saying that with any bands in mind?

PA: Probably but I’m not going to say.

NA: But we’ve seen a few bands reform and it’s great. The Refused reunion has been brilliant so far, they’re getting into it more and more. They never played that well when they were around and now they’re better than they were before.

I’ve read you’ve been quite critical of reunions and it surprised me because The Hives are a band where if the audience are enjoying themselves, you’re enjoying yourselves

PA: I have nothing against bands that reform at all. I think that’s what you should be doing if you were in a great band, because it’s really fucking fun.

CD: Put it this way the Refused thought they could do it and rehearsed a really long time before they came back. Some bands don’t do that.

This is slightly off topic but I saw the Backstreet Boys at the O2 last night..

[The room erupts with laughter]

PA: Were they good?

They were fun, they’d rehearsed it to an absolute tee

PA: That’s how you do it. I thought the Pixies reunion was good because they played everything exactly like on the record and that’s what you want out of a reformed band.

Sadly that's also where the first part of our chat with The Hives ends. We haven't just left all the dregs until Part II though. To prove it, we'll leave you with a collection of choice quotes you'll want to see explained...

"There was a nurse called Troll who would wake me up once an hour by flashing a flashlight in my eyes to see if my pupils were dilating or not."

"It’s like a pole vaulter going for the 100 metres. We’ve been practising other shit for such a long time."

"That’s the part when you’re basically throwing up because of the pressure."

"No one’s having any fucking fun. They’re all whining."

Lex Hives is released on 4 June through Disque Hives

"So I jumped and landed on my head on...