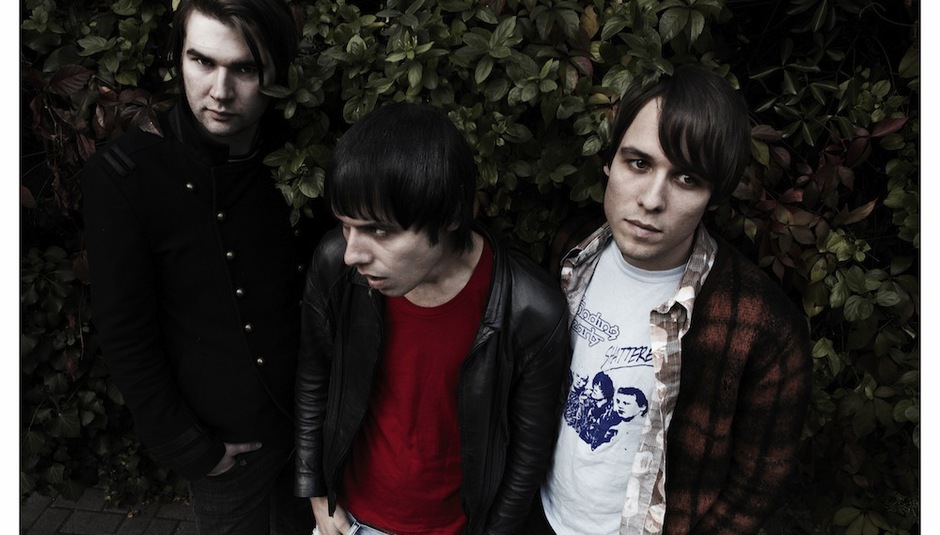 As part of their week-long takeover of the site to celebrate the release of new album In the Belly of the Brazen Bull, The Cribs have compiled us a little list of seven bands you need to hear now.

Teeth is a band that I have been championing ever since I met them at Steve Albini’s EAR studios (they were in just before we were), and their album The Strain is something I feel very passionate about. It has affected me like nothing else musically for a while.

They were founded by multi-instrumentalist and vocalist John Grabski, with his brother Benjamin providing bass and some extra instrumentation. Their music is very raw, dark, and passionate. And HEAVY. For fans of Melvins, Shellac, Jesus Lizard and Nirvana I reckon. Albini's stark recording, as well as the bands unadorned, sparse approach is a perfect fit for the sincerity, harshness, and intensity of the songs. John was battling terminal cancer, and it is his experiences with this that inspired him to write these songs and make a record. I communicated with John regularly after we met, and later sent his music to Everett True, who dubbed it ‘The finest fucking Grunge I have heard in many a decade’.

Unfortunately, it was later Everett who informed me that John had passed away at the beginning of March this year, just short of seeing his album released. A terrible shame. It is very powerful stuff, and just an amazing record that I would love for people to hear.

The Blanche Hudson Weekend are a brilliant new band from Leeds, formed by Darren Lockwood and Caroline McChrystal. As a fan of their previous bands, The Manhattan Love Suicides, and (my personal favourites) Pop Threat, I have followed these guys since about 2000.

Pop Threat were a harsh, noisy, and experimental ‘shoegaze’-y band way before that was a somewhat fashionable thing to do (which definitely used to rub people up the wrong way), and they were certainly refreshing in turn of the millennium Leeds. I loved them in a fashion that people would maybe now dub to be ‘fanboy’-ish. When they broke up I was downhearted, but only until they formed the Manhattan Love Suicides shortly after, which continued on where Pop Threat had left off with the noisy guitars, but with more of a Velvets-esque pop-side. They released a whole slew of 7”s in their short existence, before calling it a day and morphing into The Blanche Hudson Weekend.

Some have referred to the Blanche Hudson Weekend as being ‘twee-pop’, but I think that does them a dis-service. The guitars range from jangly to noisy, but there is nothing particularly twee about them. They seem dark while being pretty and poppy at the same time. They put out an extensive compilation of their 7”s last year named Reverence, Severance, and Spite and it is brilliant. ‘Let Me Go’, had it been released in the 80’s would have been a smash-hit, and ‘Crying Shame’ sounds like a classic lost girl-group song.

All Smiles is the solo project of Jim Fairchild, who you may know as the guitarist from Grandaddy.

His music with All-Smiles is quite a different proposition from Grandaddy, being very textural and with lush arrangements and harmonies, often including keys and strings. You can occasionally identify fingerprints of his other current band, Modest Mouse, as well as peers such as Built To Spill. He has historically worked and collaborated with various musicians on his recordings, but it seems as of late that the band has stabilised to a degree with Fairchild and Joe Plummer from Modest Mouse/The Shins remaining constants.

Because of his somewhat wandering lifestyle, due to touring and several re-locations, his records are usually made over a period of time in various different places, which I think helps to inform these very personal and sincere songs. I was part of the band when he was based in Portland and feature on a couple of the tracks from his latest album Staylow and Mighty, which was a great experience, and definitely turned into something I am proud to have been involved with.

Jim is a great talent and awesome guy, and I can’t recommend All Smiles enough.

Hurry Up are a brand new band from Portland, comprising of Kathy Foster and Westin Glass from The Thermals (on drums and guitar/vocals respectively), and Maggie Vail of Bangs (on Bass/vocals).

The first time I saw these guys was in a small basement club and I was really blown away by their energy and power. There’s something I love about 3-piece bands and these guys are a classic super-tight power trio. Musically, that evening I was convinced that they were like a modern-day version of The Germs or something, all momentum and aggro guitars with killer melodies. Now I have seen them a few more times I realise that there is more of a north-west influence running through them than that, which made me love them even more.

They have just recorded an EP in their basement which will be released on Josh from Deerhunter’s label sometime soon I believe.

I don’t know a whole lot about these guys, other than they opened for The Cribs at our show in Toronto recently, and we loved them.

Toronto natives, they are a 6 piece avant-garde band who are actually a lot of fun, lacking the pretense that can sometimes be attendant with avant-garde music. They reminded me a bit of Needs New Body in their almost freeform song structures and bizarre changes and flights of fancy, and at other times Deerhoof, in the moments when snippets of strange pop emerged from the noise from time to time. They were fundamentally heavier than either of those two bands though.

On-stage they all line up next to each other and look like a bizarre gang of misfits... a gang in the fact that they all seem very committed to the same unusual goal. And I think that’s awesome.

These guys have been referred to as something of a super-group, being the side project of Nick from Unicorns, Ryan from Man Man, and Joe from The Shins/Modest Mouse, which I think is quite a burden to put on a band formed out of 3 friends playing together purely for fun, and as an outlet from their other bands.

I love Mister Heavenly’s first and so far sole LP, because it really captures that feeling of the excitement of a new project, and the period of spontaneous creativity that goes along with it. The songs range from innocent and poppy sounding 50’s high school prom rock ‘n’ roll, to sinister and weird doomy stompers – which makes the ‘doom-wop’ moniker seem absolutely correct. Just a great, fun, weird pop band.

I just produced their debut record for them and really enjoyed it, predominantly because I think that it's nice and concise and there's some really good songs on there. We did it all live as that is the way that I like to record bands and it fits their particular aesthetic. They seem to come from a very DIY mindset which is very familiar to me and their songs reference bands like The Pastels, Orange Juice etc not just in sound but actually in the lyrics, so that gives you a pretty good idea of where they are coming from. The single they are about to release, '(I Should Be A) Communist', is really fun.