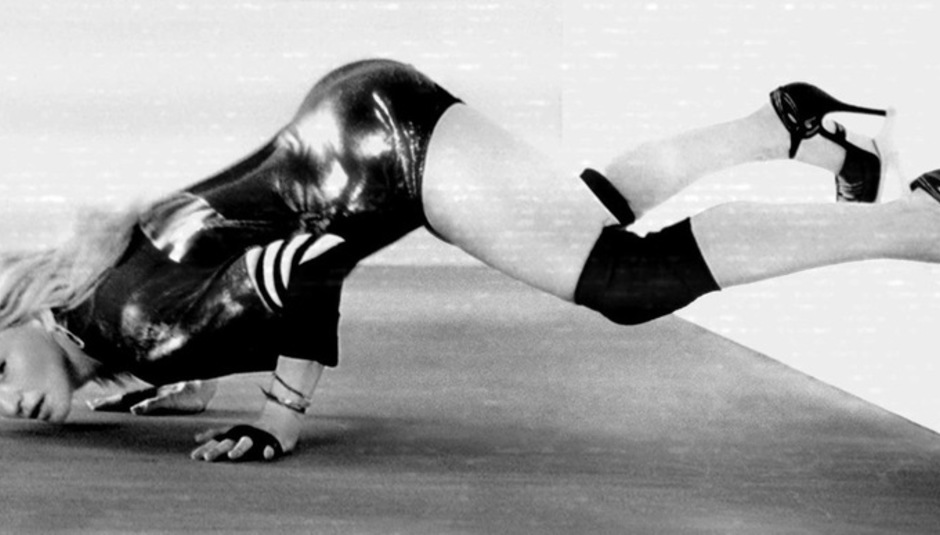 Hello, and thanks for tuning into the sixth edition of DiS Does Pop. The pop music column for those who simply cannot wait for the new Marina & The Diamonds album and the termination of Flo Rida’s career.

This month’s missive is a Madge-tacular affair with a focus on whether the Material Girl is still the Queen of Pop? Since this is the week MDNA is unleashed upon the world, we’ve also made a Spotify playlist of the Body Of Evidence star’s best and most underrated moments on acetate.

That’s not to mention the usual Top 40 Watch and Made For TV gubbins that come as standard. It’s almost as if we’re too good to you. Almost...

Is Madonna still the Queen of Pop?

Just as Elvis was simply ‘The King’ and Michael Jackson was the ‘King of Pop’, so Madonna has been titled the ‘Queen of Pop’. It’s both a recognition of her phenomenal three decades-long career and an easy narrative hook by which her every comeback and fall from grace can be measured. Given the moniker is bandied about so much, we decided to investigate what it actually means and whether Madge still deserves such an illustrious honour?

Rather than give you a straight up answer, we’ve decided to play devil's advocate instead. Mainly because it seemed more fun to nudge and wink at a conclusion than shout it out load. After all, no one understands the power of suggestion more than Madonna.

“Of course Madonna is still the Queen of Pop! All other female popstars are a pale imitation.”

Before we delve into Madonna’s pervasive influence over pop culture, a few statistics for you:

Until any female popstar matches these figures they can’t possibly claim to be the Queen of Pop. To suggest otherwise is as laughable as Crossroads when compared to the triple Golden Globe winning Evita. It’s Madonna’s world, we all just happen to be living in it.

No other performer has managed to manipulate the showbiz world to their benefit while codifying society’s changing attitudes to sex, religion and celebrity. Sure she’s a walking contradiction, able to garner the praise of pro-choice campaigners for ‘Papa Don’t Preach’ and the condemnation of the Papacy which called for a boycott of her Blond Ambition tour. Yet it’s this relentless dedication to controversy and its resulting publicity, that has set a model on which modern popstars thrive to this very day.

Take Katy Perry foaming whipped cream out of her boobs in the ‘California Gurls’ video. Shocking? Sort of, but not quite as provocative as Madonna simulating sex in a wedding dress and ‘Boy Toy’ belt live on stage at the 1984 MTV Video Music Awards. What about Nicki Minaj undertaking an exorcism during ‘Roman Holiday’ at the Grammys this year? It’s a good effort but still not quite up there with filming a Church altar-based interracial sex scene with a Christ-like figure for the ‘Like A Prayer’ video.

Lest we forget, these iconic instances were built on the back of some of the best pop songs of all-time. Where many tracks from the 80s and early 90s heyday of synthetic dance-pop have wilted in the 21st century spotlight, ‘Into The Groove’, ‘Vogue’ and ‘Express Yourself’ remain ubiquitous to this very day. Much as Lady Gaga might wish otherwise. The hits have continued to roll in too, from ‘4 Minutes’ to ‘Ray Of Light’, Madonna’s thriving existence serves as a staggering riposte to pop’s eternal obsession with youth.

In her older, more demure guise, the ‘Hollywood’ star still shines at a record breaking radiance. Her 2008-09 Sticky & Sweet jaunt around the world grossed $408 million, making it the fourth highest grossing tour of all time. Last month, MDNA also broke the record for iTunes pre-orders hitting the Number 1 chart spot in 50 countries. No wonder Live Nation shelled out a mind-boggling $120 million in 2007 for a 10-year deal encompassing all of Madonna's future music and music-related businesses.

If such a formidable legacy combined with her global pull as a live performer does not ensure Madge’s status at the top of the pop pile, then what does? As Nicki Minaj proclaims herself on MDNA’s ‘I’m A Sinner’, “There’s only one Queen and that’s Madonna. Bitch!”

“How can Madonna possibly be the Queen of Pop? She can’t even make the Radio 1 playlist"

Before we delve into Madonna’s waning influence over pop culture, a few statistics for you:

No female popstar who so desperately clings to relevance and fails to achieve it can be described as the Queen Of Pop. To suggest otherwise is as laughable as Glitter when compared to the twice MTV Movie Awards nominated Crossroads.

Being the Queen of Pop is like holding the Olympic 100 metres gold medal; it’s great while you have it but once that title is lost, you’ll never get it back. While Madonna redefined the roles of sex, religion and celebrity in pop music, she did so by pillaging from various pre-established cultural narratives. The sultry blond persona of Marilyn Monroe, the glossy MTV productions of Michael Jackson and Duran Duran, plus a wealth of dance music genres like house, rave and disco.

To deny Madge’s modern rivals top dog status simply because they’re stepping in her footsteps is a line of argument that’s as preposterous as Emeli Sandé’s quiff. Rihanna’s forthcoming role in Battleship may be vaguely reminiscent of the ‘Girl Gone Wild’ hitmaker’s appearance in Desperately Seeking Susan but that itself bore to mind Elvis’ dalliances in Love Me Tender. Likewise Lady Gaga’s 500,000 shifting The Remix album directly emulates Madonna’s You Can Dance, yet this championed a format popularised eight years earlier by Sly & The Family Stone.

If Madonna is not the Queen of Pop, who is? Run through the list of super massive popstars and there’s only one real answer. Katy Perry? Too reliant on her (loose) girl next door image to really push the envelope. Britney? As great as Femme Fatale was, it remains the ‘If U Seek Amy' chanteuse’s lowest selling album in the US to date. Rihanna? Arguably but her definition of ‘shocking’ rarely extends beyond performing in a pair of ‘fuck you’ embossed trainers with the offending phrase written in an impossibly small font.

Obviously, this leaves only Lady Gaga. A woman who deems the best way to arrive at the Grammys is in an egg. A woman who uses her position at the pinnacle of pop culture to pontificate on gay rights via the medium of unicorn-based imagery. A woman who in the space of two album cycles has already released ‘Bad Romance’, ‘Poker Face’ and ‘Judas’. No wonder Madge recently tried to pass her off as "reductive".

Gaga has re-appropriated imagery long associated with Madonna but she’s also clever enough to make what she borrows her own. Certainly, the ‘Alejandro’ video is similar to the promo for ‘Like A Prayer’ when viewed from the perspective that Benedict XVI is going to be adding neither to his private YouTube playlist. Stylistically, the pair are miles apart. Just try to imagine Madonna in a meat dress or Gaga nabbing an Abba sample for her next single. Ed Sheeran will record an album of black metal Michael Buble covers before either happens.

Ultimately, Stefani Germanotta is the current Queen of Pop because of her ability to appear miles ahead of her contemporaries with ideas to spare. Something Madonna used to do flawlessly until she found herself midway through her Super Bowl half-time show proclaiming “I’m sexy and I know it” as the proverbial turd in an LMFOA-themed shit sandwich.

DiS Does Madonna - a Spotify playlist

After the divorce comes the break-up song and, make no mistake, ‘Part Of Me’ screams “broken-hearted” in neon shades of explosive melodrama. In truth, the current UK Number 1 is more of testament to Perry’s star power than the middling power ballad itself. Nevertheless, to celebrate this single’s soon-to-be chart topping status and the Complete Confection re-release of Teenage Dream Radio 1 invited its singer down to Maida Vale for a special edition Live Lounge.

While not a patch on Adele’s triumphant session last year, Perry’s country-tinged ‘Firework’ was a real treat and her acoustic rendition of ‘Thinking Of You’ was not too shabby either. The less said about that ‘Ninjas In Paris’ cover the better though.

There are some veteran rockers who manage to reach legendary status without selling any records and then there's Paul Weller. Sonik Kicks is the former Jam man's fourth Number 1 solo album and, if the critics are to believed, it's one of his best yet. Without wishing to sound patronising, fair play to the Modfather.

In fact, March has been an especially kind month for the old guard with Bruce Springsteen's Wrecking Ball grabbing the top spot and Madonna's MDNA expected to follow suit. Goes to show how polarised the singles and albums markets are.

Whether you think of him as a more chart-worthy Frank Ocean or a day-glo Kanye West, there’s no denying Labrinth knows his way round a tune. Featuring a properly classy chorus and a lot of blue aliens in its video for no real reason at all, ‘Last Time’ is more than a little muddled but still comes up trumps. Nevertheless, you do have to wonder if Tinie Tempah’s partner in electro-grime is naturally loaded with premium grade cheddar or if that’s the influence of Syco at work.

With One Direction and The Wanted tearing up the US Billboard charts like there’s no tomorrow, spare a thought for poor JLS. Try as they might to sell the sicky sweet ‘Proud’ with oceans of seriousface and a trio of cameos from Britain’s biggest Olympic hopefuls, the whole track smacks of sentiment by numbers. Three years ago this would have charted in the Top 3, no questions asked.

Yes, ‘Love Me’ has been kicking around for an absolute age, since March last year in fact, but it’s been good to see Stooshe have their day in the sun. The pure filth of the original track [Link: http://www.youclubvideo.com/video/166467/stooshe-feat-suave-debonair-fuck-me], complete with pearl necklace references, has been toned down several notches for radio but importantly, a whole lot of classic girl band sass remains. We truly hope this lot are too good to be one hit wonders.

Made For TV: I Got A Feeling - The Voice

In case you didn't notice the tabloid furore, the BBC introduced a new talent show on Saturday featuring some quite good singers who sang quite well. None of them took part in this ropey version of 'I Gotta Feeling' by the judging panel of Will.i.am, Jessie J, Tom Jones and some bloke from The Script. It's still worth watching, just to see the 'Sex Bomb' star treat young Jessie to a dad dance twirl. Televisual magic if we ever saw it!