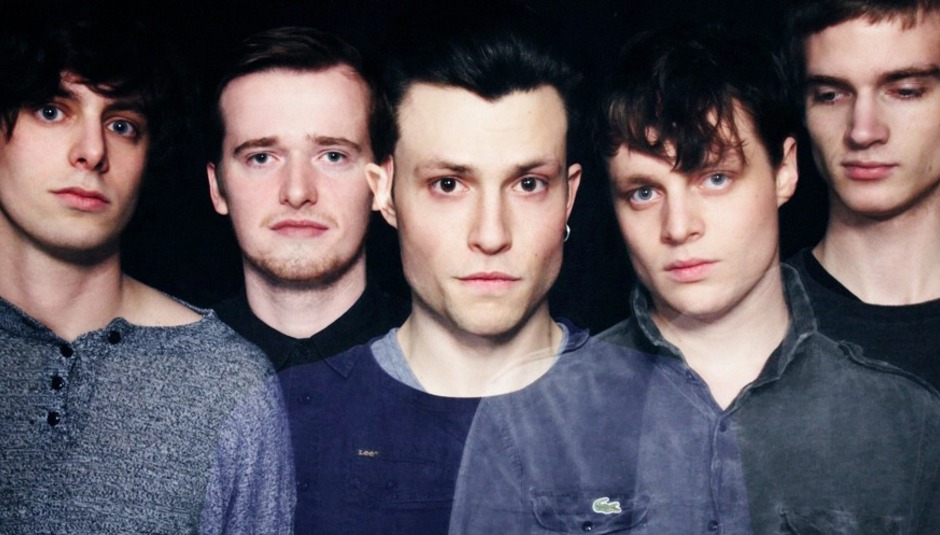 The Maccabees are staring down the barrel of a very good year - everyone says so. By now you will have seen the poster for the record that promises to romp home for them in 2012 - third album, Given to the Wild - setting bus stop hoardings ablaze everywhere. You may also have clocked across the board acclaim: from the NME, who called it the first great album of 2012, to The Times, who waxed lyrically about the Maccabees' 'renaissance album'. It's got to be worth sticking down a tenner with your local turf accountant over the prospect of some Mercury action later in the year, hasn't it?

All of which will likely have struck fear into the heart of the Maccabees fan: soaring sales sometimes come at a price, and commercial success doesn't always translate into a superlative sound. Tense times for those walking that tightrope, looking down that barrel. When I tentatively offer this wisdom to lead singer Orlando Weeks and lead guitarist Felix White, they're not worried - they see it as a chance to soar...

Felix White: For me, success will buy us creative freedom. I don't know why the opposite is the norm. When we made the first album, we had to do certain things to keep ourselves sustained. I'm excited by the idea of being successful enough to control things.

When talking about the Maccabees' third record, the sad and tragic demise of the guitar band, and their comparative success, has often been mentioned: The Maccabees being fingered as the last remaining respectable example of the surge of noughties indie that washed over everything - a high water mark. Again, the boys seem nonplussed:

Orlando Weeks: I hadn't really noticed that times were so hard for guitar bands. I guess we are a guitar band, but I would never think of us in that way; a guitar band is much more straight forward. I don't think this sounds like a guitar record. Maybe it's just because I don't play guitar very well…

Modesty aside, and regardless of their roots, Given to the Wild is definitely different, and certainly not straight forward. The Maccabees are want to put a lot of thought into their opening track, setting out their sonic stall straight away with something sublime (see the two-part melancholic marauding of Colour it In opener, 'Good Old Bill', and the soaring, echoey provocations on Wall of Arms' 'Love You Better'). And you get the first glimpse at their over-all progression as soon as Given to the Wild begins: it takes a lot of confidence to commence with a two-minute long instrumental. When second track, 'Child', does begin and we get into some vocal action, all that instrumentation has been something of a drum roll for - ladies and gentleman, be upstanding please - Orlando Weeks' new singing style. There's much more of it, all swirling around like something winged on the sea wind. Before the chorus kicks in, the frontman repeats 'now it's so vivid' - and it seems an entirely fitting description of the whole sound.

Speaking of that sound, the last time I spoke with The Maccabees was before the release of Wall of Arms, and then the talk was of how Markus Dravs had helped them to bury the spiky guitar sounds of their sophomore record, Colour it In - that he had brought them some of the same magic he'd previously lent to Bjork and Arcade Fire. So has Tim Goldsworthy done what he did for UNKLE, the Rapture and LCD Soundsystem? Some magic lending? Well, no. Magical it may sound, but this is a natural consequence of a third record which they say feels more themselves than ever before - they're not borrowing anything from anyone. And they're almost defensive over where the credit for their latest sound should lay. Understandable, really:

FW: When Tim came on board, we had a lot of ideas, a lot already on the table. Tim saw something in it and got involved. We messed around with some of their equipment, some of it we used, some we didn't. I would only call that Tim Goldsworthy moment a session, really. We took the record back and did a lot of production ourselves.

You get the feeling that having somewhere to call home has helped with creating something to call their own: they recorded the latest at their new base, an old south London studio (which formerly belonged to Jesus and Mary Chain, though they only discovered this later, by accident) that had fallen into disrepair and needed some love. Important to have a place to call your own when you're engaged in the pursuit of perfection (and perhaps ever-so-slightly nervous about releasing your new brood of songs into the world to fend for themselves):

OW: It's been crucial, really crucial. Yesterday we went in and put four new lightbulbs in, and I'd forgotten how beautiful it is. It started feeling a bit unloved because we were in and out of it; we spruced it yesterday and gave it a bit of love and attention. You just want it to feel comfortable, because recording is an incredibly uncomfortable experience. You're committing something to record: all of these ideas you've been having, this is the definitive statement about them. I don't want to be in a difficult place having a difficult time.

Homely it may be, but they purposely didn't spend too much time in it. Rather than, as with previous records, certain band members taking the lead on writing, and them all bashing it out in the studio, this time they each retired to their own homes to create individually, building up the record bit by bit. I offer some pseudo-statistical analysis, telling them that couples who sleep in separate beds are proven to be the ones that stay together the longest:

FW: Yeah, we slept in separate beds for a while, and we're better than ever now. That's the perfect metaphor for it.

OW: It just became an exciting thing. You'd make something you were really proud of and you'd either send it to them or go round someone's flat and see where it went for a day. And it became like an event, rather than going into a studio day after day and maybe coming out at the end of that 7 or 8 or 9 hours and thinking: nothing's happened. For three or four months I had the nicest time. It removed so much of that claustrophobia of the responsibility of making a record. And everyone, I think, felt that.

This healthy distance gave them the mental breathing space to be even more mindful about the music, which they say accounts for the intricacies of the record. A cinematic, layered LP, that feels lovingly put together.

FW: It had everything to do with how this record sounds. As we were writing, we were recording, so we constantly had perspective. Normally when you write a record you write it for 18 months, record it in a month, and that will be your record. This way we were slowly putting it together, so you can see what the songs are missing, what the record's missing . That's how I think there's more adventurous production; there's things on this records we haven't done before, more depth to it. It's everything, the process is everything.

Where previously their records have essentially been them playing live, recorded, Orlando tell us that Given to the Wild is the first time they've really written a record (and are now figuring out how to play it live). Do right by the process, and the process will do right by you: It's more patient than anything we've done in the past; it's more confident in the song writing.

From their always interesting album art-work to brilliantly unlikely collaborations (Dodsworth Colliery Band being perhaps the most unlikely) to that cheese video, The Maccabees ooze the DIY, art-school ethic. That burning savannah you'll have seen on bus stop hoardings was the result of a speculative email to artist Andy Goldsworthy (aptly known for his 'collaborations with nature'), someone whose work they all admired. And that they are so fastidious about all aspects of what they put forth is further testament to that respect for the process.

So, sure, it's slightly softer, it may even sound a little bit Coldplay in places, but you definitely don't get the impression they've written a record to sell-out the 02 Arena. Apart from anything, they retain some of the shyness about what they've created, the modesty, that, ironically, usually signals at least a little bit of belief on the part of the creators. They don't see this record as something to retire on, and they don't like being described as entering their prime - that leaves them with no-where to go:

OW: That's what I think: the next thing we do will be the best thing we do. If it's not, then what's the point? As soon as you stop making things…it's weird, the making is the best bit, and then the tricky bit is everything else. Being frustrated because you can't figure out how to make something work is a nice frustration to have. It's just the making that's the fun bit…

A massive year it may be for the Maccabees, but it will be a massive year of their own making. And who can argue with that?