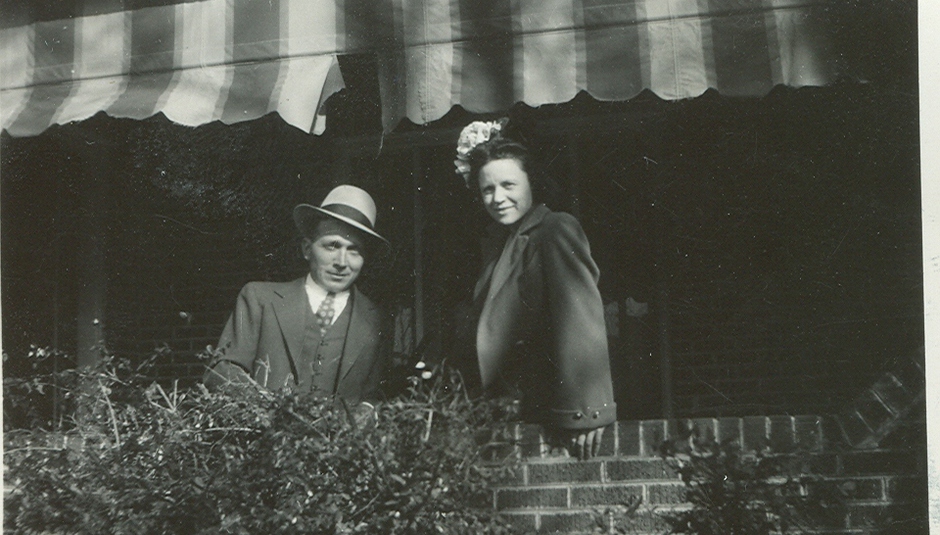 Ahead of her London show next week at the beautiful St Giles Church (17th November), My Brightest Diamond shares two exclusive demos tracks inspired by her grandparents' love letters...

"My grandmother, named after her uncle Eddie, turned 99 years old in December of 2009. That Christmas, for the first time ever, she decided to give our family the letters that my grandfather had written to her during their brief courtship and early marriage. As long as I could remember, my grandparents had always slept in separate beds, because they each snored so loudly that they would wake the other up. Grandpa used to make fun of how rotund my grandmother was, calling her “sweet one”. She did eat ice cream after nearly every meal! Their marriage was always full of gentle teasing and faithfulness, but it never seemed to me to be particularly romantic. When I started to read the letters, I began to see a different side of their relationship and understand further why Grandma’s eyes twinkled whenever she talked about Grandpa.

Eddie never finished 7th grade, because she needed to work. I don’t know what her first job was, but I know that at one point she washed dishes for ten cents an hour. Whenever we asked about her childhood, all she would say was just, “we were so poor.” She didn’t want to remember the details. She had three siblings die in childbirth. Her mother died of cancer when Eddie was just 23. While her older sisters married as early as possible to escape the situation, Eddie spent ten years taking care of her father and three younger brothers, one of whom had cerebral palsy. Finally she moved away from home, but by then, she was considered an “old maid”. It was January of 1948 when she received his first letter. Charles was a thirty-eight year old bachelor and she was thirty-seven. Charles and Eddie had a mutual friend named Ms. Lester, who he called “Grandma” (just to make this story confusing). The first letter we have from Charles is actually the letter he wrote to Ms. Lester, as he gathered his courage to write to Eddie for the first time. It is such honest writing, filled with his wry humor, poor grammar and southern expressions of the dustbowl era that when I went to create a song cycle based on these letters, I found myself using the first letters contents for three songs.

Charles got on a bus and met Eddie on a Friday. When he arrived they stood at the bus depot and he bought her a gum ball from a machine. They went to a few church meetings and met with "Grandma". By Sunday before he was about to board his bus, he proposed simply, "Well, do you think you could have me?" to which she replied, "Yes I could." The first letter we have after he arrived at home is full of elation and high spirits. The later letters reveal that Charles longed to be with Eddie but couldn't seem to ever have enough money. It's humbling to see how little they actually had and how hard life was just to survive. However, by April of that same year, Charles came down to Texas from southern Kansas and married Eddie in a very small ceremony with the judge. Two years later, when they were thirty nine, Eddie had twin girls by c-section. The final letter was written not long after their birth, where Charles was on a job laying pipeline which he compared to Joseph making a lonesome trip down to Egypt. "Keep cheered up mama. Sure was hard for me to leave. Stay in bed and take good care of yourself. Love to all my girls." he writes. While the song cycle "Letters from Charles" was not a musical success in my opinion - the idea of setting letters left many dramatic weaknesses. I was very strictly adhering to the text, so the song texts left gaping holes in the narrative, but I wrote the song cycle for the chamber group yMusic and without that experience of working for three weeks at 14 or 15 hours a day writing that music, I would not have gained the vocabulary or the experience in arranging for this group. "Letters" greatly informed All Things Will Unwind, if only it told me what I didn't want to do again."

Here are some electronic demos from "Letters from Charles", a classical-ish song cycle that I composed in March 2009 for the chamber ensemble ymusic:

The Rings (demo) by My Brightest Diamond by drownedinsound

My Brightest Diamond will perform her new album All Things Will Unwind in its entirety with a chamber ensemble and band on the following dates: