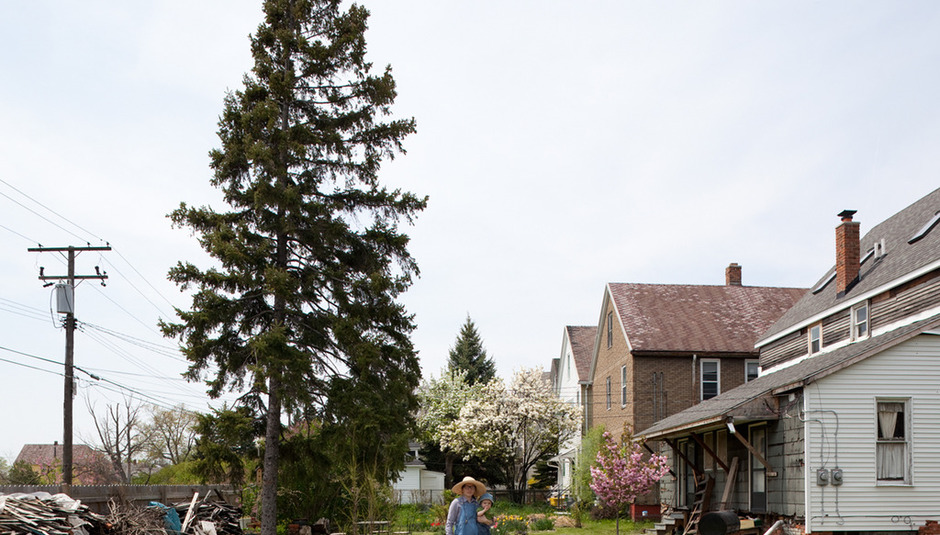 As part of her site takeover to celebrate the release of new album All Things Will Unwind, My Brightest Diamond (aka Shara Worden) talks about her Detroit Garden.

After nine years in Brooklyn, New York, I was reaching a limit. Yes, there was the obvious limit of space in my apartment. I'd recorded two albums in that place and those were good times. I knew how to unplug the refrigerator when I was recording.

But I needed to change my environment, get a new perspective, write a new record in a different landscape. I thought about moving to Berlin since my drummer Earl Harvin lives there. Berlin seemed to offer a sustainable lifestyle, having cheap rent and offering space, but then there was that whole visa thing which seemed like a hassle. It was election year - November 4th, 2008, and we were on tour passing through the east side of Detroit, in a neighborhood about 10 minutes from downtown. As we danced to Obama's election, celebration gunshots rang out across the neighborhood. The next morning my Detroit friend said to me, "I want to show you your house." We walked five doors down the block and entered this big, old abandoned house. When I walked inside, it instantly felt like I could see us living there. I could imagine our paintings hanging on the wall, could see my studio, could see my life there. Then she told us the price; well, let's just say, it was cheap. Very affordable even for a musician (that's saying something!). Sure it needed to be completely renovated, but I figured having my friend down the block, having peach trees in the orchard out back, having space, having a garden, it would be worth the work.

My New York book club had read "The Omnivores Dilemma" and "Animal Vegetable Miracle"(link) which challenged my ideas about food production and consumption. I longed to actually start growing my own vegetables. That first spring in Detroit, I planted cherry trees and start carving out garden beds, both flower and vegetable. We weren't able to live in our "new" house for over a year and half because of the renovations, but the garden was growing steadily all along. My neighbor Molly, who manages the community garden across the street, lent me a book called "The Good Life", a story of New Yorker's who had left the city and started farming on 60 acres in Vermont. It was inspiring to read how they built their community, gathering around the fireplace, darning socks and reading poetry on Sunday nights. I haven't exactly taken up darning socks, but the idea of community has become real to me in a new way, as I've seen people here barter, give to one another generously, cook for each other and hang out together on front porches counting hawks. Growing food and creating art seem to go hand in hand in Detroit. Artists like Blake Carroll and KT Andresky host events at a gallery space called the Yes Farm ("gallery" is a generous term, because I think the word implies that there is actually electricity and a functional toilet - which there is not). KT's tomato trellising often looks more like a sculpture than a functional cage for flimsy tomato plants. Neighbor Paul Weertz was teaching science at a high school for pregnant and parenting teens by using farming to teach the girls about anatomy, nurturing, and about food chains. Paul grew alfalfa on empty lots around town, where houses used to be and he used the hay bales to feed the animals at the "the school farm". Another neighbor, Kinga Kemp, cares for the beehives on the block, and makes lip balms, creams and tinctures from their labor. She has her own screen printing business too. Carolyn Leadley of Rising Pheasant Farms, another neighbor, makes her living by growing sunflower sprouts, choosing to live without a car and farming organically. When my inevitable rookie questions arise like, "Is that a weed or a flower?" , my expert neighbors are quick to come over and point out ragweed or goldenrod or vine weed. (Yes, that first summer I trellised vine weed, because I thought it was a bean plant.)

There's another side to the Detroit coin. There's a side of life here that wrings your heart out, that makes you realize that you had so much privilege in your life of which you were completely unaware. Most of the folks in my larger neighborhood seem to have the cards stacked against them from the beginning. These are poor folks. Poor in education, poor in information, poor in having people believe in them. Things are good if the electricity is on. The Department of Labor indicated that the unemployment rate in Detroit in August 2011 was 14.4%. There is a time when the answer is hard work, but there are also situations when an entire culture, the environment itself, has so many road blocks, that it's really really hard to drive yourself out of the danger zone. There is no local school here, neither a school bus to pick up kids. I asked one of the kids what time he gets up to get himself to school on the city bus, "5 o'clock in the morning", he said. Some kids sell drugs just to pay their mama's electricity bill or buy dinner (of chips and pop) at the only store in walking distance- the liquor store. My neighbor John walks several miles to the closest grocery store and tries to sell imitation perfume on a table out front. When a big wind storm came through in August, the tree in front of his house fell onto his porch roof. "Story of my life," he said.

Is Detroit the next Berlin? Naw, I don't think so.. Detroit is it's own place, with it's own history. It is magical and it is wild. There's a sense here, that Detroit has lived through a nightmare and is continuing to pick up the pieces and build for a better future. There are so many racial wounds here, but I see prejudice increasing all over the world. We fear the unknown. As economic challenges are increasing, we cling even more to the familiar in the hopes that safety & stability will be found. The divide between the "haves" and the "have nots" widens. But acts of prejudice result in hurt, anger and violence, because they go against what we all seem to know deep down inside of us, and that is that we share our humanity. We are created equal. To be treated in a way that is contrary to that fundamental truth is a violation. If you haven't often been on the receiving end of prejudice, it's sometimes hard to understand that experience of life. But living here in Detroit, I have had my eyes opened to a different reality. It has been a humbling process indeed. I don't have big political answers. Healing starts with initiating conversations with neighbors, with listening, with feeding a kid a bowl of soup after school, with patience, with kind words. I do know that Detroit's a struggle worthy of the work.

All Things Will Unwind is out now on Asthmatic Kitty.