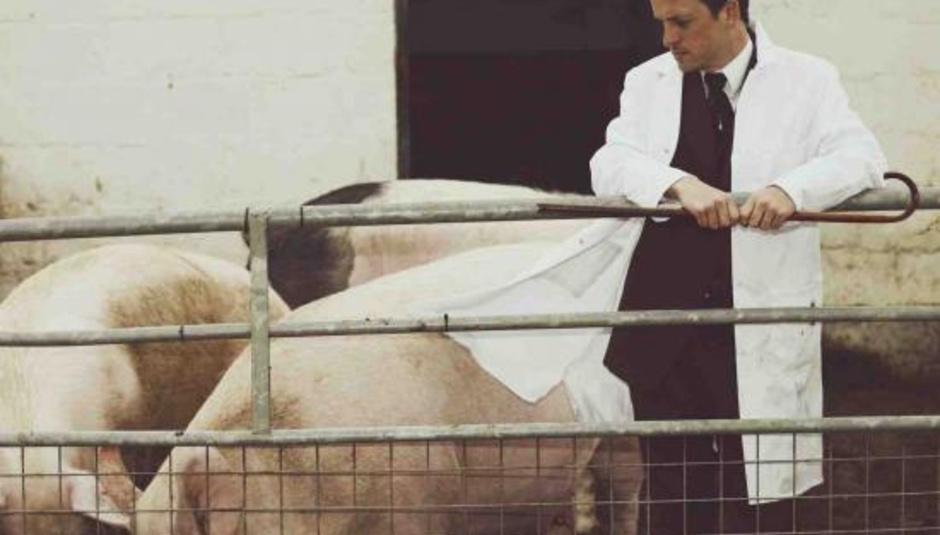 ‘The pig,’ murmurs Matthew Herbert, avant-electronic pioneer hero, sitting on his hands, ‘is a metaphor. For the gap between user and producer, what we do and its impact, the consequences of our actions. The way we treat animals is arguably the worst expression of that.’

The pig as metaphor: familiar cultural territory for anybody who had fairytales about three little pigs or the prodigal son (who ends up mucking out a sty, no fun for a Jew) thrown at them when they were little. Or watched Spirited Away when they were a bit bigger. Or had Animal Farm or Lord of the Flies spoonfed to them at school.

Even pig killing, the thing that got Herbert into trouble with PETA (won’t go into it here, just a bunch of knee-jerk nonsense about ‘hurting animals to attract attention’) comes laden with artistic significance. The slaughterhouse provides Roald Dahl with a mollycoddling-criticising sting in the tail in Pig, and China Mieville with a symbol of left wing stoicism in Perdido Street Station, not to mention Nick Cave with the ‘abattoir blues / Right down to my shoes.’ And the DIY slaughter of a pig in Jude the Obscure is the straw that breaks the back of the protagonist’s marriage to the earthy, vulgar Arabella, who is determined that the creature dies slowly for the sake of its meat.

Herbert and a sickeningly handsome food writer called Tristram Stuart (best known for once encouraging Telegraph readers to, ‘if you love animals, shoot your dog’) touch upon similar ground to Thomas Hardy with their pre-show discussion, which is a surreal pleasure to witness:

Stuart: You are still allowed to kill your own pig at home, but you have to eat the entire pig yourself. I do.
Herbert: How do you kill your pigs?
Stuart: I put a bullet in their head before they know I’m there, so that they don’t get scared.
Herbert: Yeah, it’s funny, I somehow feel like if I shot you in your sleep, you’d taste nicer.

Stuart: So, what about fish?
Herbert: Oh, fish should be rationed, obviously.

Herbert’s views on food range from the thoughtful (‘strange thing is, it’s nicer for battery hens to die, easier – organic hens hate dying’) to the self-consciously silly (‘when you use anti-bacterial handwash, you’re killing animals’). From the insightfully anti-capitalistic (he points out that large swathes of the organic and whole foods industry in the USA is owned by the Koch brothers, who also fund the Tea Party) to the rather unspecifically revolutionary (we need ‘massive change’, capitalism is an ‘evil brilliant beast’ etc.). Crucially, he has an artist’s eye for engaging detail, even when concerning himself with the macrocosmic. ‘Why are there adverts for chips?’ he asks, when questioned about food advertising. ‘Everybody already likes chips, right?’

This nuanced and, perhaps, rather whimsical and inconsistent approach to the politics of food, offers a useful introduction to his latest project, One Pig, an album-length musical narrative about the life-cycle of a pig, from birth to death and beyond – which has been wildly misunderstood since Herbert first started talking about the project. It wasn’t just PETA finding out that he wanted to record the sound of pigs being killed for a track for the record, and assuming (as PETA is wont to do) that he was therefore some kind of horrid farm animal-hating voyeur fuck. There was also the widespread broadsheet- and zine-led tide of assumption that One Pig would be an acutely ‘political’ piece, like 2008’s There’s Me and There’s You, Herbert’s take on the Israel/Palestine conflict.

What’s clear, upon entering the studio at the Royal Opera House where One Pig is premiering as part of Mike Figgis’ Ignite Festival, is that Herbert’s latest work is more descriptive than it is polemical. At the centre of the stage is a wire-wrapped pen, ringed with bales of hay and white farmers’ coats. At the back is a long table, half arranged for cooking, half for eating. A man walks on and starts scrunching straw into a microphone, quickly followed by another man who stretches it into an electronic loop.

What follows is a sequence of tentatively descriptive tracks which veer from the familiar to the absurd, the chaotic to the crisp, the abstract to the painfully specific (the sound of a hacksaw groaning its way through a pig bone hung in my head for days) without ever losing sight of its overarching aesthetic. Namely, an elegantly affecting calm neutrality, neatly sidestepping emotional manipulation and a straightforward ‘message’ with every beat.

At gloriously flailing odds with this is the centrepiece of the One Pig live experience: a man representing Herbert’s pig, playing his pen. Turns out the wired square is, in fact, a ‘sty harp’, each of its cables rigged to a different sample, porcine sound effect, harmonic theme and so forth. Basically, the pig makes his home sing with sequences of exploratory, aleatoric grabs that are woven, in real-time, into coherent shapes by men with laptops and electronic boxes. A percussionist with a drum machine, and an excellent pianist, try to keep up.

The performative element is, for the most part, broadly sketched – the pig wears a farmer’s coat branded Sep, Oct, Nov etc. for each month of its life, before the rest of the band enter the sty and rip off his white coat revealing a red one (and savagely pull on his sty-strings) as pig meets maker. If this suggests that the music will also have straightforward symbolic resonances, October quickly rejects this notion; leitmotifs and Prokofieffian two-dimensionality have no place in Herbert’s project. And why should they if one believes, as Herbert makes it clear he does during the pre-show, that pigs are not ‘characters’ or inferior beasts: they’re animals much better at being animals than we are.

So whilst September is pastorally familiar, bright with new life, October is complex and brittle, a scatter of asymmetrical rhythms reminiscent of the tension-building soundtracks of seventies kung-fu movies. It’s clearly not describing, I don’t know, a pig beginning to explore its surroundings, or scurrying into conflict its brothers; Herbert is focussing on, and attempting to translate for an audience that might not otherwise be interested, the lively, complex textures and pulse of an animal’s life, the animal they will eventually eat.

They will eat. Shortly after Herbert’s pig has been stuck, a chef walks onto the stage and starts to cook behind the band, with real heat and real pork. The pig, now very much a man, places microphones over the bubbles of cooking fat, which are looped into sonic consistencies. The percussionist offers a rattled counterpoint to the sound of a wooden spoon hitting a pan. As the music somehow meshes, with a kind of bizarre coherence, into a bona fide pumper, part-Battles, part-spacey wah-wah wig-out, a fan wafts the smell of cooking meat into the audience’s clothes and hair.

And then chef brings food, delicious edible food, to the dining table, and the musicians leave their instruments and stand in front of their plates, reverent. All except the pianist, who begins to play a trite little melody. Herbert himself, largely anonymous in his own band for the preceding hour, starts to sing gently:

"A simple life is all we need / Magnify, dignify each day"

The only other line I can remember is the last, sung by Herbert to his pig, delicately encapsulating the moral of a story that has sidestepped Orwellian allegory, cinematic over-significance and an overbearing point-of-view. A story that has been about education and humanity, rather than vegetarianism or capitalism or pointing an indignant finger at murderous human greed.

"Let you occupy my thoughts instead."