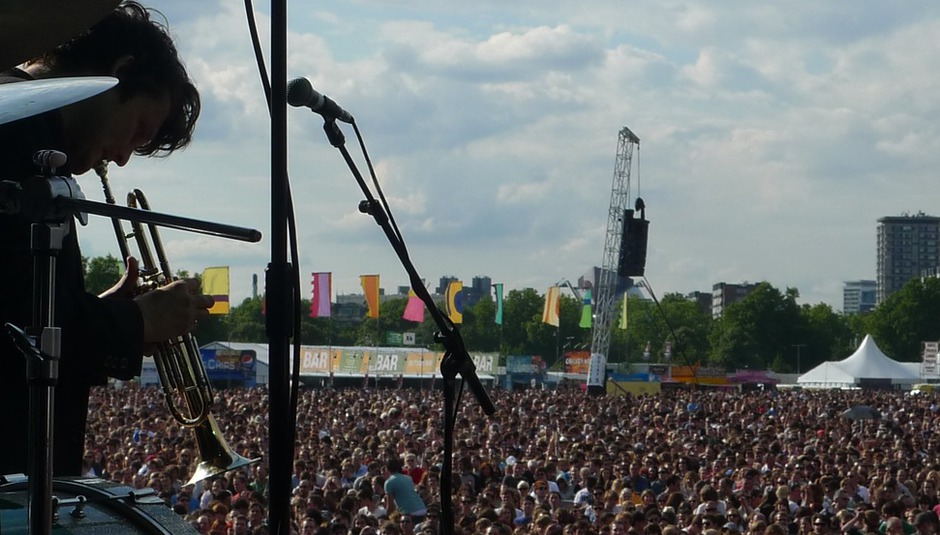 As part of today's site takeover, Beirut's Kelly Pratt and Paul Collins provide us with an glimpse into their life on the road over the past few months...

Kelly Pratt: We get to play a show with our good friends Arcade Fire. Also on the bill is Mumford and Sons and Owen Pallett. With a new band backing him, this is the best I've heard Owen play. We play to probably our largest crowd ever, around 50,000 people. It goes wonderfully and then we drink way too many Bourbon ginger ales. Arcade Fire kills it, the band seems to be having a wonderful time, and Win is chattier with the crowd than I have ever seen him before. I believe it's their biggest standalone show ever as well. We go back to our hotel, then hit a nearby club called The Rock with one of Mark's beautiful friends (he has one in every city). It is a shithole, but the only place open. We end up in the smoking area, which is just a parking garage around the side, to get out of the ear-splitting techno. London can be a bleak place after 11pm...

On the day off between shows we have an unforseen delay and have to stop at a filling station for 9 hours so the drivers can rest. We see a small village a couple miles away and decide to hike there through a cornfield. It ends up being an amazing little town called Illzach in the Alsace region of France. There are multiple little wine tasting spots which we hit wi

Kelly: The National and Warpaint play before us. We are buddies with the National (Lanz plays with them when he's not with us), so it's always fun to hear and hang out with them. The big surprise for me is Warpaint. I haven't really heard them before and they kind of blow me away. We play in a tent, which is probably our best possible setting at a festival. The crowd really brings the energy and we have a wonderful time. Lol gives us the best stage sound I ever remember having with Beirut. We play our first encore of the tour, then hit the bus. Kelly: Ferrara is a beautiful little town in Northern Italy. The food really kicks it up a notch after the first few grim days. Paul's parents and my parents are there on vacation which makes it even nicer. Our show is right in the middle of the town square next to an old castle with a moat. It's our first show ever in Italy and people are pretty pumped. We play as the sun is going down, opening for the National. Zach, Lanz and I sit in on a few tunes with them, we all drink a bunch of whiskey backstage, then hit the bus for Serbia. Kelly: Our first time in Serbia. We have a day off between shows and find an awesome bar blaring balkan brass music. We meet up with Tim and Richie from Arcade Fire and drink our weight in beer. Near the end of the night a band starts playing Serbian songs and all the drunk patrons sing along. The festival the following day is one of the worst organized we've ever played, but we get to see Arcade Fire bring it again. We share some drinks with them after their set and then head to our stage where we play at 1:45am. We've all had a few too many by this point, but the show goes well regardless. A bit of a throwback to the olden days where we would all get faced before every show. Near the end we play Ederlezi, a Balkan folk song everyone knows, and they all sing with us. My mic stand breaks during the encore so I grab my mic and run out into the crowd to blast some trumpet. Kelly: Another festival, sometimes they all seem to be the same. A big field in the middle of nowhere with an assload of bands none of us really care about. Festivals are amazing to try and reach new fans, however. There are always a ton of people who have never heard or even heard of us. It's wonderful to hear from someone after the show that they had never heard of us and thought we were great. We do get to see Portishead here though, and they destroy. Beth Gibbons' voice is incredible, and sounds just as good live as it does on record. Perrin and I watch side stage and slam a few beers before we head back to the bus.

Kelly: Arles is extremely picturesque, there are two amphitheaters that date from the first century AD. Again, we arrive a day early and Lanz and I decide to take a walk. We happen upon a raging brass band led by about 20 crazy double reeded instruments. They are basically part of the oboe family but sound way more screechy and nasty. We follow them around town as they play in a few different locations. Later I talk to the maker of them and he agrees to make me one and ship it back to New York. Our show the following night is in one of the old amphitheaters. It starts raining about halfway through and we have to leave the stage for a moment. This adds a bit of energy to the crowd so when we come back they are ready to rage. We finish strong then head to the bus for a long drive. Kelly: I'm a little tired (read: hungover) today, so I stay back and watch Game of Thrones at the festival while everyone else goes to the beach. An awesome thing about touring is that everyone seems to be watching or has watched the same shows while on the road. Paul and Nick are on season 5 of The Wire and it's hard for us not to give away anything. I check out a bit of The Walkmen, who sound very much on point. For our set, we have a huge crowd, probably the second biggest of the tour after Hyde Park. We have no problem getting people to sing along, in fact they sometimes drown out the horns, which only happens in Portugal. After our show we rush over to watch Lykke Li from side stage. The show kind of opens my eyes a bit about creativity outside of the music aspect of a stage show. She has these huge black cloth banners hanging from the lighting rig that writhe around the stage, wrapping around the musicians and the instruments. The outfits are all black, and the lights and smoke machines all come together with the music to make it an all-around awesome experience. Kelly: We arrive a day early and some of us stick around to watch the festival. I get to see and play some songs with my great buddies Herman Dune. A little later in the night we see a James Murphy DJ set. James, Juan Maclean and I have a glass of champagne on stage during the set. It's always nice to see friendly faces when you are so far away from home. Our show the next night is great, by this point in the tour we are usually on top of it musically. Not to mention the fact that our audiences in Spain and Portugal always seem to lose their minds when we play. This is pretty unusual for us coming from New York, where everyone is too cool for school. After the set we grab some beers, sit down in the VIP section, and watch all the beautiful women walk by.

Kelly: We play as part of a summer-long festival called Les Nuits de Fourvières. Lanz and I have played here before (with The National and Arcade Fire respectively) so we know what to expect. The venue is an amazing old amphitheater that is extremely steep. Mark has to mix from the top and has a little trouble, but us on stage are always blissfully ignorant about front of house sound. I picked up a rugby ball in Spain so we toss it around after the show, American-style, until we get on the bus. Kelly: Last show of the tour, and most of us are pretty much ready to go home. We arrive a day early, and a few of us head to the festie to watch the National again. Lanz plays the whole set, and Zach and I sit in on a couple tunes. This is probably the best I have ever heard The National play, though maybe all the wine we drank has a little something to do with it. Again we are in a tent, and I had noticed the previous night that the crowd was brimming with energy. The same holds true for our show and we play one of our best of the tour. Near the end of the set some girl throws her bra at me. It kind of sticks on my finger and I have to shake my hands a couple of times to get it off. Definitely a first for me (though Lanz got some panties thrown at him in New Orleans). After the show we meet some lovely Swiss people, and head back to the bus for our morning flight back to the states. 7 days off then we hit the US and Canada!

Paul: The festival was great. Between Beak>, Anika, and Portishead, it is safe to say that it was “Portishead Day”. Luckily we managed to hold our own. The crowd was one of the more excitable of tour.If their physical response wasn’t enough to show this, a brassiere was tossed onto the stage. Not since Mexico has a bra been given to us. It is such a rare treat. Kelly received the offering. A fitting end to a Euro tour.