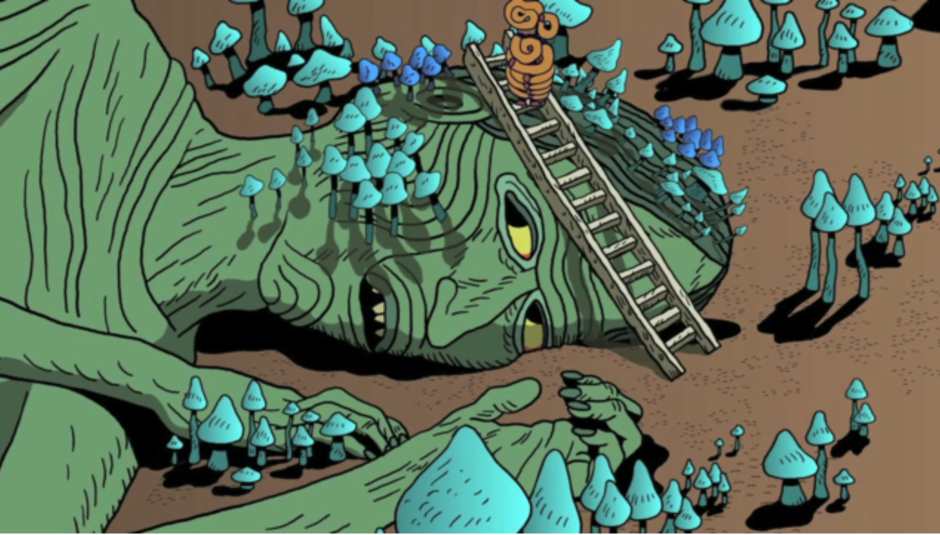 If you’re still with me, you won’t have been surprised to read that David Cameron and the “Mother’s Union” decided to commission a “review” into whether or not music videos should carry age ratings and certain videos be “limited”.

There are a number of things to consider here. Rhianna’s video for “Man Down” is a bit risqué and maybe a bit wrong, but is it worse than walking past a group of horrid teenagers in town on a Saturday, piped up on red bull and talking about what teacher they think is the biggest pervert?

I don’t know whether it’s right or wrong to have music video un-censored, but all I know is that the debate is one that’s been going for ages and I find it really boring.

Really, really boring. Controversy should be fun. The “are you a good enough parent” debate is not fun.

That’s why I’ve picked not one, but MANY excellent sci-fi videos that have appeared in the last couple of months for this roundup. Space is fun. I’ve also picked a remix of one of the space video songs because remixes are fun and animation is fun. I’ve even put in some controversial ones because controversy can be fun (Especially in these days of interweb message boards - plz leave messages). Also, some funny ones because funny is fun.

I wish I was this fun.

Director: Nick Davidge
Yeah sci-fi. I think this lovely. Although it looks a lot like what things did in this film. Maybe that’s the idea. Although that film had the worst soundtrack ever, and this one is really good. Are astronauts allowed beards?

Director: Double Zero
Munk. They’re Italian, they’re German. They have a really odd video that’ll make you laugh, but then feel guilty about it because they just bottled that man and left him and I know he was a bad person, but they’re bad people too. You know?

Director: Allen Cordell
You know that scene in John Carpenter’s “The Thing” where he goes to defibrillate that man, but that man turns out to be “The Thing” and chops his hands off? This contains a similar scene. This isn’t quite up there with the greats of crazy, but might at least give you nightmares about evil purple puppets.

Director: Matt Devine (The Glue Society)
Hoodies. They’re bad people aren’t they? They must be. It’s either that or their PR is rubbish. Apparently this video has been accused of classism, but I’ll let you decide whether that’s founded or not. There’s a fair bit of blood vomiting, so if you are at work, or an impressionable child, then don’t watch.

Director: CANADA
I’ve put this in because my housemate and a couple of other people I know really like it. I’m not convinced, but only on the grounds that I think it’s a carbon copy of CANADA’s equally quirky video for El Guincho’s Bombay . I really like Battles though, even without that guy that did all the ace wobble voice thing.

Director: Edouard Salier
Are they Buffalo or Bison? I don’t know. Let me know via twitter @samueljameshill. The CGI is pretty impressive, but what’s actually happening makes no sense. It all looks great though, but if you’re anything like me you get flashbacks to Simba’s dad biting the dust in The Lion King.

Director: Tom Haines
Oh Tories. Why did God make you so easy to mock? This is like companion video to Son of Kick’s hoodie bass torture, where some posh kids are horrible. Much like real life (shakes fist).

Director: David Wilson
I featured David Wilson’s puppet suicide video for Keaton Henson last time, but thought I’d include this one because it shows a much brighter side to his work. It’s super summery, and worth it because Olugbenga is the coolest bass player ever. If you don’t believe me, skip to 2:49 or 3:42.

Director: Toben Seymour
Yes, it is Jon Hamm. Yes, he is Don from Mad Men. That’s enough to sell a video to me, but it also has a blue puppet in it. Like a cute version of that puppet from the Gentleman Driver’s video. Released exclusively through Funny or Die, it’s quite endearing, but I always feel like our Don’s going to eat our furry blue friend. The full version you can see here, but the short version is here, embed-stylee:

Director: Young Replicant
More sci-fi. This one is really, really good. It looks beautiful. Directors Alex Takacs and Joe Nankin (one half of studio, Young Replicant) have done a top job. The costumes and effects are great, and it’s a video you feel really has a proper plot, like an ace 2001 meets Planet of the Apes meets 90’s TV show Sliders. Plus, the lead man has a really nice face.

Director: Cyriak Harris
THE CURVE BALL. Oh no he didn’t? This video is a remix OF THE SONG ABOVE! A little less sci-fi than before, animation mentaloid Cyriak Harris goes all cubist on us. Stick with it, and you’ll feel travel sick…in a good way. Sticking with the theme, it’s really fun.

And also watch this:

Directors: Alex Bergman & Maxim Bohichik (BBGUN)
Cool Kids are excellent and BBGUN’s video is funny. Like ‘laugh-out-loud’ funny and not just ‘some-people-say-it’s-funny-and-I-can-see-its-merits-but-it-hasn’t-tickled-me’ funny. I like the cameraman and hope that all camera-persons are like that.

Director: Elliot Dear
The collaboration between King Creosote and electronics maestro Jon Hopkins was odd but brilliant. However, combining it with Elliot Dear’s surreal, comforting and delicate animation is an absolute stroke of genius. According to his Vimeo, Elliot rotoscoped the whole thing, and spent less than £200 in total. Outstanding.

Directors: Us
I really like Us. They’ve made some ace stuff for some people recently, including a proper good Dels promo for “Shapeshift”. This Wiley video is great, and seems to fit really well into Wiley going against the grain – especially when you usually shies away from the camera lens. It’s witty, funny and watchable.

3) Is Tropical – The Greeks (Kitsune)

Director: MegaForce
Here’s another controversial one. Kids killing each other with toy guns and cartoon gore. Is this video really fun, or is kids brewing up Cocaine a little bit too far? Either way, there’s no doubt that MegaForce have done a great job with the visuals because it looks ace...or horrific depending on what line we’re taking here. Not sure about Is Tropical’s music, but they’ve managed to create a stir with this video.

IS TROPICAL - THE GREEKS (official music video) from EL NINO on Vimeo.

Director: DANIELS
I haven’t met anyone yet who doesn’t think this video is anything short of amazing. It’s an incredible achievement for a promo. In my mind the holy grail of music video is to have something that not only accompanies the song well, but represents something entirely new from within. There’s a whole new palette of emotions on show here from the video alone. Well done Daniel Scheinert and Daniel Kwan. Well done DANIELS.

In his other life Sam Hill watches a lot of videos from new, emerging and unsigned bands, artists and directors. If you feel you are one of these you can submit a video to the BBC Music Video Festival 2011 and maybe have your name (and video) in lights!