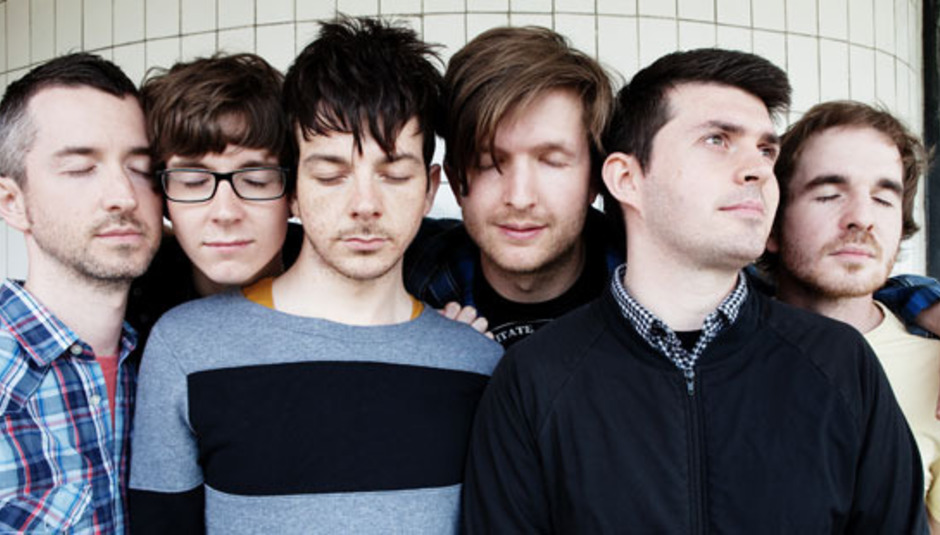 With debut Hey Everyone! drawing comparisons to the likes of Los Campesinos! and Johnny Foreigner, it’s safe to say that Glaswegians Dananananakroyd have had a brilliant couple of years. With the release of second album, There is a Way, and a stack of live dates, the year looks just as bright for the energetic sextet.

So explain There is a Way. What is there a way to exactly?

Paul Carlin: Yes, there is meaning to it and making an album title is not easy, especially not in this band. There is a deliberate ambiguity to this record.

Ross Robinson also produced two of your favourite albums by the Blood Brothers and At the Drive In. When he worked with you on There Is A Way, did he add to the meaning?

John Baillie Junior: It’s quite atmospheric the way he works. He strips everything away with everyone he works with and all his albums that are famous sound really different. He gets performances out of people, as if it were a fire. He’s not famous for being a great engineer but he’s a genius and he engineered this and it sounds quite amazing.

DR: As soon as he’s done with one record, he’s onto the next. If he repeats himself it’s not on purpose but it’s inevitable that it may rub off.

Calum Gunn: When you’re playing, you forget you’re doing stuff. With Ross, we learnt that once you’ve been through that, you can realise what you need to do the next time round.

PCl: He just wanted fire, fire and fire. It’s the word he used all the time. The Ross Robinson fire Is what we called it and he wanted to get every ounce of emotion and energy.

JBJ: The tracklisting’s never really matter and you can listen to it as a whole. I still suggest you listen to it from the start but in terms of where you put the singles, it doesn’t really matter. It’s how the album flows as a piece. Each song is standalone enough.

PC: Every song’s got a different personality but as a whole, we’ve put a lot of thought into it.

DR: It’s about pushing ourselves to the limit.

Speaking about pushing yourselves to the limit, what was the idea behind being guinea pigs and wearing tracksuits in the video to ‘Muscle Memory’?

JBJ: At first we wanted to be like the Royal Tenenbaums but we thought it’d be really lame as we’d all kind of looked like we were chavvy power rangers.

Ryan McGinnes: The idea was testing our muscle memory.

CG: The pink one was the girl right?

PC: The pink one was a tranny.

RM: There was the chick with the tigra. She was the bitch power ranger.

Let’s get back to the album. Have you taken on any criticisms of the album for There is a Way?

JBJ: Certainly not from certain journalists. Not a word.

PC: Once you worry about what everyone says, you’re toast.

DR: If they made the album differently and did it their way, it would not have been great.

JBJ: Those comments are out dated pieces of observation.

RM: We didn’t look at it typically.

DR: We’ll leave it to the journalists.

CG: Quite a lot of the album was written with certain journalists in mind. They got an advanced copy before anyone else.

RM: There is a way and that way was referring to those certain journalists.

What happened to the wall of hugs? Some have said they missed being caressed by the sweaty bosom of an obese manchild which was the only means of contact they had in a while?

JBJ: You can do that yourself still.

PC: You can pay someone to do it yourself. If it happens, it happens.

RM: We sometimes use it as a diffusion tool if the crowd are really moshy.It became a thing everyone talked about but if we get bored of it, it had to go.

PC: People have to understand that the majority want to have a good time and enjoy the band and there’s always some idiot ruining it.

DR: We want girls to come see us play and they don’t see us play when there are guys beating each other up.

JBJ: The moshing thing is especially annoying. When you’re playing you see it from a different point of view. You see five people scrunched and it’s just total out dated bullshit. We stopped our set last night because of it.

DR: Just single people out and they stop.

RM: When we stopped and everyone looked at each other and we were like ‘we’ll just start again from the second verse’.

JBJ: I remember at Evolution festival who was throwing big sweeties at us from the crowd. We pointed to him on stage and there were a lot of retweets and likes on Facebook.

[At this point I mention their cover of Fugazi, the first band they’ve ever covered live.]

DR: We tried to get people last night to not slam dance or beat each other so we thought, why not with a Fugazi song?

In a tweet, you said you laid down so many sound bites that you were considering a move into politics. What would you move into and what would you change?

DR: None of our tweets our serious.

JBJ: We were doing a really serious interview. It kept going super diplomatic. It started in a conference room and we were making it sound like a business interview.

RM: A few of us may think of going into politics.

Paul: I’d form the Scottish Traditionalist Radical Independence Party. S.T.R.I.P. I’ve been thinking of that name since I was in school.