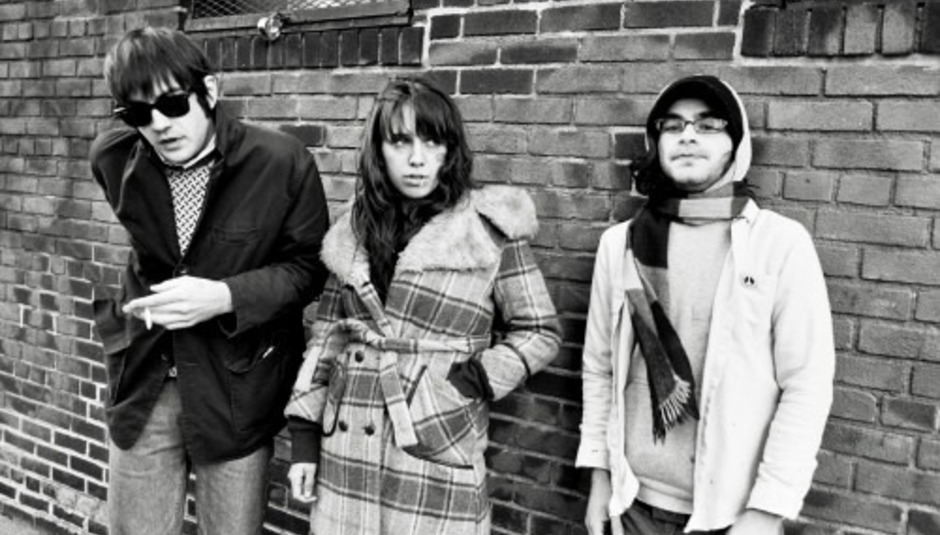 Nursing appalling hangovers in an east London bar, Times New Viking collectively pause and look stumped when asked why people should listen to Dancer Equired, their new album, due out next week. The band, consisting of Jared Phillips (guitar), Adam Elliott (drums and vocals) and Beth Murphy (keyboards and vocals), are visiting from their hometown of Columbus, Ohio for a round of promotional interviews and, it seems, some heavy partying.

Eventually, after a deep breath and a swig of black coffee, drummer Adam offers this: "It only takes 31 minutes. If people have the time that's cool. If not, I’ll understand."

Dancer Equired is something of a departure for the band, whose previous releases have been recorded on cassette and, in the case of 2009’s Born Again Revisited, VHS, unavoidably earning them a “lo-fi” tag. This time around, they’ve gone into a proper studio to record.

So why the change?

Jared : So people would stop talking about lo-fi.

J: My friend Lindsey Buckingham says, it's one thing to go from selling 200 copies to selling the most records ever.

So It was purely a commercial decision?

Adam: The effort wasn't to get more fans, but after we'd made the album we realised that maybe... Well, it's one that my dad listened to and said “oh, that's actually listenable."

B: I would say I wanted to reach more people, I wanted more people to be able to hear our songs and our philosophies and stuff.

A: And I feel we have our ideas down a lot better and we feel stronger about them. So it's good that we did it a little cleaner.

You get fed-up with the lo-fi label?

A: Sort of. I don't think we deliberately went into the studio to not do lo-fi.

J: The records sound the way they sound because we chose to make them like that, but you don't want to make the same record over and over, it gets boring.

B: And also having an engineer was quite a relief to us, we could focus more on the songs.

A: Still, it wasn't like we were sat there going "sorry Jared, that take was awful” - everything was still pretty much first or second take.

B: And we didn't have a producer per se.

So how different did you find it recording in the studio?

B: I don't know, I guess maybe we took it a bit more seriously.

A: And this guy (pointing at Jared), when we're recording he gets so stressed. We had less of that this time.

Do you think the new approach might put off people who liked how you sounded before?

B: There aren't any!

J: If people like us for the right reasons, I can't see anyone being like 'they're selling out” or thinking that we're compromising something.

A: Just ‘cos you go to a studio doesn't mean you all of a sudden know how to sing properly or play your instruments.

B: We kept the ineptitude at the right level.

Fidelity issues aside, how does Dancer Equired compare to your previous albums?

J: I think it's a little more medium paced.

A: Yeah, it's a little slower, less frantic I think.

Was that a deliberate decision?

A: Obviously when we started playing we didn’t know how to play. I'm not saying I'm Keith Moon or anything now, but you'd hope if you play 150 shows a year and keep writing, that you’d get better at it.

B: You at least figure out how to fake it.

A: I'd say it's the opposite

B: Yeah, people like the other, they're like, “ooh weirdos from Ohio, what are they up to?”

J: I don't think we ever struggled to be heard or anything anyway, we never really put any effort in to it. If you just start a band and you don't suck, people are going to hear you.

A: When you have a thousand bands it's hard to, like, pick it out. If you're up in New York, you should probably move to Cincinnati and become the best band in Cincinnati.

J: Kind of incestuous I guess.

B: Kind of drinking centred.

A: It was great at one point, when we were all little, but since we've started and a bunch of other bands, no new bands have really popped up that don't sound like Animal Collective or Vampire Weekend. So our contemporaries there are like people the same age, but the scene's not as hopping as it was.

A: Once a month there's usually a really good show, but people keep getting older, the young guys don't come.

Were you all in other bands before Times New Viking?

B: I was in a band called the Honky Tonks when I was in second grade.

A: Jared and I were in a band that was like a punk rock Creedence. We were pretty lo-fi.

So how did you go from that to Times New Viking?

A: Well our last band split up. And Jared was like, "we've got to play", he was itching to. I think the only reason he went to college was to find band mates, and he was about to graduate from college and not be in a band.

B: And I remember us being at the bar and you guys saying, "oh we came up with this band name Times New Viking", and I was like "that's a brilliant band name, I want to be in that band." And that's exactly why I'm in the band.

A: And we wanted an excuse to not to have to go to class. Our teacher was pretty cool that we were writing songs. And I was always told that you can't make folk art once you have a degree, but you can make folk music...

Do you make a reasonable living from the band?

J: We make a living

B: Not reasonable, but we make do.

A: We're very good at being poor.

B: It's easy to be poor in Columbus.

A: And it's easy to convince yourself that it's alright because you get to do amazing things that you'd never get to do otherwise. And compared to what my father, his father, his grandparents had to do... I can see the world and not have to work in a factory

J: We’re the biggest charity case in music. People do really nice, awesome things for us.

How do you find the British music scene at the moment?

A: People we hang out with are good, but it seems like no one cares about those bands.

B: The music's very American influenced. Everyone sings in an American accent.

A: The music industry seems about three times bigger than it is in America, yet it's so much smaller.

A: You got a 20 year old band who already has a manager and has someone driving them around.

B: Yeah, that's crazy. We just now kind of got a manager that we don't pay for and we've been in a band seven years.

J: In America, you start out and you're a band and you do hundreds of shows in basements for free, and then all of a sudden someone wants to put out your record, and then things start going better for you.

A: You shouldn't worry about press photos before you have an album recorded.

J: But here that's just the way it goes. You can get away with that shit.

A: But at the same time, people that like music and come to shows, get it. They're not as casual as Americans. They're dedicated to music.

How long is Times New Viking going to keep going for?

J: We'll see. We'll attempt to get a couple more fans. We were going to quit when we were 30.

B: Yeah, but we've always had the philosophy that we go where people carry us. We never did anything that was unnecessary or people didn't want us to do.

A: Maybe quit next year and then hopefully in 10 years do a reunion?

So what’ll you do when the band stops?

A: I'll probably be a teacher. Teaching art probably, to little kids. I might write, though I've never written anything.

B: Jared will probably be a session musician. I'm going to move to California.

The dos and don’ts?

Why should people come and see you when you tour here in late April/early May?

A: Because we destroy.

B: And we'll party with them.

Lastly, while I was researching this interview, I came across a quote from someone who described Times New Viking as “the embodiment of not giving a shit about anything.” Is that a valid description?

A: We give a shit about not giving a shit.

B: We're very passionate about not giving a shit.

A: I think if we didn't give a shit I wouldn't be sat here in England right now, so it's a pretty stupid statement.

J: If we really didn't give a shit, we'd be called Wavves.

Dancer Equired is released on 25 April on Wichita.

Times New Viking are on tour on the following dates:

1 // LEEDS, Brudenell for Live In Leeds