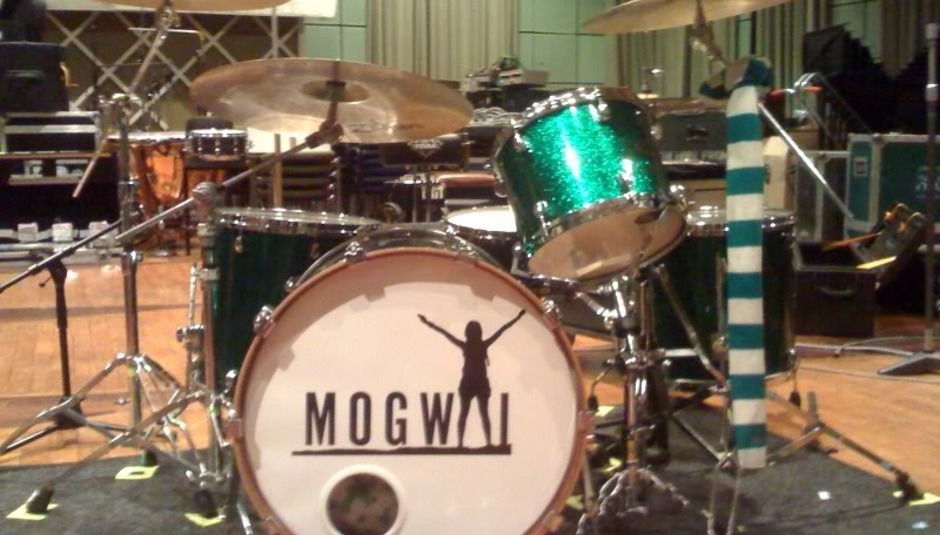 "You Don't Know Jesus" by Martin from Mogwai

That was the first thing my good friend Ally said to me when I met him in the pub after our 2nd show of the year in Paisley.

The day started well enough. I arrived at the show in the town hall in Paisley to help with the set up of the stage. I was amazed at the room, it's a lovely big hall with great ceilings, very grand and ornate. It's great to know that places with a bad reputation like Paisley have these brilliant venues and public buildings. Anyway, after line-checking all the instruments, we waited on the rest of the boys so we could sound check.

We started out with the new songs from Hardcore........ which sounded pretty strong. I think we were feeling fairly confident as the previous night's show in Stirling went surprisingly well for the first gig of the tour. It looked as if we could just kick on from there. Throughout the three week rehearsals for the upcoming shows we focused mainly on knocking the new songs into shape as they were the ones in most need of attention, with the older songs taking more of a back seat as we've played them hundreds of times. Literally.

The tune 'You don't know Jesus' from our album Rock Action was on the provisional set list at sound check. I'd asked the boys if they minded rehearsing it as we hadn't played it since the Metamo Festival in Japan last September and I wanted to refresh my memory of the song. There's loads of wee nuances drum-wise in that tune, things that nobody, not even the boys in the band, would notice so I wanted to make sure everything would be fine. We played it and the song passed without incident. The monitors were sounding fine and I was looking forward to the show.

After having dinner at my favourite chippy, Allan's in Paisley, Stuart and I did an interview with the Celtic View, the official Celtic magazine. Talking about Celtic for half an hour settled any pre-show nerves and before I knew it our tour manager, Simon Smith, informed us it was time to go.

We begin the gig with White Noise and it goes down well with the crowd, most of whom I think are from Glasgow. After an oldie, 'Ithica', we try out another new one, 'Letters to the Metro'. Again this gets a fair response and we start to get into our stride. After a mixture of new and not so new tunes we finish with 'Like Herod'. The night is a success. We don't play as well as we did in Stirling but it was a good show nonetheless and everyone in the camp seems fairly happy with their night's contribution to the cause.

The crowd seem fairly happy too as they make a suitable amount of noise to encourage us to play some more tunes. Who are we to refuse? The encore will be 'George Square Thatcher Death Party',' Jesus' and 'Batcat'. A nice noisy end to the evening. Thatcher goes down well, hopefully more for the music than the title. Next, 'Jesus'. It starts pretty much the same as always, I come in on time, thankfully, and we settle into the song. It's sounding pretty good and is building nicely to the crescendo when BANG! "What comes next?". "FUCK!" I don't remember. Proper fucking brain fart. I actually have no idea what is next and I have played this song more times than I can recall. What do I do? Well, I kinda just amble along hoping that I'll slip back into the beat. Doesn't happen. I keep time with the ride cymbal and I feel the eyes of the crowd on me as well as the eyes of the boys who have now turned around and are asking "what the fuck?". I shrug, with the most purple face imaginable and keep going until remarkably it all comes back to me and we play out the last minute and a half of the song. The boys turn round to me and piss themselves laughing as do a sizeable portion of the crowd. Completely and utterly humiliating, but in the circumstances very funny. I see my brother in the balcony and he is hiding his face. Sorry, John.

Once the hilarity has died down we finish with 'Batcat' and remarkably I remember the whole song. Great. Then something magical happens. Stuart fucks up the end of 'Batcat' quite spectacularly and that seems to be the laughing point as we bundle offstage. Cheers, son.

So......... to the pub. I shirk my after show duties and bugger off to meet my friends in the Bull. I had kind of forgotten about my faux pas by the time I got there but was duly reminded as soon as I walked in and was the subject of ridicule. "You don't know Jesus, son!". What could I say? "I certainly fecking don't" was the reply, "now where's my pint?". Do the crime, do the time. Good friends.