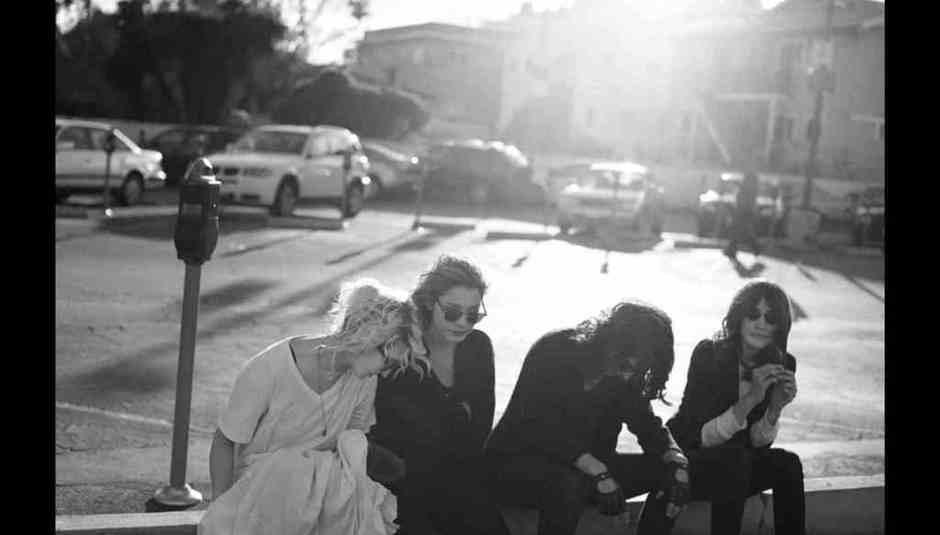 In my first column of the year I intend to cheat, gleefully ignoring release dates partly because it is so quiet out and partly because The Shops have been sitting on extra copies of things with their doughy Christmas arses; oh there they are. My thing, my RULES, MAN - which is why we start the year in a gloriously positive fashion. And have TWO winners.

Hello! So, you look well. Did you get any nice presents?

I don’t know if you’ve noticed, right, but all of Warpaint are GIRLS. Girls! Amazing. Obviously this makes the fact that they are actually sort of alright at music all the more brilliant and worthy of wor attention, because usually girls are rubbish at this; they get their f’s and their c’s mixed up so darned hard, you’d think it might make them swear and I hate it when women do, that shit is disgusting. And you know, if I could just move this flipping bra out of the way and if these painted nails could ever reach this crazy complicated keybaord, I might be able to tell you how ‘Shadows’ is basically heaven on a stick, a wail so degustable you’d think a lady had made it in one of The Womens’ many ovens.

Oh you crazy humans, and your sarcasm.

Because I have the sort of face which betrays pretty much every emotion and thought that flits through my woman-mind - and because this, incidentally, makes lying almost flipping impossible - you rather needed to be there when I put ‘NY Is Killing Me’ on the stereo. And you definitely saw it, you did, you saw that twitch in my right – no, left - eye; how it gaped and flickered fast, like it had been dipped in the strongest of neck oil. And the thing is, it didn’t stop there. There was a look that definitely reeked of puzzle, followed by a brow ruffle that whispered of pleasant surprise; an unexpected gift you nearly trod into the doormat. And then there was a grin. A big one, that might as well have been a large banner, daubed in still-wet paint. A banner which says YES.

I would still quite like us to call Jamie by his given name. Which is Smith. Beige ol' word for such a talented lil' fucker, ain’t it?

‘Walking Far From Home’ is not about gingham picnics, doily kisses or tulle cakes, but it is also not the hemp and oatsack dirge I was perhaps unfairly expecting. Quite literally a pootle - the excursion as song - it is quite like that advert I spect you are too young to remember for Milton Keynes; wherein a cherubic kiddiewink looked out of a car window and pointed out all the beautiful things to be found in THE TOWN OF THE FUTURE. Of course, as anyone with the flimsiest of knowledge or experience of new towns will tell you, this advertisement was pure infamy and lies from concentrate. Unlike this single, which punctuates itself with enough distorts and fizzes to distance itself from the tiresome and ubiquitous ‘folk’, and which eventually parks up in a town called Affectingshire. REMEMBER: IT'S MY FIRST WEEK BACK.

As we (I) have had chance to remark before, there is more than a little of the Josie Lawrences about this here MNDR. I have now decided who she sounds like, and it is very definitely Kim Wilde - who as well as once writing a song about ACTUAL ME (oh hello) was also about as bed-headed and sexy as women got in the olden days of yore. ‘Fade To Black’ also sounds like it is quite now, which therefore means it does the mega retroist’s hat-trick of paying glancing homage to three - maybe even four - decades, because it is well greedy. It’s also extraordinarily tinny, sequenced wrong on purpose and mildly diverting. Incidentally, I would respectfully request that you ignore the stanky Mum-smell that inevitably permeates, when someone starts banging on about how popstars either look or sound like other, older famous people.

After seeing what happened to Mr. Luke Lewis Esq. of the New Musical Expressway when he called into question the physical form of MCR’s Ray Toro, one approaches this review with a certain - very real – trepidation. But I happen to think any band able to quite literally commandeer their fans these days (however horrid they end up being) deserves an automatic dollop of respeck. So, with ‘Sing’ as my gateway, because I (also quite literally) have managed to never hear the Romances before, let me tell you how it really is the greatest bit of popular note arrangement ever to be pressed onto playable, circular plastic; that it really will save your life, end your stickiest woes and maybe even raise from the dead the thoroughly splatted Nigel Pargeter - even though he fell off of Grey Gables and it was clearly stupid foreign Ruairi’s fault. I mean, why didn’t he use the banner as a parachute? BECAUSE HE WAS A THICKY POSHO, THAT’S WHY. In case you were wondering and even if you were not, ‘Sing’ is quite good - especially if you like desperate-sounding and slightly absurd anfems sung for the edification of the disaffected and sidelined. You know, even if MCR are probably despicably, chillingly rich by now, and would not know sidelining if it decked them right in the fizzog with a large, moist pike. And my dad says pike are ‘fighty fish’.

Oho, ‘Our Hearts Are Wrong’ is one of those singles that echoes in an empty room in which a bare bulb sways in time to its pleasingly pared-down slink. And maybe it was the delightful circs in which I let it creep upon me, because it was late, and I was all ruined from a particularly fine day creating all kinds of wonder in my house, but there was little about it that I did not like - trad though it undoubtedly is. I think what we are dealing with here is someone whose voice transcends, it has the sweetness of the most unassuming of cowgirls and none of the attendant short-short tackiness. Twang pop would probably be unutterably dismissive, so let us just be terrific ponces and call it pop with reverb - that happens to have a load of dirt road dust, rubbed into its bleached-blonde scalp.

This has a lovely lazy brass section on it, and I am a nitwit for brass only partly because I used to play the euphonium (don't do this, you only get the rubbish parts). 'Summer Days', however, is some happy-clappy - if not actively cable-access charismatic - pop. That starts out all doom country before wanging off into a postcode of almost dippy gurn. All of which makes it sound well bad. It's just that it's a bit lacking in ambition - like it had started the year all pissed instead of having a really thorough spring clean. What it needs, right, is to get the value bleach out from under the sink and mix it up with a few other cleaning products you're not meant to mix it with. And then not use any rubber gloves, or open any windows. That's what I reckon.


Julio Bashmore - ‘Everyone Needs A Theme Tune’ (PMR)
Julio is right you know, everyone really does. But this isn't mine, and this single is some kind of larks I am not really qualified to write about. Other than to say I found it quite enlivening for the entire time it was ping-ponging about. 'Ping-ponging about'. I mean, you'd think Wire would have commissioned me for some sort of exhaustive feature about 'dance' by now, wouldn't you?