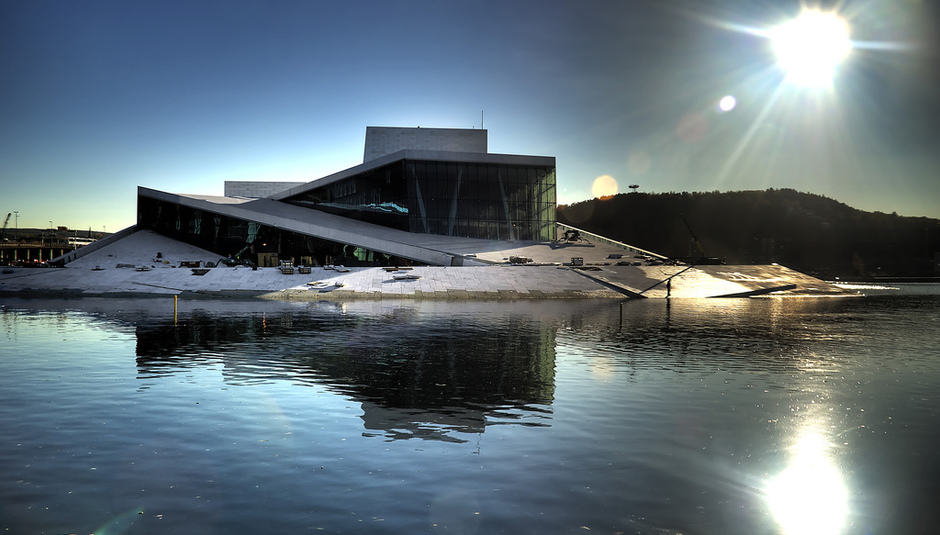 As part of our ongoing series around local interests, we've started to span across Europe and the rest of the world. This inaugural Scandinavian/Nordic instalment comes courtesy of Lazy Acre Records head man Ben Manwairing and fits nicely into our Nordic Music Series, too. he gives us a run-down on the appeal of Oslo as well as a discussion of the artists making waves down the Oslofjord.

As I stepped off the plane in Oslo for the first time two years ago the first thing that struck me was the snow. Fucking tons of it. Everywhere. However, as I trudged back in my front door four days later it wasnt the February cold that had left its mark on me - indeed while I was able to successfully shake the final drops of snow from my jacket I was not able to shake something else - call it a holiday romance if you will but those burgeoning twinges soon developed and before long - as I made my way through the pile of demos and cds that I bought home from that year's by:Larm festival - I realised that I was utterly and hopelessly in love with Norwegian music.

When you tell people that fact its interesting to see their reactions - with non-music fans it's normally a bit of a conversation stopper - "so you run a record label?" "yeah yeah, we specialise in Norwegian music" "oh... how lovely... like A-Ha?" "Er...no"...And I suppose in some ways it's easy to understand their ambivalence; in a world when the NME is still dominated by The Libertines all these years after, and despite the increased exposure afforded by the internet, many people's only exposure to Nordic music comes each year in the form of the Eurovision Song Contest (a competition which has a testy relationship with Norway scattered with some memorable nul points heroes in its catalogue) however if you take even a cursory look at Bergen, Elverum and indeed in the case of this column Oslo - there is a Wonka-land-esque sea of riches for music fans to discover.

The core of the scene according to Oslo-based Scandinavian blogger Erik Petrson is live music; "Live is where it all happens for me - there is live music almost every night in all sorts of bars, bands playing with each other on collaborations, checking each other out, plotting in smoky doorways and darkened corners, and that's where people go to find new music. So many more people are interested in going to see bands live than the times I've spent living in the States and France, and you're rewarded for it - that's where I heard about people like Youth Pictures [of Florence Henderson] and Susanne Sundfør for the first time, both acts that have gone on to be a big part of my listening life".

Agent and artist manager Endre Thesen Harnes concurs that its an exciting time right now. "The Oslo music scene is thriving these days, and with the upcoming release of the by:Larm 2011 (Norway's SXSW, CMJ, whatever) demo panel-picks, everything crossable is crossed and tension is probably building in basements all over Norway." Harnes continues, "Oslo is not only moving on the guitar-based front though, the last month has also seen the release of (mostly) instrumental synth-poppers Pow Pow's sophomore full-length album, Last Days On Earth, and some reviews are naming it the most important electronic album from Norway in years".

With such a buzzing live scene, it was its genesis as a live promoter that spawned one of the central players in the Oslo label scene - Spoon Train Audio - an indie label helmed by various members of indie-poppers My Little Pony and a cast of many. The label is currently gearing up for a busy winter that not only sees them promoting some of the busiest nights in the gig calendar (Xiu Xiu and Band of Horses for two in the coming months) but also working on a number of key records in the shape of Cold Mailman's new album (one of the first artists announced for by:Larm 2011, who set loose their second full-length album, Relax; The Mountain Will Come To You, this month) and a new single from popscene frontrunners My Little Pony (disco floorfiller 'Hard To Be Good') as well as managing a number of other buzz bands including newcomers Honeytraps and Death By Unga Bunga. All this while helping to assist the current rise of DiS-endorsed The Megaphonic Thrift at the same time.

Thesen Harnes says of Cold Mailman's rise; "Pretty much the same as what happened last year, when another project featuring about half of Cold Mailman's varying lineup, Kollwitz, released their debut, Like Iron I Rust, to just about the same amount of critical acclaim. But where Kollwitz's way is metalcore inspired by the likes of Isis and Cult of Luna, Cold Mailman is a more melancholic, subtle indie pop - it's perfectly crafted for stomping about among the Autumn leaves on chilly October mornings."

Spoon Train's almost omnipotent involvement in so many facets of the city's musical output typifies the Oslo approach in my experience. From the outside it seems impossible to keep track - bands weaving in and out of each other for recording sessions and live shows, tracks produced by friends and released on a Chinese whisper network of indie labels (See Sjur Lyseid's involvement in both production for Spoon Train, running his own studio, leading two high-profile bands on the label and producing albums for the likes of How Is Annie records as a great example) to an area receptive and happy to see such a thriving scene on their doorsteps.

This labrinthian family tree and pockets of connected activity is what makes Oslo such an intriguing place for music fans to discover - a great big treasure hunt of obscure vinyl and some excellently oblique song titles ('Eating Fish in Hamburger Heaven' anyone?) - friends of friends and all in some impeccable knitwear. Over the course of (what I hope to be) a series of notes on the Big O, I plan to start introducing some of the cornerstones of this scene - the record shops and bars, the bookers and labels that make the wheels spin round. For now though I wanted to provide a brief introductions for some personal favourites currenrly doing the rounds:

Not actually from Oslo but playing some very buzz-y shows around the place right now, Team Me is a six-piece collective huddled around the Sufjan-y songwriting of main man Marius, crafting a bewitching blend of bleeptronica, folk and out-and-out pop. I've read comparisons to Andrew Bird on the blogvine (which has fallen head-over-heels for these guys) and those comparisons aren't far off the mark. Not least with this track - recent single 'Weathervanes and Chemicals'.

Team Me - Weathervanes and Chemicals from simen skari on Vimeo.

As a former backing singer for Norwegian enormo rockers Madrugada, Ingrid Olava has been cutting her songwriting chops for some time now - her show at by:Larm this year was a packed-out affair replete with a hypnotic rhythm section to flesh out and bring life to her piano-led torch songs. There's an EP out (Please Welcome) over here on October 25 which is well worth your time. Not sure if this track is on it but it's certainly a live favourite!

Fans of Youthmovies and their epic post-rocky ilk will find much to love in Youth Pictures. Fleshing out a defiantly song-led sound with cellos and washes of chiming guitars turned out to be a bit of a masterstroke, as the band hit their stride with a double LP earlier this year (Puzzle the Detective on How Is Annie Records) that was as glacial and spacious as it was achingly beautiful. Imagine that outro to '...Spooks the Horse' played by Sigur Ros and you're somewhere close. Epic stuff.

On the other side of the pendulum you have the Ostfold immigrant (rural county southeast of Oslo) garage rockers Death by Unga Bunga. The guys have - since they destroyed by:Larm 2010 - been all over Norway with their, mildly put, energetic live shows. Embraced by both the hipster crowd and the garage rock puritans, with their debut album's Norwegian release in November and a 7" due on The Cynics-run label Get Hip overseas, Death by Unga Bunga are kicking and screaming their way towards the masses.

If all of this has piqued something of an interest then why not stop by a few MySpace instead of watching that clip of Pink get slingshotted into the barrier again:

You can find out more about Lazy Acre Records here, more from our Nordic Series here and more local columns here.