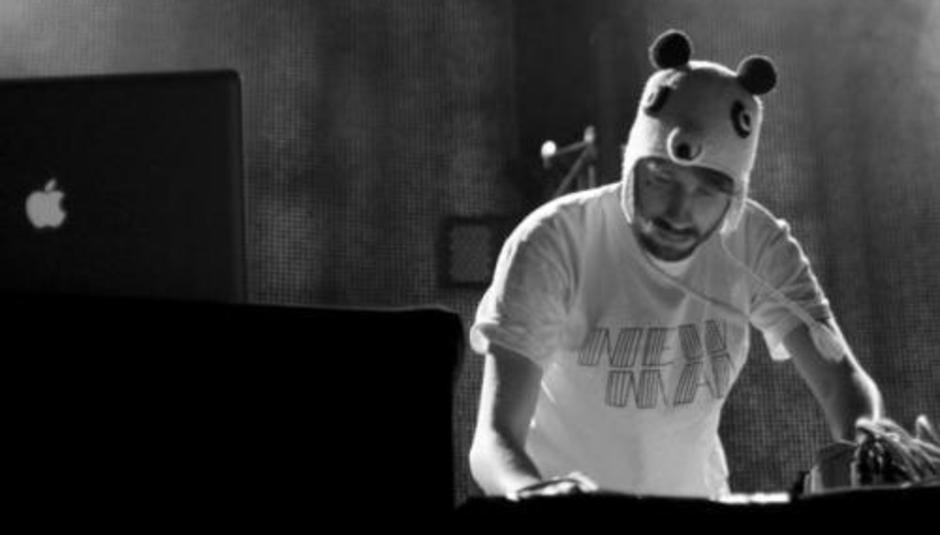 DiS has had a distant love affair with a man named Derwin for quite some time. Some might say it's the way his rhythms purr. More likely, it's the fact his bitchiness mixed with self-loathing on his Twitter regularly has us in stitches. The combination of the two is intoxicating.

He played a couple of shows for DiS last summer and has since ridden the blogwave into the BBC Sound of 2010 list silliness, toured the US with Health and Autolux, and all the while, he's been weaving together his beats and found sounds, to create Lucky Shiner, one of the finest debut albums by a Brit or otherwise, for quite some time. It's a perfect soundtrack to searching for your lost marbles at 4am, as much as it's an ambient isolation chamber for your elevensies.

Rather than simply admire him and his glitchiness from afar, we've tried to have a conversation with Mr Gold Panda on numerous occasions but he's always had his headphones on, staring at his GameBoy. Little did we know he was composing his next opus whilst waiting for the train. We now know what he was doing, so decided it best to ask him about how that little green-screen of joy fits in with his his laptop and loop pedals...

DiS: Do you remember your first GameBoy and how you felt peeling the scratch resistant seal off of the screen?

Derwin: No because I got a Sega GameGear with Sonic and some other platform game that was incredible. I don't remember getting a Gameboy, I kind of just ended up with one. I think I was put off by the green screen.

What were your favourite games when you were younger?

Lots of Commodore Amiga games. Moonstone, Alien Breed, Superfrog, Apidya, Walker, IK+, Supercars 2, Parasol Stars. Cannon Fodder even though I was crap at it. The port of Street Fighter 2 was hilarious, 6 buttons down to two joystick ones and so many hit detection errors, Guile had this kick that if you blocked it still hit you about 8 times. My friends had Megadrive and SuperNES so Rock n Roll racing and Mario Kart. Back further my mate had an acorn electron but I can't remember many of the games. Barbarian, QBert and Mr Doo were winners I think. Vindaloo was also good, about a spaceman who was in dire need for the toilet after a bad curry. I could never get past the snakes.

Which game, in your professional opinion, had the best soundtrack?

Hmmm, I can't think now but Streets Of Rage was pretty amazing. People who cracked games for Amiga would have great tunes on their logo / boot screens.

Was it more the allure of being able to make music on the go, with something that fits into your backpack?

Fits in your coat pocket! Its so nice to feel like you are being creative on a train journey or something.

To what extent do the restrictions and limitations of what a GameBoy can do help you make music?

I always like to be limited. When I use Ableton I only probably use about 5% of what it is capable of. I like things to be simple. I have no use for a studio so sitting on a sofa drinking tea and mucking around on a gameboy at your parents house is quite fulfilling.

How much of your album incorporates music you've made on a GameBoy? Or is it a separate project?

Just at the start of "Marriage" there are some glitchy sounds. That's a GameBoy. The kick and the hi hats too. I'd like to do one that is just gameboy tunes for download or something

What equipment and software do you recommend for anyone thinking of making music on a GameBoy?

Nanoloop, LSDJ or the buy the camera, there is a music program built in. If you have a DS there is a lot of homebrew stuff out there. Nitrotracker is good. You can jailbreak your iphone to run a Gameboy emulator, there must be a rom for that.

How much musical know-how do you need to make music on a GameBoy? Is it as easy as playing Warioland?

I think anyone can pick it up but it might take a bit of getting used to in these Ableton easy drop wav file times. Maybe if you've used a 16 step sequencer or musical tracking software like Octamed or Renoise before, that might help.

Is using a GameBoy emulator on a computer utter sacrilege?

That is really up to the person making the music to decide. Different hardware will give you a different sound.

Why does most chiptune sound annoying?

Why do most U2 songs sound annoying? Like The Dude said "that's just, like, your opinion, man."

Why haven't your soundtracked a computer game yet?

I haven't been asked.

Could you list your top 5 tips for making music on a GameBoy....

Lucky Shiner is out now as a digital download. Details on pre-orders for vinyl/CD can be found at www.luckyshiner.com