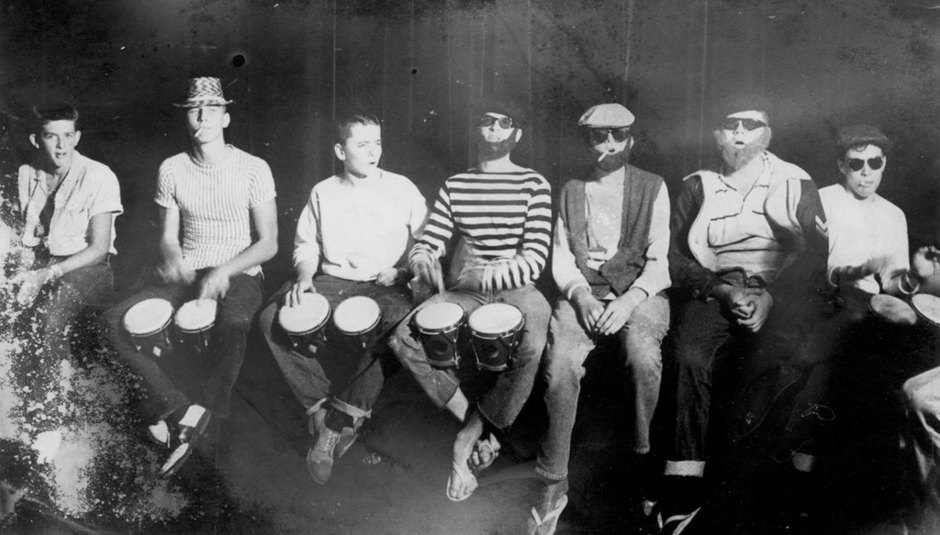 Even though people who say ‘Yar, so I don’t really want to get into anything serious’ are the absolute dreadest for we hopeless romantics to get off with, Robyn is here to tells us something about which she is quite clear; you are absolutely effing not allowed to FALL IN LOVE WITH HER. Naturally this is all done to the accompaniment of some absolutely sublime synthesisings, and naturally the whole thing chimes with joy. As for me, I sang it on my bike while paying no heed to any pedestrians I happened to be passing, made up some very literal dance moves for the choruses and could not listen to it sitting down. I may also have very possibly (though I refuse to confirm) have found myself the tiniest bit wobbled. Because the surety of the idea – tra, la, la, don’t fall in love with me, right – coupled with Robyn’s unrivalled grasp of melancholy, make for a wonderfully soaring - but also strangely sad - single. You see, ‘Hang With Me’ tries to posit the idea that it is possible to hit the brakes on how you feel; to feel a bit, but feel no further. And of course, this ability to quell is pure poppycock, unless you happen to be made of circuits.

Let us pretend you are at a party, let it be a hactual happening with beatniks, 'jazz' and blistering, full-colour cine blaring on the walls. You are behind the decks with all the vinyls, and you need to play something to compel The Most Avant Boy In The Room to talk to you. And because this exact situation is doubtless going to happen to you in the very next week (otherwise, WHAT ARE YOU DOING EXACTLY), luckily I have just the very single. I mean, 'Yang Yang' - or 'Yarng Yarng' as Anika has it - may just be her doing her best Nico impression while the sleaziest of sirens blaze all about - but that one in the beret will not be able to stop hisself, he will have to ask you what it is. The other thing to say about 'Yang Yang' is that even though I usually run a mile in the other direction from anything that has arty B.O., I bloody love this.

I think if Hurts sounded like Detachments it would all be alright; all we musical commenters could then deftly untwist our knicker elastics and get back to shouting about how many bands we recognise in the average ATP line-up. Or perhaps you should just buy Detachments, if synth pop with huge dollops of doom on it is what you are after; they do it very, very well. I mean, I don’t care, do what you like, it’s all the bleedin same to me.

Of all the things one could have expected from Paul Simon’s son, punishing industrial techno with uncompromising lyrics about asphyxiation-based rudeness was not exactly top of my list. Of course, I AM MAKING AN AMAZING JOKE HERE, because Harper is very much his Father’s Son and I have no problem with that; none gripes. 'Berkeley Girl' is almost spookily crispy and delicate, the only thing it is missing is a curly haired co-conspirator. I think we should all just let him get on with it.

About a week ago, I was packing a suitcase while listening to the Aeroplane album. And I was cursing my own essential self for not being good at packing, as well as coming up with powerful (POWERFUL) arguments for how people who are crap at putting clothes into a suitcase are conversely good at life. The trouble is, Aeroplane’s album is not what you need when you have to get up at Advance Train Ticket O'Clock - all it did was thumb its nose at my silly provincial ideas about sensible bedtimes. Of course, while it pleaded with me to dance and pretend I was in a music video and try on every single dress I own as if I were Julia Roberts in a divvy montage with a beardy man, I was having none of it. Because I was busy making complex academic notes about how 'Superstar' sounds like what might happen if Aeroplane had kidnapped Daft Punk’s robots. And they are making them wear lame jumpsuits and stack-heeled boots; making them go glam, whether they like it or not. All of which makes 'Superstar' sound like an ick bit of retroism, when actually it is the uncommonest of larks. If - strictly speaking - slightly forgettable.

‘Sex Karma’ is not awful by any stretch of the imagination, but I am not sure you would even know Solange Knowles was on it if you had not been told. I think these Of Montreal nitwits have put her in the wardrobe after telling her this is How They Do; it’s their thing. Ever compliant, she hops inside, but not without protest, she is no fool. ‘Ah guys - guys - how are you going to record my epic soul stylings if I'm stuck in here?’. But poor old Ms. Knowles is ignored, because Of Montreal are too busy sniggering to themselves as they put their lyrics through the Prince-u-tron and then dawdle about at the business end, to see what comes out on the tickertape. ‘SLANGE, WE’RE GONNA CALL IT SEX KARMA, YEAH?’ is what they shout through the doors, and she is getting a bit worried, and a little hungry. And actually - come to think of it - that is sounding suspiciously like the turn of gravel under car wheels. Rotters!

'Casual' begins with some muffled organ that sounds like the noises Ivor the Engine used to make, it really actually do. And then it basically just drifts, a very sepia sort of musical cumulus, gracefully picking up bits of the olden days until it is fit to burst and has to rain it all down on you; all those Byrdsian harmonies like so much warm drizzle. What a terrible review, for a very pleasant record.

All very evoking, ‘Golden Haze’ has its plimsolls firmly planted in 1991 but is no less enjoyable for same. And even though it has some slightly flimsy - if not actively kaleidoscope posterish - lyrics about ‘beautiful ones’; and even though it spends the entirety of its four minutes and 21 seconds looking at the floor; I am not sure I mind, perhaps there is some money down there.


The Hundred In The Hands - ‘Pigeons’ (Warp)

I am trying to put aside the rather snitty idea that I liked The Hundred In The Hands a lot more when they were less shiny, because ‘Pigeons’ really is awfully good, it has a melody worthy of The Et, a lightness of touch that would shame a feather and a rather amusing video in which a teenager throws so many naughties down her neckhole, she actually sicks up FIRE. Young people! You are crazy.

Unlike Robyn, Bright Light Bright Light are absolutely delighted to have fallen in love again, they are that slightly dim friend who never learns and is always saying how this one is The One; it’s different this time, they can feel it. And I think I believe them, largely because ‘Love Part II’ is so absurdly polished. You know, you could do your make up in this single. Even flicky eyeliner, and even on the bus.


Lorn - ‘None An Island’ (Brainfeeder)

This week there was time enough for two bike rides with my playlist, and one of them was at night. Which is when ‘None An Island’ - with its glitchy, techno stylings - started to make sense. In a Twilight sort of way. And though they will no doubt kill me for saying that (they must be quite hard, if they are on a label called ‘Brainfeeder’ so it would be good if at least one of you could volunteer to 'get' my 'back') I don’t actually mean that in a horrid way. What I mean, right, is that this deserves to soundtrack threat, high cheekbones, absurdly expensive cinematography and some artful woods. Ones that have Ladies In Peril in them.

When I was ill as a child, I had some bliddy strange nightmares in which all the grown ups were absurdly tall. They also talked in a rather Lynchian, drawn-out way. Anyhonks, the vocals on 'Purple Arrow' are very like that. Now, I realise this isn't very helpful. So I will also tell you it is woozy.

A delightfully syncopated backbeat allows ‘The Salesman’ to unfurl at quite a stately sort of pace. I’m a bit allergic to the opening vocals, but when it gets going its all rather amiable, in a warmly harmonious and rather trad sort of way.

UNKLE - ‘The Answer’ EP (Surrender All)


Wendy is on Twitter, here. Those people at the top are actual real, live Beatniks. They are RAD.