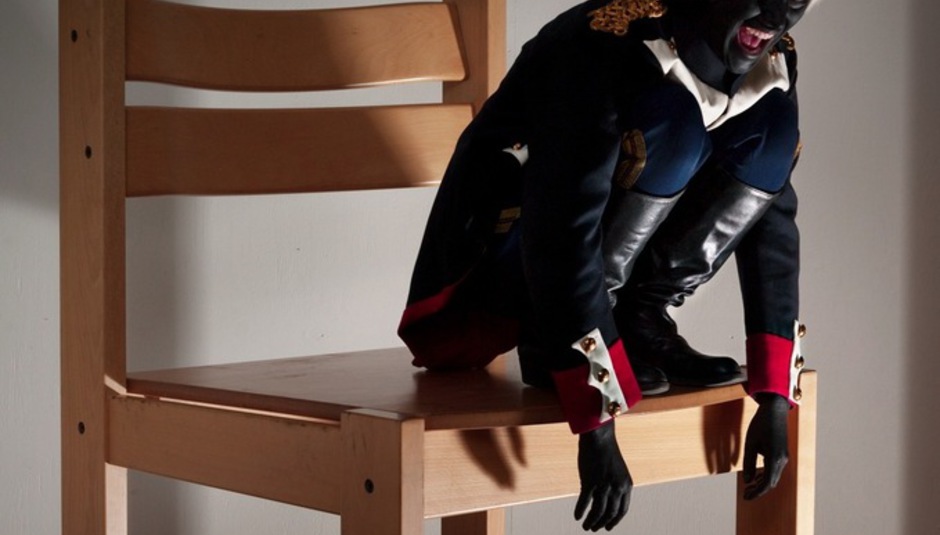 Some things about ‘Shapeshift’ then.

1 - It has been two years since he released ‘Lazy’, which is a long time. Or to look it another way, he is doing this thing at his own – entirely comfortable - pace. Which makes him an admirable, careful sort of cat.

2 - The video is monstrous, monstrous good; a simple idea well executed. Also, he is wearing a very nice top in this bit:

3 - It has a line about his Mum. ‘Lazy’ also had a line about Dels’ Mum (I notice these things). In fact, nearly all of 'Lazy' was about your Mum being all like ‘Get out of bed you silly old stick’. So, using the tabloid journalist's extrapolatory method of turning two out of two into something that sounds much, much bigger, this IN TURN means 100% of Dels’ output has been about his Mum. Here are some supporting materials:

4 - Dels has studied design, which is why the ‘Shapeshift’ artwork – though grotesque – is so extraorder.

6 - 'Shapeshift' is a straight up, enlivening hip-hop jam. Which - like many hip hop jams before it - is about how Dels is the brillest, especially if you were to compare him to everyone else on the planet. But it is not all bitch this, bitch that and bitch the other. It is also not about how Dels' Man-Stick is bigger than your Man-Stick. It’s just (just!) an amazing, propulsive, FRESH thing that has some epic throb-speaker on it. I have played it five million more times than you, right, and none of its brilliance has worn off. NONE.

Because all Grinderman songs are about Bad People to whom Bad Things happen, but said bad things are a bit sexy and Godless (which means they are in fact good), you might find yourself listening to ‘Heathen Child’ and wondering if it is all just a bit too willfully self-parodic. I’m not sure this matters. And because I think one of the supreme qualifications for being a journalist is the ability to draw a circle around two or three disparate things and pretend it is evidence of something else; and because I need only the flimsiest of excuses to come up with a theory; I don’t feel I have to listen to all Grinderman’s records in order to tell you either who they are or what they do.

‘Oho,’ is what I began saying to myself in typical self-satisfied fashion, ‘Oho, there is a new Grinderman single, I bet I know what that is about, it will have a woman in it who thinks Dog is rubbish. And she would cut Dog in Asda if she ever saw him in the deli aisle.’ You see, I'm not the only one who thinks this, the press release about the single was forwarded to me by Mon Editor. And he prefaced it with just two words, which were 'REAL MEN'.

I have seen them right, I saw them twice at the ATP they curated and two things happened. One, while divvying about in my handbag looking for a pointless feminine accoutrement - and not looking where I was going, skipping along in stacked heels even though anything other than bloody plimsolls will get you shot in Indie - I stopped short. I realised there was someone rather tall just in front of me, see, so I looked up and there he was, Mr. Nick Cave, in his impossibly well-cut grey shot-silk suit, towering over one. Now, there aren't many times in one's life when one is compelled to do a real-live swoon, but I definitely did one, I got it, I 'got' Grinderman rightverythen.

But the Nick Cave in my ladybrain is not that one, it is not. How I remember him, is when he was slamming his hand down on the piano and unfurling the longest arm I ever saw in music, and in my head he has absurdly long fingers, unfurling like a scary puppet. And though I don’t need to tell you what the long fingers do signify; or what they made me think about as he waggled them at the crowd; I can show you my Mind Cave, as I have attempted to draw him: Lucky for you, as the connections between my imagination and any pencil I happen to be grasping are shot and faulty, I have managed to call upon someone with far superior (and actually a bit sick-making) skills. So I described the Nick Cave of my Woman-mind to Mr. John Allison (here, here and here, do read and look at ALL OF IT) and he very kindly agreed to draw my Mind Cave for me. And what do you know, it was Just Right: Oh yes, in case you were wondering, 'Heathen Child' is wonderful.

OHMY, this is EXACTLY the sort of thing I am pashing on at the moment. 'Hold Me Back' is wick, WICK. You will hate it and we will never speak again, it's all going to be quite, quite awful.

When I picture Karin Dreijer in my head, I think of her doing needlepoint or buying silk flowers in John Lewis because she can't be fannied with real ones; it's the dust, you see. Mainly this is because I am a contrary sort who will not have any of this black-faced, chair monkey business Ms. Dreijer WILL INSIST on using to promote her records. But it is also because she frightens me really real bad. The thing is, sometimes I worry that liking Fever Ray is rather like having a very pesky friend who is continually tapping you on the shoulder and shouting 'BOO!' in lieu of a nice hello-how-are-you or whatever. And the fact that this is not annoying is quite the conundrum, I don’t know how she manages it. ‘Meeeeeeeeehrcy Streeeeet’ - as Karin would have it - is pretty marvellous. I just don’t want to listen to it and you can't make me.

What I want you to know about Pulled Apart By Horses – apart from the fact that ‘High Five, Swan Dive, Nose Dive’ is a terrifying and thoroughly amiable blast of fuzz / that it includes a lyric about ‘balls’ being ‘on fire’ I find all too alarming – is that they are funny, generous, kind-hearted coves. And quite naughty, because they talked about Matt Bellamy’s pyramid as part of their tween-song chat when they were supporting Muse on Saturday. The other thing - which they probably don’t want you to know, but I think it is quite darling - is that guitarist James Brown likes Fondant Fancies. The Mr. Kipling ones. I know this because he showed me the box and then said ‘You can’t have any, these are mine!’. And I knew he was serious, I know a Real Caker when I see one, all that sugar goes straight to their crazed, sponge-appreciating eyes. But do forgive, because not seconds later he ran off to go and get free booze wristbands for everyone he had so much as said hello to that day. And that is rather sweet and very generous. What a racket they make!

So then, how adorable are the above man and lady? I mean, this video above is not the single, but you get the idea, Tom Brosseau and his Angela Correa cover songs they like and never do none of them a grand disservice, it is all about the Covers Respeck for them. And if we are going to file singles according to the specific moment they should soundtrack (and we are, we are), let this song (an Andrews Sisters cover) be the one you listen to as you wait for your roast chicken to do its last bit of crisping up, on a Sunday, in a warm kitchen with a huge, scored, oak table, and all your favourite people round about. I mean, I over-use the word delightful, I make its ten letters work hard for me and I stopwatch it when it goes on loo breaks. But ‘Rum and Coca-Cola’ really is delightful, there’s no escaping it.

Blue Daisy and Black Acre are responsible for something I have played to death and been TOLD OFF for over-analysing (i.e. this). ‘Raindrops’ has a very different sort of atmosphere; it has crackles, faint Chinese strings and whispery vocals that zoom in and out as if someone was playing silly buggers with the dials. It’s got nothing like the same weight or doom ‘USD’ might have had - but if you listen really, really hard, something bad is coming, there is undeniably some bass threat in there. Bass threat! It is my favourite kind of threat.

‘Marina’ starts off all dread, all Star Spangled Banner being played on an ‘axe’ rather than one of your common or garden ‘guitars’ (see, I know all the words). But then it goes all warm, twangy and affecting. Were it any sort of beam, it would be a shaft of light, and the room it is coming into has high ceilings. But because Sleepy Sun are (oh LORD) 'Psych', it is not merely a shaft of light, but a DEATH RAY. Do you know, if you go to see Sleepy Sun it will wonk your brain right into next year and you will end up wafting about convinced someone out of Strawberry Alarm Clock is trying to communicate with you. But really it will just be that bossy robot at the Post Office saying 'Cashier Number ONE, PLEASE' and you will NOT EVEN REALISE. Just be careful is what I am saying, a tiny pinch of Psych goes a very LONG WAY.

‘What is wrong with vanity?’ sings Ólöf, in this plaintive, airy and quite daft bit of wibble-strum.

Inordinately glitchy. Also, the press release describes this as the sort of record Marvin the Paranoid Android might make, if he ‘were put on a course of anti-depressants, got laid by a washing machine and munched enough ecstasy tablets to explode a cat.’ Which is all very silly. But you know, glass houses, glass houses.

Orchestral Manoeuvres In The Dark - ‘If You Want It’ (100% Records)

Fortune - ‘Under The Sun’ (Distiller)