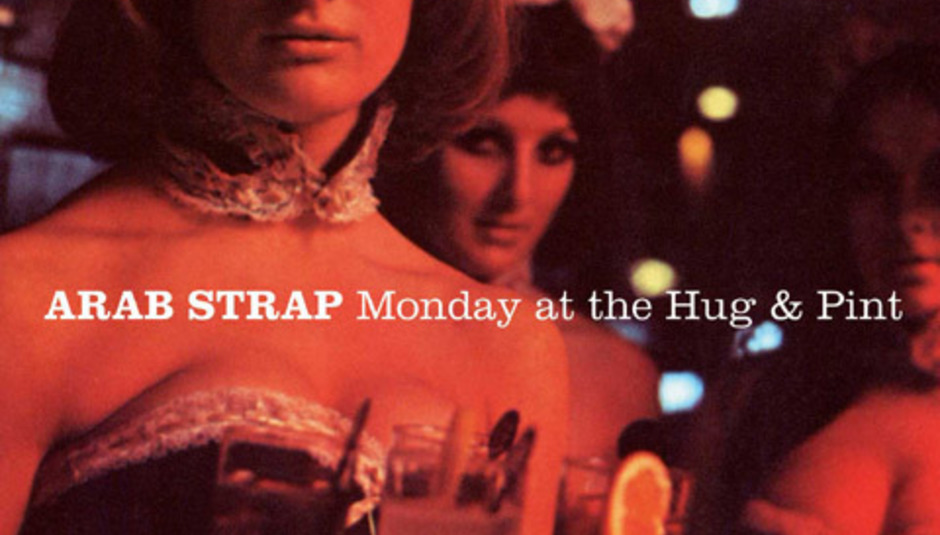 As part of our 10-week “DiS is 10!” celebration, we’ve asked 50 of our favourite people to tell us about one of their favourite albums of the past 10 years. Here, DiS contributor Neil Ashman shares his choice... I find myself in a similar conundrum to our very own David Pott-Negrine in his appraisal of The Hold Steady’s Boys and Girls In America as I sit looking at the provincial would-be glamour of the waitresses who grace the cover of Arab Strap’s 2003 album, Monday At the Hug & Pint. I’m struggling to think of one lyric from Aidan Moffat, a man I consider one of the greatest lyricists these isles have ever produced, which can encompass the qualities of this album and my feeling towards it. It doesn’t really have one stand out lyric, such as the oft quoted opening couplet of Philophobia, ”It was the biggest cock you’d ever seen, but you’ve no idea where that cock has been”.

What Monday At the Hug and Pint does have, in the form of the throbbing dance pulse, spritely fingerpicking and urgent melancholic strings of ‘The Shy Retirer’, is one of their greatest and most immediate songs. Had I heard any other Arab Strap song as a 17 year old, I doubt it would have had as startling an impact on me and while I was hooked by the melody and surging drama of the violin and cello, it was the realisation of Aidan Moffat’s lyrical prowess that made me stick around for its parent album.

Aidan Moffat’s reputation as lyricist was built on his well observed narratives, honest pathos and acerbic wit. ‘The Shy Retirer’ has plenty of the latter two, but its lyrical form is perhaps more conventional, yet with prize couplets aplenty: “I want to fall in love tonight and for the perfect unbreakable bond/You can be my teenage Jenny Agutter swimming naked in a pond”, which is followed by “You know I’m always moanin’/but you jump start my serotonin”. I remember an incredible thrill in finding a lyricist who expresses his pessimism and romantic nihilism in the sort of articulate rhymes that open ‘Flirt’ (”You said you didn’t mind if she turn round to sleep/But you were just half being nice, there’s no reward to reap”) and ‘Glue’ (”Sex without love is a good ride worth trying/But love without sex is second only to dying”). So here’s where you go when you’ve outgrown Morrissey! (Although it’d be churlish of my to suggest I really had)

Of course great lyrics alone do not a great album make, you need the tunes too (somebody should tell Morrissey that). Whereas on previous records Malcolm Middleton’s sparse arrangements gave lots of space for Aidan’s (often nearly spoken word) narratives, on MATH&P he refined his compositional skills and played a greater part in shaping the song themselves, resulting in tighter and more concise songs. Equally, however, the arrangements, which included piano, found sound and a full-time string section in the form of Jenny Reeve and Stacey Seivewright, in addition to the usual guitar and drum machines, were also sonically more expansive. Many of the songs are still rooted in Middleton’s intricate fingerpicking, acoustic guitars taking precedence over electric, but ever present string section undoubtedly makes it their lushest record. See the gorgeous sweep that opens ‘Act of War’ and the horn embellished racket of the outro as Moffat refutes accusations of domestic abuse (”The truth is you’ve always been clumsy, be it with tables at your work or with my heart”). ‘Serenade’ is a sumptuous blend of layers of guitar, piano and strings propelled by an urgent drum machine beat and culminating in the sound of fireworks after brief respite of acoustic intimacy. For those fond of Arab Strap more abrasive earlier sound there’s the cavernous drums and waves of distortion of the bitter ‘Fucking Little Bastards’ which then disintegrates into a distant muffled Middleton-sung strum interrupted by a paranoid answerphone message. It may their most accessible record, but being Arab Strap it’s still not for the easily offended, musically or lyrically.

While the record maintains their signature intimacy, the organic feel of the achingly gorgeous strings and the lap steel contributions of Mike Mogis of Bright Eyes (Conor Oberst does backing vocals on ’Flirt’) takes Arab Strap into the great outdoors, and nowhere more so than on album centrepiece ‘Loch Leven’. The sound of skirling bagpipes and pissing rain may engender somewhat clichéd notions about the Scottish highlands, but it’s a beautiful backdrop and Moffat fills in the foreground with the usual intimate thoughts and details; for every “Day of skies” there’s a couple who “Fell to bed to grunt like beasts”, and for every swooping hawk” this couple bluntly converses, “Fuck me says he, fuck you says she”. Apart from being their most Scottish sounding record it is fascinating for being their most Scottish album thematically also; alcohol as a social focal point for sadsacks on the rousing piano singalong of ‘The Week Never Starts Around Here’ (”You raise your cider and I’ll raise my beer”) is an obvious point in case. A little more obscurely, Moffat seems to tap into the long thread of Jekyll and Hyde-style dualism in Scottish literature (see other works by Stevenson and James Hogg) as he laments his darker (probably booze-fuelled) side on ‘Who Named the Days?’ (”He makes me treat girls like shite, he makes me lie to them and use them”).

To focus on Monday At the Hug and Pint as a great Scottish album in particular though, is to underrate it. It is simply a great album and in my opinion their masterpiece. As an introduction to the group it is perfect, as I can personally attest, but in its own right it is much more than a gateway to Arab Strap’s more difficult material. In the intervening years it’s an album to which I’ve frequently returned, various aspects of it becoming more relevant with age and experience, yet ultimately the reason I’ve remained a regular at the Hug and Pint is that it is record of great honesty, wit, song-craft and beauty.