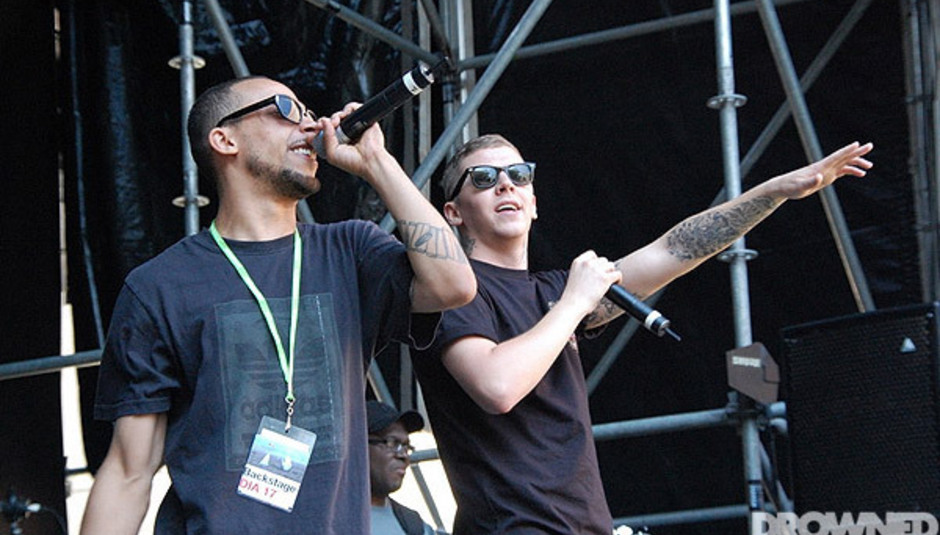 Who rock the party like Alex Baker and William Grant rock the party? NOBODY. This is why we sent them to this year’s Sonar festival, the better to write important words about it. Here are their Thursday related musings – for Friday go HERE, Saturday HERE. Photo by Ben Brown.

New hip-pop starlet Professor Green is gracing the stage with his sampled tales of partying and ironically laddish behaviour. This, I was not expecting (save for the fact that I’ve come to see him after seeing a recognisable name on the programme…). His tunes do seem to fit the sunshine laden area pretty well, but when it comes to the music itself, it’s hard to see past anyone who uses a Haddaway sample. (WG)

Speech Debelle’s rise seems to have stalled since that Mercury thingy plopped into her hands. Her band creates the purest of acoustic based beauty, but Speech herself has always peddled a certain vitriol that doesn’t quite sit right with her musical backing. On this occasion, her shrill voice is so overpowering that it becomes piercing, and makes the whole scenario even more uncomfortable. (WG)

Descending into the depths of the Sonar Hall, I find Broadcast bringing a set that seems to weld the embryonic forms of alternative composition of audio and visual. Their projections play on an almost early Aranofsky feeling and backdrop their darker-than-dark new material pretty well. However, the simple beat-laden material from Tender Buttons undeniably brings a shred of respite from the darkness to the baying crowd. In fact, some take it upon themselves to even shout “lighten up” to them, allowing Trish Keenan to finally leave her own dark shroud of jet black hair to respond with a courteous “Well, fuck off home then!”. Maybe not what some were expecting given the obligatory joyous vibes sought after, but they are the first to bring a very welcome alternative to the prevailing mood. (WG)

It says a lot about the success of Caribou’s latest album Swim that the quirky and experimental artist has now fully stepped out of the shadow of Kieran Hebden and established himself as one of the stand out acts in a festival of Sonar’s calibre. Unfortunately every other soul there seemed to agree, and thus actually getting into the tent that is SonarDome was an achievement in itself as the crowd stretched far outside its boundaries. I could only imagine how his complex, rich and intricate music would sound live, and the site of this quartet, hunched meekly around their instruments did not fill me with great confidence. However, they not only pulled it off, they smashed it. The drums were as tight as any machine, as were the synths, guitar, tambourine or any of the multitude of other instruments they played. The sound, however, did not quite measure up to the display of musical accomplishment, and as such certain tracks lost their gusto. ‘Jamelia’ was the biggest victim and disappointment, with the dramatic synth section practically inaudible. The set’s closer, ‘Sun’ sent everyone wild as the introductory synth progression rolled out over the crowd. However, the decision to place Snaith inside rather than on the main outdoor SonarVillage stage felt like a big tease, as when the emphatic chorus of “SUN SUN SUN!” joined in, it seemed not only incongruous but extremely unfair to be hidden away in a dark tent while the Barcelona sun beamed down mere meters away. (AB)

Removing myself from the now somewhat restricted surroundings of the daytime, Ryoji Ikeda beckons the throng towards the Theater Grec, Barcelona’s ancient amphitheatre. His installation of lights within the theatre splits the sky into two, and is as much interactive as it is artistic. Lights dim and switch when connected with the human bodies that surround them, while ambient noise and coded electronics envelop the open air. It’s a beautifully serene environ considering the hectic swarm that enveloped the day, and serves as a simplistic yet mind-altering perceptive experience. Ikeda’s set within the gardens comprise mind-boggling shifts in white noise and Aphex Twin-style electronica combined with algorhythm flashes of barcoded images. (WG)