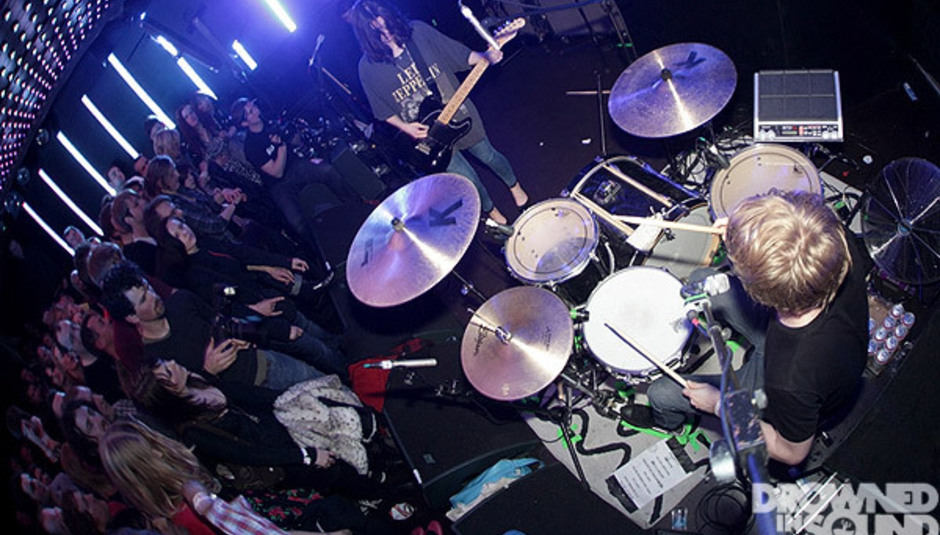 Rather than try to "review" all 300+ bands who played The Great Escape in Brighton last weekend, we decided to focus on the best bits.

Egyptian Hip Hop: Egyptian Hip Hop were 'one of those bands' who you hear a lot about but never actually get round to listening to. I feel a bit silly now, as the four members of indeterminate sex (from where I was standing) dressed in technicolour dreamcoats forcefully push their yelps and often frantic chord strikes into my widening lug-holes. Redolent, in some aspects, of The Cure. The lightshow behind them makes me feel a bit sick, though.

Sky Larkin: The room the Leeds guitar-pop trio played was quite small, hot and, as you'd expect, cramped. Not that anybody particularly cared, as Katie, Doug and Nestor – placed somewhere in the distance due to the oddly shaped stage – rattled through a couple of new and a few old ones with characteristic volume and vigour. There's a hole in my soul at the moment and it's the shape of the new Sky Larkin record.

Susanne Sundfør: Now, this was a pleasant surprise. The queues for Wild Beasts were near-monumental and deservedly so, but I fancied a sit down to some Norwegian music (as has been the case a lot quite recently) and, thank the lord, Sundfør's performance at the Unitarian Chapel didn't fall short. 'Haunting' was one word you could use to describe her rolling vocals and languid musical formations, which she plays out in full without so much as a break for breath in between each and with only a portable-organ type instrument for accompaniment. Morose.

Ganglians: I can take a guess how this quartet got their name. Their lead-singer's body has more in common with a praying mantis than it does any other animal, human included. When they finally get their shit together it's entirely worth it, despite the faffing and fannying lasting almost as long as the actual playing of songs. Laid-back doesn't quite do it justice, but there's more of a clout live than on record as the layered vocals take the forefront, with an ever-present fuzz nestled messily in the periphery.

Esben And The Witch: As usual their pulsating spookiness resonates in the mind, body and heart. Though the setting of Horatio's Pub on Brighton Pier (kinda budget, Holiday Camp style) is not the best fit, it doesn't matter much, as they decide to play their set largely in the dark. Probably the busiest I've seen the venue throughout the weekend, too. Whether that's due to them being from 'round these parts or just the overall quality is immaterial, the latter is the important part. An album soon, please?

The Cabin Fever: What? I thought Real Estate were meant to be playing? This lot don't look very American. Nor do they sound it. Oh, it's not Real Estate? Who is it? It's The Cabin Fever. The Cabin Fever? Yes. Oh OK then. Maybe I'll stay for a few songs just to ch...maybe not, eh? Anyone for doughnuts? Crab sticks? A fucking SWIM!?

Blood Red Shoes: Rather than 'growing balls', can't-believe-they're-only-a-twosome Steve & Laura-Mary have evolved into the sound of a grunged-up helicopter taking off. Herculean noise roars from the guitars. The drums clatter like rubble falling rhythmically into the cogs of a Power Ranger. Meanwhile, the boy-girl vocals still criss-cross from cute to puke atop their riot-grrl via post-Blur-Blur party anthems.

Let's Buy Happiness: Cocteau Twins comparisons may piss this band off more than most but their songs that soar on a jagged bed of post-rock (or possibly post-hardcore or maybe math-rock) marinated guitars and biiiig soppy choruses, may find them being dogged with the 'new Coldplay' albatross. Certainly not dross, in fact, possibly one of the most thrilling new bands I've seen in years.

Polar Bear: The decision to skip the sonic assault of Rolo Tomassi (seen them twice already this year likes) for one of the greatest drummers of all time, was rewarded not only with the sight of the finest jew-fro in existence but by one of the most mind-agitating sets I've seen for quite some time. One guy was simply alternating between some kind of Wii theremin and deflating a balloon. Just don't call it spazzy-Jazz.

Guest-houses in Brighton: The fact that mine had a b+w cat with a cow pattern and left out banana bread for, er, supper:

The Ruby Suns/Here We Go Magic/Japandroids: All having technical difficulties and playing criminally short sets.

The Walkmen/Villagers: Being unable to make it.

Broken Social Scene/Surfer Blood: The Queue and the not seeing either of them because of The Queue. Pulled Apart By Horses: If there is a more excitable, energetic and downright demented outfit in Britain at this moment in time I've yet to see them. Even in the distant outpost that is Concorde 2 they managed to attract a healthy crowd and slay each and every one of them single-handedly in little over twenty minutes.

The Big Pink: Derided as they might be by many, on their day they're one of the most ferocious, nerve-shredding bands around and thankfully Saturday at the Great Escape was one of them. Even if half the audience had only come to hear one song, that didn't stop Digital's dancefloor from becoming a heaving, sweaty mess long before 'Dominos' arrival.

The Fiery Furnaces: That they were my see-them-because-they're-sandwiched-in-between-two-must-sees (Dead Confederate & Wild Beasts incidentally) of the weekend probably wouldn't account for much had they not been so damn fantastic. Having never really got to grips with their recorded output beforehand, I can honestly say Eleanor Friedberger and co.'s captivating performance ensured my first waking hour the following morning was spent purchasing I'm Going Away. Yes, that good.

The Industry Pop Quiz: Still in a daze from the previous night's excess, Friday afternoon's pop quiz with David Quantick seemed like the perfect hangover cure. We may have only come 6th, but no one else got Barney Bubbles right in the picture quiz!

All you can eat restaurants: Dozens of them. All offering everything from Chinese, pizza and even Mongolian delicacies for a fiver or less. Bargain.

The Cribs: Forgive me for missing the point with these but I've never quite understood how even after four albums, their tiresome ladrock isn't quantified with the other incumbents of said genre like The Enemy, Kasabian or The Courteeners, and nothing here changes that opinion.

Band clashes: So, so many, particularly on the Thursday night. It was like sticking a needle in a haystack and coming up with Gaggle.

Queues: I guess we're all going to mention those queues, even though ticket sales were down on last year so I'm told. This meant Saturday night's live music action was cut short at approximately 10:45pm. Thank heavens for the Queen's Hotel bar. Warpaint: Adored by Hollywood types and featuring Hollywood types, Warpaint were a whole wash of hypnotic LA lusciousness. Their Frusciante-produced EP has gotten a resounding thumbs up, and they're rumoured to be back in town in Autumn.

Team Ghost: Darkly emotive, no-nonsense rock from ex-M83 chap with plenty of NIN, Death in Vegas and My Bloody Valentine going on. Their drunk French buddies dressed as the Police badgering the NME made for an amusing sideshow.

Summer Camp: Was I alone in hoping Summer Camp looked like that blogged-up video of theirs? Their airy twee pop (twop) was a welcome respite after the fugged up amps and sweaty air of elsewhere.

Japandroids: Finishing with a third-choice amp, definition was hard to pick out even by J'droids shambolic standards. Better (apparently) in the second show of the w'end. Kamp!: Big in Eastern Europe and soon to tour in China, these unknowns turned the room into a kind of camp John Hughes trip. Trans AM humour, Pet Shop Boys stories - if you can get over your own pretensions they aren't bad at all.

Best Coast: Slacker rock with a Californian surf twist. Who ever thought Swervedriver and the Beach Boys would make amicable bedfellows? Needless to say, probably not for everyone.

Cold Cave: The loudest gang of hoodlums all weekend. Morbid disco with an all manner of meaty smatterings, up to and including detroit house-isms. Ear-plugs here had all the effectiveness of a life jacket in a tsunami.

Ade Dovey thank you for helping to jog my memory on some of the above.

That's your lot. See you in Brighton, same time next year?

DiScuss: We've shown you ours, what were your highs and lows?

In Photos: DrownedinSound presents A ...