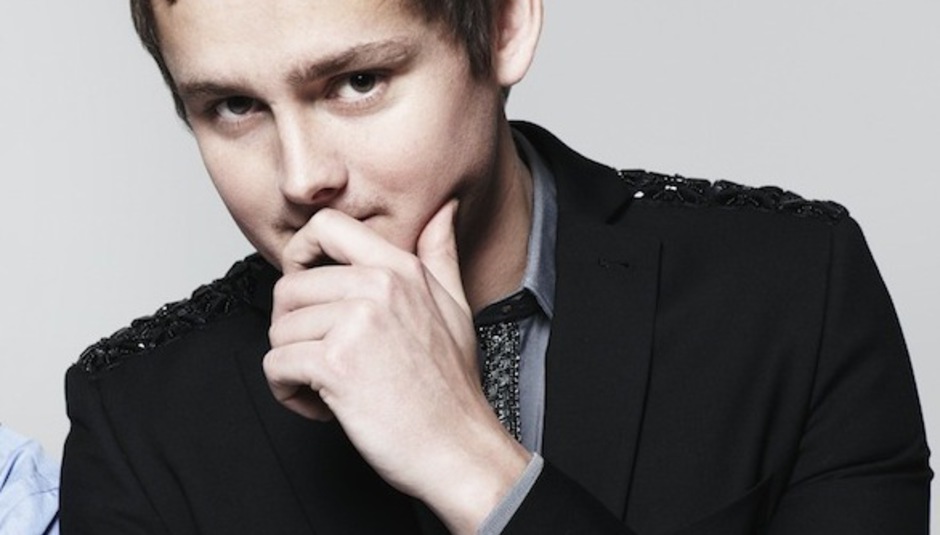 This week I am fairly sure there is something for everyone. Even if you don't like Xenomania at their most shiny, or insanely pretty indie pop, or singles that wouldn't sound out of place at Wigan Casino (even though they come from Tel Aviv).

Also, someone, somewhere, is going to really regret giving me access to high res, press-only images of Tom Out Of Keane.

Princeton - ‘Shout It Out’ (Kanine) Princeton have been here before, and perhaps this squashed bit at the top of the page is already a bit old and whatever and yawn to them. But in a week as good as this one, I really do do a properly pained hover when I glance down the playlist; it really is a Wendy's Choice. And 'Shout It Out' is uncommonly deserving, being about wanting to bellow your love from the highest rooftops and not being embarrassed, even when everyone asks you to put it away. And though I find this shouting bittersweet ['Who will buy MY matches?' trilled the little Dickensian orphan; and 'Who will shout of ME?' wailed the oiky div with a licence to splurge] this really is of no concern; ‘Shout It Out’ sounds like unheard Orange Juice. Now happily, for once I happen to be young enough to have not 'done' OJ first time round, and perhaps this is why I like Princeton as much as I very do.

Given that it is bad form to not give at least some hint as to how it sounds, let me tell you how 'Shout It Out' is blessed with quivery strings, an officially glorious middle eight, a muffled bass drum, handclaps, tinny tambourines, and lyrics about discos where boys stand at one side and girls on the other. And kindness; it’s got heaps and heaps of that. Essentially it's just about perfect, so do keep everything crossed, really hard for the halbum. Listen here. Northern Soul from Tel Aviv with 234 MySpace plays isn’t what one usually expects to find in one’s singles selection box. Neither are promos from Acid Jazz, which is why I risk unveiling some rank snobbery by admitting that upon spying their famous logo, I immediately remembered Galliano and pretty much wanted to top myself, whether I could see the wood for the bloody trees (uh-uh-uh) or not. Naturally, when I realised what an ENORMOUS ARSE I was being, I made myself give ‘Man Of North Country’ a whirl - which, of course, is when I realised it shared an opening melody with ‘Kids In America’ before it goes all ‘You Can’t Hurry Love’ and ‘The Night’ ALLATONCE and BOWF TOGEVA. I mean, real, honest ['real', 'honest' - no Wendy, nooooooo] genre music of this sort hardly ever gets much of a look-in, so let's have a change; we might actually enjoy ourselves. I mean, if you stand on the sidelines when this comes on, don't be surprised if someone shimmies over and - though grinning - calls you a joyless berk. And you don't want that, do you? Listen here It would be deeply disingenuous for me to ignore how for some people, Keane are icky as hairs on a soap bar (and that is literally one of my Top Five Icks). But I am not one of those people. Instead, Tom & The Other Ones seem capable of inducing in me an indecent and instant sort of euphoria. Now, I take such joy-makers where and how I find them - which is to say, with glee - mainly because there are almost never enough such things to go around these days; I ask no questions, especially when it is something as undangerous as pop music. Worse still, I really do think I could write a Greer-style book on young men with Chaplin’s bewilderingly boyish beauty - even though I know it would be philosophically and academically half-cocked, before finally showing its true colours, which I will have personally selected from the Pantone Rainbow of Perv. So while I consign that ‘idea’ to my (very dark, but wildly populous) locker of unwritten leaflets, let me just say how I think ‘Stop For A Minute’ is two hundred and twenty one seconds of bliss. Although WARNING: At one point Tom actually sings ‘Sometimes I feel like a little lost child’, and I can't tell you what I thought in response. Watch here.

I really, really want Mini Viva to be absolutely massive, even though this has some very dread lyrics in which we are induced to try their ‘candy’ and worship with them at the altar of ‘fashion’, fame and ‘status’. Mainly because ‘One Touch’ has a chorus that is undeniable; a Catholic Pope of a whooshing melody that reminds you just how unnaturally gifted Brian'n'Miranda are. To listen to it is to be reminded of Girls Aloud when they were still (woe) a Real Five and not wasting their preciouses opening theme pubs; they had better things to do, things like ‘Close To Love’. See, ‘One Touch’ is just really, really, really brilliant; I can’t be bothered to describe it any other way. You know, in one of my (many) shoeboxes of tat, tickets and forgotten dweams, there is a cassette tape of me and my sister listening to the charts. And there is this bit I remember, where you can hear me - fit-to-burst - go ‘Oh! OH! I LOVE THIS ONE!’. That is how I feel about ‘One Touch’.

Shall we have a theory? It’s just that what really struck me when I first heard I Speak Because I Can, was Marling’s strange, deliberate pronunciation. I mean, that and all the wise yearn, obviously, but by now I sort of take the Wise Yearn as red, even if that is essentially quite spoilt. Here, on ‘Rambling Man’, it is as if she has wanged in loads of heggstra haitches. And though the lyric is ‘too weak to be led’, she seems to sing ‘too weak to be le-hed’. And then 'rambling' is more ‘rahambling’. And ‘dead’ is ‘dehed’. You get the idea, and maybe there’s something about superfluous haitches that pushes a button somewhere - maybe that’s why I will insist on using them like a textual tick [because let’s just bring this back to being about me]. Of course, there’s also the bit at about 2:10 in, where the song charges into being and you get goose bumps. And the fact that she’s mining a lyrical trough that seems strangely timeless. I just basically love her, see, and even when I am SICK OF BLOODY FOLK, there is Laura, rising above all the strum as if she invented it. Also, that bit where she sings ‘It’s hard to accept yourself, as someone you don’t desire’ is a bit of a floorer, ain't it? Wicked, wicked, woman.

Symbolism fans will spot how 'Promises' is about growing up too fast, because the video is a bit Bonnie & Clyde gone CBeebies; it has chirren with guns. And even though that is about a twenty on the Scale of Do You See it don't matter, because The Morning Benders remind me a bit of Hal (what I LOVED) and they are wonderfully shuffly and shambling and scuffy and maybe even a bit funk, imagine that. In the end though, it is really all just a prelude for the escalating middle eight - where 'Promises' does that thing that's essentially the musical equivalent of very high stairs; up a key, up another, you feel gorgeously dizzy. If this single was a pair of jeans it'd have a holey, frayed overhang on the back of its trainaz. Which makes it quite charming.

I’m not quite as taken with this as I was with ‘Drop The Other’, but ‘Double Edge’ still has enough of Emika’s own brand of watery doom to make a girl want to keep her ear out. Sadly the video screams BOUTIQUE GALLERY VIDEO INSTALLATION - so shut your eyes while I look after your bag. I will totally still be here when you open them again, promise. And I will absolutely not have been last seen disappearing into Threshers, clutching your credit cards and smacking my lips.

Blood Red Shoes latest is very urgent and very yelp, though it would be nothing without lovely Laura-Mary Carter's vocals. Because on the choruses she channels a whine as delightful as her enviably yummy hair - and I say that even though I am fully aware that talking about a lady singer's hair is not really allowed, fair or strictly necessary. It is really very nice though.

The first thing ‘You’ put me in mind of, was that bit in Ferris Bueller in the gallery. You know the bit, it’s when they zoom into the Seurat againandagain until you can see not just the dots that make up the picture, but the hactual nubs and bobbles of the canvas; it’s almost a zoom too far. ‘You’ you see, is like that moment but with sound, and it’s as if Gold Panda had taken his idea and then dived right into the tiniest part of it. But also shrunken himself at the same time, so everything suddenly feels quite massive. And though I realise what I am writing here is unsplanation of the worst kind, it is what I thought. It’s as if he’s made all the notes absolutely huge, and we're at their feet being towered over; mildly unsettled. What we have here is one - perhaps two - bars of Indian music, endlessly being fiddled with. And to make that interesting or pleasurable strikes me as supremely clever, so well done him.

I am not sure if you have noticed, but it is quite odd how, when someone has a very posturing vocal style, they almost always include loads of uh-oh’s in their songs. And the thing is, usually I have nul time for posturing, I make scant and scarce exceptions (Nic Offer, this means you). So yet again, here is Dev with a performance overflowing with arch, you can hear him swinging his matinee idol mic around and raising his eyebrows and being all I Am A Theatric. And you don’t mind at all, he has aced it again. Love him, love his hankering, heartbreaky minor key songs about romantic disaster.

The Cairo Gang - ‘Holy Clover’ (Tin Angel)
Yes, ‘Holy Clover’ is horizontal, blissed out and psychedelic. But it's not so fuggy you want to give it a slap or lecture it about Straight Edge. More here.

Monarchy - ‘The Phoenix Alive’ (This Is London)
Shimmery synth pop. Even if ‘shimmery synth pop’ are three words that have been so entirely devalued, they might as well be pebbles. More here.

Wendy is on Twitter, here. Don't try and talk her out of it because she won't listen, LALALALALALALALA.