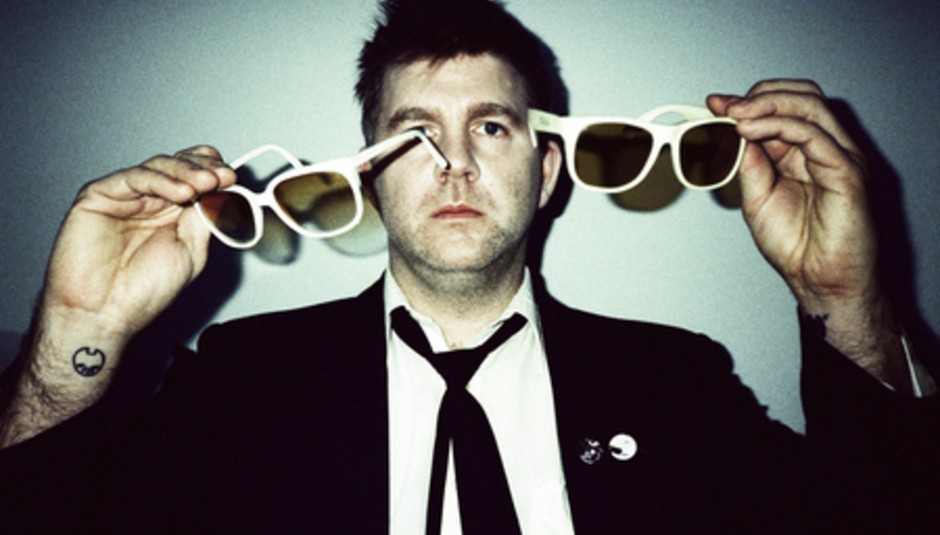 Just over three years after their magnificent second LP, Sound of Silver, LCD Soundsystem return with their as yet untitled third and, if recent statements by bandleader James Murphy are to be believed, final album.

It was recorded at LA mansion The Manshun (did we mention it was a mansion?), with everyone involved helping to generate a kind of freaky cult vibe by dressing in white, travelling and partying around the city en masse, and generally tearing it up. But not killing people in their homes. So the record company gave it to us, and we listened to it.

"Everyone's getting younger/It's the end of an era it's true."

If this, the as yet untitled third full-length from LCD Soundsystem, really does turn out to be their last, they'll leave behind a trilogy of albums that all have barnstorming opening tracks. At the outset of 'Dance Yrself Clean' a light, rattling drum pattern is punctuated with - what else? - a cowbell before being joined by synthesized major chords, huge but calm, like the breathing of a slumbering giant. "Walking up to me expecting/Walking up to me expecting words/Happens all the time" Murphy sings to his unknown interlocutor, sounding sweetly resigned. The vocal melody is naive, with a delicate 8-bit counter-melody forming curlicues around it, and sounds kind of like They Might Be Giants as sung by Kermit. Believe it or not, I mean that as a good thing.

Then, at around the three-minute mark of this nine-minute song, a staccato drum machine burst triggers a sturdy breakbeat and those respiratory synths rear up into gigantic blocks of sound, their swelling arpeggios providing the structure from which Murphy exhorts: "Break me into bigger pieces/So some of me is home with you/Wait until the weekend/And we can make our bad dreams come true". Lyrically he seems to be touching on the same territory of 'All My Friends': the narrator's impulse for hedonism is shaded by the awareness that he's too old for this shit. Vocally, by the track's peak Murphy's hitting a strangled falsetto reminiscent of a more muscular Robert Smith. Are there really eight more of these? Brilliant.

A short glam stomp with some distinctly Ziggy-era Bowie-style harmonising taking it into the chorus, 'Drunk Girls' is the only song on here that isn't in the six to nine minute bracket. The deliberate single, in other words, which probably explains the knowing obnoxiousness of the lyrics. Arriving on the heels of 'Dance Yrself Clean' it feels a little throwaway on the first go round, but it's got enough swagger about it to suggest potential as a grower. At the very least you can pogo to it drunk and repent at your hungover leisure.

A flattened metallic break and some percolating modular synth bloops deepen into a menacing techno throb for the lengthy opening period of 'One Touch'. It's a little like 'Too Much Love' in a much meaner mood, with the glassy-eyed female vocalist of Sound of Silver's 'Us v Them' echoing the titular refrain, 'One touch is never enough' over a restlessly worming bleep melody.

The first thing you'll notice about 'All I Want', after the springy backbeat and desultory chords of its meandering intro, is a strained, sustained guitar sound that picks off right where David Bowie's 'Heroes' left off. Murphy even hits a note proximate to Ziggy's opening 'I' before peeling away into his own space. But what kind of space is this? Is he really singing, in the midst of this 70s rock breeziness "All I want is your pity/All I want is your panties"? I'm pretty sure I'm wrong, and what I really need is my ears syringed and a good analyst.

Anyway, elsewhere the song contains the wonderfully cynical line "I've never needed anyone for so long". The increasingly squalling, effects-slathered guitar, aping the sound of that on Brian Eno's 'St Elmo's Fire', seems to underline the disturbance lying at the core of this outwardly sweet-natured song, as does the metamorphosis of Murphy's vocal from a smooth beginning to disconcertingly Bono-like bellowing at the end.

Hurrying away from the (possible) smalls fetish and the Irish rock-pope, 'Change' runs on a warm, wobbling mid-tempo electro pulse. There's a Kraftwerk via Human League feel to the synth stabs and shimmering pads that periodically slice through Murphy's heartfelt vocal: 'I can change, I can change, I can change/If it helps you fall in love'. Six minutes rush past in what feels like half the time.

At a little over nine minutes 'Hit' is the longest track here, although nearly a third of its length is taken up with a meandering electro-boogie intro. It turns out that's a deliberate ploy, however, as 'Hit' is by some way LCD Soundsystem's most self-reflexive song to date. Coming from a band that gave us 'Losing My Edge' and 'North American Scum', that's no light claim.

Nestled in a discoid rhythm guitar strum and drums of Tango in the Night crispness, 'Hit's vocal is a (very) long fuck you to the band's record label (presumably we're talking about their US label Capitol; I don't think EMI could bear another Radiohead-style kicking right now): "You wanted the hit/But maybe we don't do hits/I try and try it ends up/feeling kind of wrong..."

Elsewhere the lyric indulges in the age-old rock faux pas of describing the drudgery of touring, which is the surest sign yet that, unthinkable as it seemed to me just a couple of hours ago, this really might be a project that's running out of ideas. As mentioned above, LCD have done self-reference before with great wit and acumen, but unless there's a meta level of irony that I'm not getting (and even if that were the case, who needs a nine minute chin-stroker of a 'gag' in the middle of an album?), this is an uncharacteristically po-faced moan. It was boring when Pink Floyd did it with 'Have a Cigar' in 1975, and it's boring now.

"We have a black president and you do not, so shut up."

This one leaves me kind of torn. On the one hand it sounds great. But then so does Iggy Pop's 'Nightclubbing', which this basically is. Although 'Nightclubbing' didn't have a trumpet, and its lyrics mentioned texting less. In fairness, it's really just the beat pattern that makes it sound like 'Nightclubbing'. And those sickly coloured, buzzing tones pushed high in the mix, like sonic vomit. And the piano. And the 'I am speaking to you from behind a very high, very thick wall made of heroin' vocal delivery. But even if the 'Somebody' calling is probably Iggy wanting his and Bowie's song back, there's still an appealingly queasy luridness to this. A classy pastiche.

If, when you look back along its length, much of untitled really is an LA album, equal parts glamour, anger, optimism and solipsism, 'What You Need' is the sound of the band breaking north on the Pacific Coast Highway and getting the wind in their hair. "Home" Murphy intones over a Reichian synth line. It's a sweet note to end on, the lyric again circling the questions about aging, regret, and the doubtful wisdom of employing hedonism as a tool to improve the situation, that have become LCD's abiding intellectual concerns. Marrying melancholy with a qualified sort of uplift, the track comes to develop a propulsive kosmische thrust abetted by - what else? - cowbells.

I don't know what went down at the Manshun, but this still-untitled LP feels like it was created in the sort of hothouse atmosphere that promotes hubris as well as inspiration. I hoped against hope, but it was always unlikely that it would better Sound of Silver, which is among the best albums of the past decade. Spotting all the 70s references is fun enough, although I imagine that's a game that'll get tired pretty fast, but having the deeply unlovable 'Hit' as its centrepiece is a problem that, for me, makes this the least satisfying LCD album by some distance.

There remains some really good music here, though: 'Dance Yrself Clean' and 'Pow Pow' in particular already feel like essential additions to LCD's oeuvre, and there's a chance I might be thinking of 'good' tracks like 'Change' and 'What You Need' as great ones a few listens from now. But that's a consideration for on down the line.