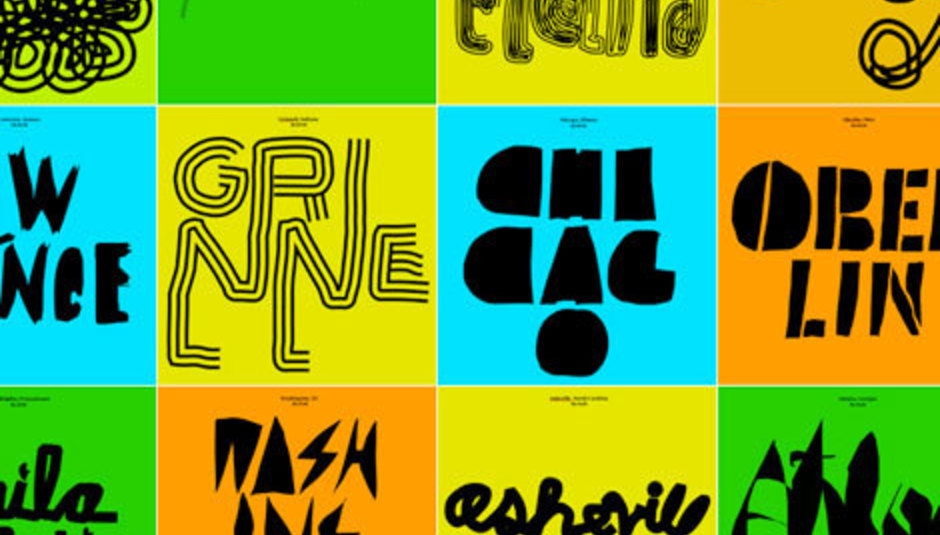 DiS's Liars week commences with sticksman Julian Goss bucking all manner of drummer clichés by having words with designer Brian Roettinger, who collaborated with the band on numerous occasions, most recently for the artwork to super duper new album Sisterworld.

JULIAN: You do a lot of packaging for bands, how does the collaboration process work?

BRIAN: Depending on the label or band it's usually different. With you guys (Liars) and No Age its very collaborative in that we generally discuss the record and let a handful of ideas linger for awhile — months before any deadline and before any designing really begins. These early discussions give me a good understanding for how or what the packaging can be. No matter how collaborative it is for me it's always very important to share my personal opinion and bring my personal point of view to the record. In the case of Sisterworld, Angus and I sat and spoke strictly about Los Angeles and the idea of alternate spaces, especially in a large city like Los Angeles, spaces in which you carve out your own identity, spaces that ideally create who you are and your relationship to your city.

JG: How do you feel about the standardized jewel case?

BR: Lately it's usually a deal breaker for me when it comes to having to design an album. I never feel comfortable with them. I embrace working within certain limitations, but feel the jewel case has destroyed any intimate experience music packaging can provide. For me, the excitement when getting a new album is as much about the packaging as it is the music. They equally must evoke memories. Obviously with digital technology and the MP3 generation this is a lost feeling. I feel guilty if I'm responsible for the production of 10,000 or however many more jewel cases. I don't like the way they look, feel and waste material and space.

JG: Oh yeah, when I was buying records when I was young and in the record shop I’d see a record I wanted, I wouldn’t open it up or go through it there at all.

BR: Yes it's very ritualistic, I always wait until I get home.

JG: Just put it in my bag and not look at it again until I got home, to my perfect place and put on side A and slowly go through all the packaging while listening to it.

BR: Yeah, it's about that intimate experience of listening to music. The relationship between the visuals and the music. There is always something the packaging can tell you that the music cant, and vice versa.

JG: The other day I was listening to James Brown In The Jungle Groove on vinyl and on the back cover there was a story about Bootsy Collins playing in the band, in his own words, there on the back cover. He tells a story on how he took LSD during one of the shows and while he was tripping his bass turned into a snake. He freaked out and left the stage and continues to say something like… "that was the last show I played with James, cause we all know James don’t play that." All of sudden I felt way more connected to this record. Like I had some inside scoop. To any James Brown fan I think this is lost information. Do you think that has a anything to do with MP3s vs. physical copies of albums anymore? Album art, to me, has struggled ever since the introduction to the cd as a package.

BR: It partly does. The avid music buyer nowadays seems less curious about the music or bands they prefer to listen to. It sounds nostalgic but the days of searching for new bands is over. Everything is right in front of me - I no longer need to search. Album covers keep dwindling. We went from a 12-inch record to a 5-inch CD now down to a 2-inch square on iTunes. The image that represents an album cover is slowly shrinking and will eventually be gone and morph into something else such as a video or some other form of a digital experience.

JG: Speaking of iPod and iTunes, they omit all the other art outside the tiny cover image.

BR: The idea of digital album covers are a completely uninteresting idea — at least for me. Your visual language is diminished when you're working within the confines of a 2 x 2 or smaller square. That's why the album cover will perhaps one day be something other then a "cover". Even though people purchase less music then the pre-iPod days. I feel by giving them something that is inventive, or something that feels special or creates that intimate experience we spoke of, that they will begin to purchase music again. You can't download great packaging… yet.

JG: I agree, the future of music in a packaging way is gonna be moving away from any kind of actual recorded material. Not so much LPs, I think they will outlive CDs but if your band is called 'Mattress Assassin' you buy a Pillow and that comes with a simple CD or download code. Where the music you just have on your computer and players but the purchase is about the object you get.

BR: Yes, like the packaging for David Byrne/Brian Eno Everything That Happens, Will Happen Today. So there is the regular jewel case CD and then there is a deluxe three-dimensional rendition of the cover. "The deluxe package comes in a tin with a microchip that plays a sound of someone walking down a hallway in the house and slamming a door when the package is opened." The packaging evokes a memory and idea and an experience. Something like this does not exist on a CD rack, this sits on your mantle.

JG: Is there an important rule to always remember or think about when designing?

BR: Think openly. At first don't worry if something is "the right thing". It must be something you want to keep looking at and it must always communicate and evoke an idea or memory.

JG: If professional design was considered illegal and they chop off your hands if you practice design, what profession would you do?

JG: Loss of sight? Loss of hearing? Loss of taste? Loss of love? - Which one if you had to take one?

BR: Loss of taste, sight, hearing, and love are too important to continue in living without.

Today is Brian’s birthday and we are now starting to prepare a vegan dinner for a small group of friends. I am on Kale duty and Brian is rolling out some pizza dough. Zen Sekizawa, Brian’s girlfriend and amazing photographer (who has not only taken all our press and album photos for this record but has taken thousands of others, most recently including Ray Bradbury, which is pretty exciting I think). Zen has just brought more food to prepare...

JG: Is there any similarity to food and design?

BR: Just like food, there is good and there is bad. I've been pretty lucky to work with great clients and projects that to me matter as well as increase my level of satisfaction. Design needs to satisfy just like food.

Zen: How long is this interview gonna happen for? Cause we have some serious cooking to do!

Aaron from Liars: The Sisterworld Ske...