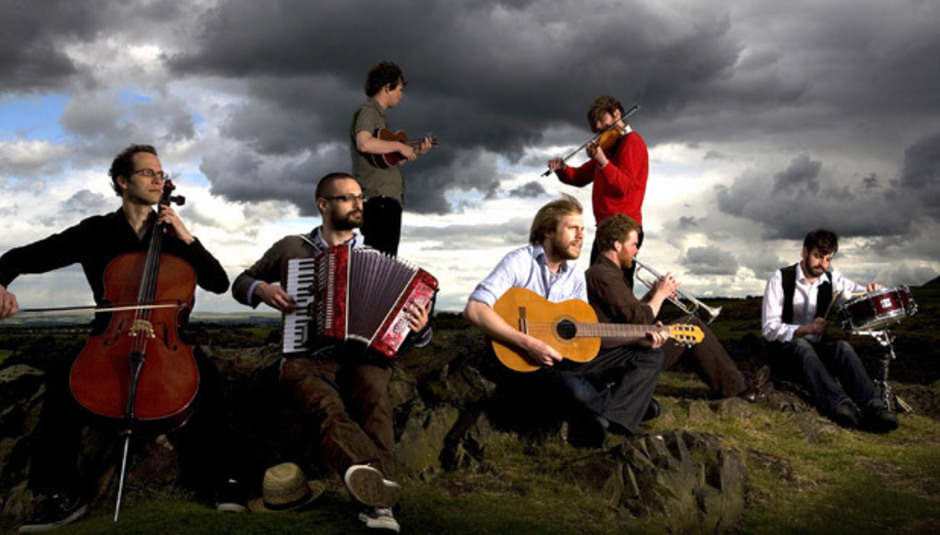 Our first local scene report, gig guide and DiScover mixtape of bands to check out from our DiSser in Edinburgh...

Edinburgh may be the capital of Scotland, but it's not even in the top ten of UK cities listed by population, once you take the surrounding suburbs into account. Then there's the Edinburgh Festival, which sounds like a great idea but basically swamps all local arts in a gigantic tsunami of imported nonsense, all whoring for attention and guzzling arts funding and awful beer and generally obliterating anything local which may be trying its best to happen on its own - at least in the low arts anyway, which is generally what interests me. The size of the tourist industry in Edinburgh is bad enough already, driving up the rents on city centre property to the extent that anyone peddling anything other than rugby shirts and tartan shortbread set to a cacophonous background of bagpipe techno simply cannot compete.

All this makes it all the more impressive that over the last few years or so, a creative, unusual and stubborn-as-fuck alternative music scene has begun to thrive in the city. You may have heard of the odd standout band who made it into Q or the NME (the likes of Aberfeldy and Idlewild for example), but the last time the city was buzzing as much as it is now was back in the Postcard days of Josef K, The Shop Assistants and The Fire Engines - back when the very concept of indie music was being invented.

In my own version of the story, it all started when I moved back to Scotland to marry my high school sweetheart (sort of) in 2005. At that point I kept going through to Glasgow to see gigs at places like King Tut's and Nice 'n' Sleazy's, but I slowly became aware of small scale promoters in Edinburgh working their tits off to bring the best bands through to a city which was, frankly, on absolutely no-one's tour itinerary at the time. If you wanted cutting edge indie rock, the I Fly Spitfires lads were your best bet, and if it was something a little odder then you could look no further than the wonderful Tracer Trails. Both of these enterprises may have more or less expired by now, but they were inspirational - they showed people that you could bring incredible bands to Edinburgh and, more importantly, they showed local bands that they were good enough to share a stage with the most exciting and the most interesting musicians around.

Although Tracer Trails are showing promising signs of emerging from mothballs, both they and I Fly Spitfires pretty much packed it in just as the rewards of their determination were becoming apparent. However, the likes of the dogged Trampoline, the enigmatic Gentle Invasion, the ambitious Versus and the brilliant Nick from Sneaky Pete's, as well as the brief but dearly appreciated existence of the Bowery, have ensured that their dedication has has found worthy heirs.

Broken Records may have been the first band to make a big impact on Drowned in Sound when they emerged, but groups like FOUND have been ploughing their own eccentric, fascinating furrow for years before that, and there has been a real wave of superb music in their wake, to the extent that even obvious music loci like Glasgow have been comprehensively eclipsed in the last few years.

Last year Broken Records, Meursault, Withered Hand and FOUND announced to the rest of the country that our city actually exists, FOUND with a BAFTA and the others with their debut albums. None of it has been Top of the Pops or Jools Holland stuff, but then, that's not what Edinburgh does, really. A couple of the proudest recent press reviews have been the "snobby art school jazz pish" awarded to Enfant Bastard by the NME and the "unlistenable rubbish" which Paul Vickers & the Leg recently achieved in Q. Funnily enough, pride in this sort of dazed incomprehension actually makes it quite tough for bands like the Fence Collective's excellent Kid Canaveral to get the appreciation they deserve at home; they're an Edinburgh band, but they play indie pop which is catchy, bouncy and infectious as hell, and that isn't quite as popular around here as it should be.

Given I only have even the vaguest shred of credibility because I write the music blog Song, by Toad, I guess I'm biased but I think the internet deserves a lot of credit for what is happening in Edinburgh at the moment. In places like Glasgow, Manchester and London where a lot of like-minded people gather together geographically, forming mutually supportive communities happens fairly naturally. Terms like 'mutually-supportive communities' may sound like hippy shit, I know, but these are the people around you who come down to the pub with you and keep reassuring you that 'it can be done'. That's important in music, and in places like Edinburgh, Aberdeen, Bristol, Norwich... anywhere small, any means to bind this kind of community together is crucial.

In Edinburgh, there has been the recent rise of blogs such as my own, 17 Seconds, The Steinberg Principle and Scottish Friction to give people a place to argue, as well as enterprises like Off the Beaten Tracks and the Toad Sessions which bring Edinburgh to the attention of the wider music community. It's not just that though. Services like Wordpress and Flickr allow talented photographers like Nic Rue, Markus Thorsen and Dylan Matthews to make their contribution, and that may sound trivial, but when there's not that many of you, believe me, having this kind of glue to hold you all together is absolutely crucial.

It's not just holding your own community together that's important, either. It's connecting you to the outside world. The UK print media may still be woefully London-centric, and the Scottish print media equally myopic about Glasgow, but as online amateurs come to dominate conversations about music these biases seem to be vanishing, and I cannot emphasise how beneficial this is for grass-roots music. Bloggers and podcasters, promoters and bands nominally based in Edinburgh are now in touch with their enthusiastic Glaswegian counterparts, like The Pop Cop, The Vinyl Villain and PodCART . I have bands from Portland and Montreal on my label, and our most enthusiastic supporters are the likes of Vic Galloway (just down the road), Said the Gramophone (Montreal), Gideon Coe (6Music - London, I guess), Slowcoustic (Vancouver), The Blue Walrus and The Daily Growl (London), and Knox Road (Boston). We even had the team from They Shoot Music, who are based in Vienna, stay with us recently because they wanted to investigate Scottish music - are you telling me any of this would be possible without the internet? Would it bollocks.

So, after something of an explosion in the Edinburgh music scene over the last year or so, at the moment the whole city seems to be holding its breath somewhat. More or less everyone is recording an album at the moment. Broken Records have their second coming out on 4AD in the Autumn; eagleowl's gorgeous Sleep the Winter is already available on Kilter; Meursault's second full length is available to pre-order from Song, by Toad Records; King Creosote, Meursault and Animal Magic Tricks have a collaborative album available on vinyl until its general release in June; Conquering Animal Sound have been signed to the excellent Leeds-based Gizeh Records, home of Trespassers William and Glissando; bands like The Last Battle are talking to Island; FOUND are rumoured to be the subject of something of a tug of love between Fence Records and Domino; and on it goes. Withered Hand's wonderful debut album Good News sold out so fast SL Records barely knew what to do, and we're in the same situation ourselves with Meursault's Pissing on Bonfires/Kissing With Tongues. Basically, it's as exciting as hell at the moment, and by the end of the year this city could burst the shelves at Avalanche Records, the city centre music shop which puts such a lot of effort into supporting local bands.

I get all excited like this, though, and then have to remind myself: it's not just the music around here which is a little sensitive, it's the scene itself. It's a fairly delicate, fragile thing, because Edinburgh is a small city and there is a relatively small number of people keeping the current boom afloat, and their continued energy can't be depended upon. This is exhausting stuff, truth be told. Since the demise of The Bowery and the sudden hush at Henry's Cellar Bar, we've been really short of good promoters in Edinburgh. I mentioned some of the good ones above, but they don't wield massive budgets, and if you're a medium-sized band looking to come and play here there aren't that many places which can guarantee you a good fee. This environment leads to the kind of doggedness required to work in music around here and perhaps explains why there aren't a lot of pop bands from this city. It's an odd situation, because it means you have to be determined as hell, but it's probably also one of the key reasons why this is one of the most supportive and cooperative groups of people I have ever been part of.

I don't shake sticks, generally, but if I did there would be more good music around here at the moment than I could possibly shake one at. Just as a taster, here are some bits and pieces:

You can preview the whole album on their Bandcamp page, and I promise you, it's fucking brilliant.