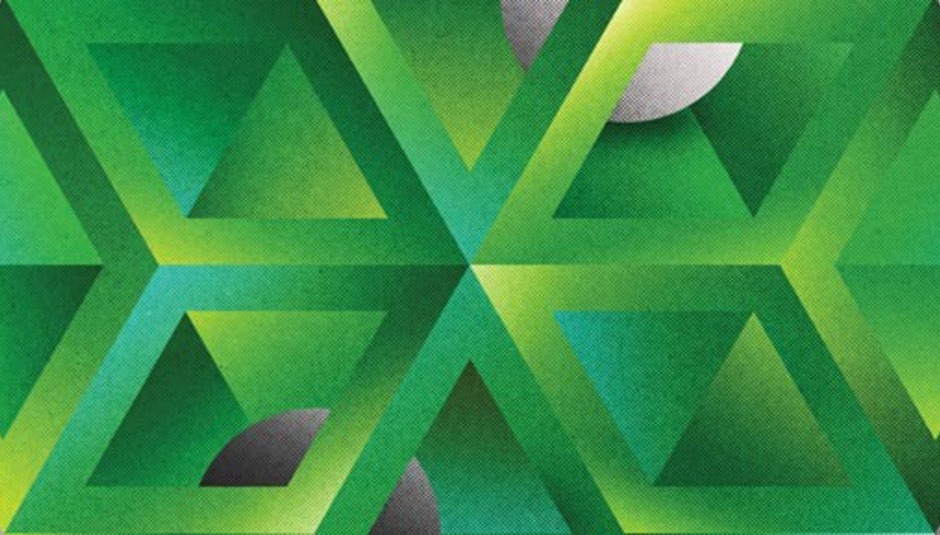 This week: a cheap joke at the expense of The Courteeners, some MZN Dram Rock from Muse (or, as my Mum says, 'Moo') and heaps of wondair plastic loveliness from Tunng, The Witch & The Robot and Yeti Lane.

Not the Queen one, nor the Moonlight Sonata one, nor the Theme from Carrie one, nor the Rufus Wainwright, here-I-am-camping-it-up-as-a-Fronch one. I mean, how it is that Matt Bellamy avoided being slapped with a hundred cease-and-desist orders upon the release of The Resistance is a thing that vexes me almost daily [let's face it, I've got too much time on my hands.] Anyway, this is Muse being Muse - a side to them I am marginally less interested in - despite the fact that I have spent the last month getting properly obsessed / ranting expansively and flagrantly about them to anyone within jabbing distance [you might want to take a moment > here < to congratulate yourself for having escaped this, and also perhaps spare a thought for my 'friends'.] See, I have cottoned on to their sheer, unstinting and unembarrassable, melo-magnificence precisely ten years - or, 100 million internet light years after everyone else. [In the same way that there is one dog year to seven human ones, the scientific formula for internet time is one real year to 100 million web ones, and do congratulate me for just having worked this out.] So while you gloss over how an inability to spot 'good' 'bands' might make me curiously unreliable slash unqualified for writing a column about singles – especially as a good deal of them are debut ones, I will tell you how ‘Resistance’ is about STICKING IT TO THE MAN WITH BELLS ON - just like every other Muse song - and it is all-out, utter skillz from start to finish. My excuse, in case you are wondering, is that a youngling once told me how Origin of Symmetry was the best album since Brothers In (bloody) Arms, and I am sure you will not begrudge how that might have put me off Moo, just a little bit. Video here

Chiddy Bang – ‘The Opposite Of Adults’ EP (Regal)

‘I’m never growing up,’ sing Chiddy Bang. And well they might, with a song as daftly summery and day-glo as this one. You know, they really do begin this single with the found sounds of a playground [are the Go! Team kicking themselves right about now, I am starting to think of them as the old-school revivalists who came that little bit too early for the party and left thinking it were crap. And also that they are partly responsible for the pop-hop that is flooding our charts. This is a theory that needs some work though, and I have the Olympic ice-skating to be gawping and - OH YES - crying at]. And though ‘The Opposite of Adults’ is all rather pleasant, one cannot help but feel that any song about adultescents [I WILL NEVER USE THAT WORD AGAIN AS LONG AS I LIVE] really do not need more encouraging vis a vis not growing up. I mean, as if it was not already bad enough that there is a whole generation of genuine grown ups (myself included, for all the shame in the universe), who appear to have been given tacit permission to carry on romanticizing and co-conspiring in the inappropriate and rank elevation of the pop culture of their teens, we now have pop songs that make it seem alright. And that is why I shall not be listening to ‘The Opposite Of Adults’ again, much less perusing the kiddiewink section of H&M in search of a Yoda hoodie, as if to perform some sort of reverse-paedo on my own, actual person. More, including a free download, here.

Frightened Rabbit are under the impression that getting over someone is like having a tumour recede. And though this lyrical flight of fancy does not bear up to really close, HD scrutiny - their central tenet, that ‘there is nothing like someone new’ / ‘And this girl, she was nothing like you’ is worth having a little pootle around. So let us look at how well it is mortared and upheld, see if they have used new bricks. The thing is, it seems to me that if you really, really must write a rebound relationship song, you would do well to make it a) triumphant, b) giddy (high on all the new pashing you are doing) and c) monstrously good. Because the best revenge would be writing an amazing song about someone, but then, their discovering that it was about how you do not give two hoots for their company anymore. So it is a bloody good job Frightened Rabbit get pretty good marks on all these fronts - even if I think the very best Eff You pop songs also add to the mix a judicious, whoops-seem-to-have-emptied-the-bottle-in-there, dose of disco. And She #2 may not be ‘a cure for cancer’ (as the Rabbits have it), but she did at least inspire a single which is propulsive and strummy [calm down, it is not strummy in an ick way]. Also, New Sex is never not good, if we are going to be puerile about it. Which we are. I mean, I am. Also, would it not be rather amusing if She #1 left him because he spent too much time on the band? Or is that just me, being a big old, churlish silly again. [Yes.]

I am closer to pinning down what I like so much about Yeti Lane, and I think it is this: they sound fragile. They sound like weak and wronged, and rather than my thinking ‘GERROVA IT YOU WIMPOIDS’ I want to look after them, let them wipe their collective noses on my sleeve and not even care if I happen to be wearing my best silk blouse when they do. There is also, and I am not going to lie about it, something rather endearing about their slightly clumsy, tripped-tongued Fronch pronunciation, making them overall as cute as the darlingest button. The awful thing one must also hadmit, is that I want to keep them sad. They can stay at my house and sleep on my sofa, but every now and then I shan’t be able to resist dropping their horrid ex-girlfriends into a conversation, because if they make a full recovery, they will stop making mournful, dense and autumnal drone pop like this. Lawks, it’s everso complicated being an evil indie mastermind, sometimes one even confuses oneself.

Each week when I pull out the pile of singles, there is a wrong-headed moment when I start to make up what I am going to write, before I have actually listened to anything. It comes from the part of one’s brain marked ‘smartarse’ and this part was clangalangalanging, and shouting HOUSE! at the top of its oh-so-clever chops - almost as soon as I spied the red plastic case containing ‘White Feather’. ‘Oh ha ha harrrr,’ thought I, ‘it is Wolfmother, what I HATE, and think are RABBISH. If nothing, else, I can have a bit of fun with this.’ And I spect at this moment the Gods of Music were looking down and, bored out of their tiny minds, set upon me to have some larks. Because when I put it on, I found I liked it. I actually liked their silly, awful, Lynyrd Skynyrd by way of Zep II pointless to the point of cancelling-itself-out guitar-wanging. And I skipped some other singles on my pod so I might put it on again. I mean, all you really need to know is that this sounds like ‘Remedy’ by the Black Crowes; a copy of a copy by some copyists. But since I embarked upon this column with a desire to maintain absolute and scrupulous honesty, I am duty bound to report that I enjoyed it. Very much.

Oh look everyone, it is another The Something & The Something band, though perhaps we shall take this lot's name to mean they are a mixture of the spooky and the machine. An R-2 with a copy of Divination for Beginners [HACTUALLY EXISTS] in its back pocket, if you will allow me that. And really, that’s not such a bad idea – especially if it results in a double-a single which scores high on the ramshacklability and giddy scales but also manages to maintain important things like singliness in the process. ‘Giant’s Graves’ is essentially a call and response sort of record – with barrelling strums that are top hole. And as our lead singing chap asks where the titular burial sites might be located, he is given a list of answers in song form. Although I do hope he isn’t really going to dig one up. Meanwhile ‘Hetero’ shouts at us, asking ‘What do YOU KNOW about HET-TRO’ as if vanilla sexual practice were something suddenly quite mysterious. And you know, sometimes you find yourself wishing for a bit more than your essential box-ticking, middle class normalness, and for things like The Archers and dressmaking and shopping in Top Shop to be considered wildly outré, rather than the rank cliché they really are. Quite a nice lyrical switcheroo it is, anyway. More here

The first Tunng record I ever bought was a marvellous split seven with Dollboy, and it was one of those circle-jerking, we-remix-you, you-remix-us affairs. Lord, it is good. ‘Hustle’ is a far perkier proposition, but let it be known that though the folk revival (which has been going on Too Long now) is responsible for many a wrong, there are those who stand head and shoulders above the other strummers. Tunng are one of these tall poppies, and ‘Hustle’ is a very real joy, beginning with some misty, air-like piano echoes before it shakes and flickers off into utter delightfulness. This sort of warmth doesn’t just appear out of thin air, everyone - despite what some divs with a plectrum and a shoe-boxful of GCSE poetry might have you believe - so though I still can’t quite make up my mind if it is a happy or a sad song [see slowness-of-uptake, above], sometimes it is nice not to know, and not to have to dissect every wonderful pop song as if it were a poor, dead, limp frog.

The Courteeners - ‘You Overdid It Doll’ (A&M Records)

Let us end on a happy note. Not for The Courteeners, who – however hard they try – are ever going to be able to take back the sheer, Neanderthal offence caused by their empty-headed, vacuum-brained lyrics of old. Not even if they call me ‘Doll’ – which I quite like as a term of affection, but now they have ruined it. Do you know, I actually got a papercut from the press release for this record, and all day it nagged and pinched at me. ‘Nothing can be more irksome than this papercut,’ thought I, naively.

AND THEN I LISTENED TO THEIR SINGLE.

Sketches, The Molotovs, Ideals, Hoodlums, The Heartbreaks, The Crookes and Brilliant Mind - ‘Zip It Up’ (Celebratory compilation on Fierce Panda)

Parallels – ‘Ultralight’ remixes (This Is Not An Exit)

The Lost Levels - ‘Training’ (Something In Construction)