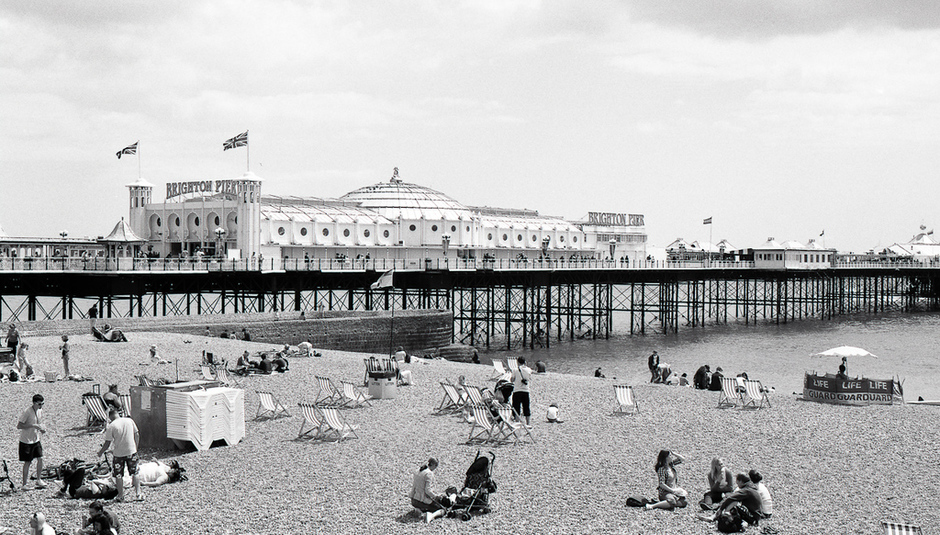 This week I was at the seaside, drowning in neon with a headful of wonderfully gaudy tat. And while it was taybly amusing watching hoodied hoodlums trying not to miss any notes of Bloc Party's 'Helicopter' on a kicked-in game of Guitar Hero in Caesar's Fun Palace (it is like the one in Vegas, only funner) - mostly, I had Cloud Control and dEbruit for my arcade soundtrack.

Also: ate too many chips. So if my judgement is off this week, it is because I have lard on the brain. Sometimes when a song has too many ‘bits’, it is rather like the board game Mouse Trap. Insofar as that there are so many interdependent plastic notches, one is sure to fail sooner or later. And Lord, will it let down the whole - even if the individual parts (diving man, ball bearing and all those levers; tipping, sliding) work beautifully. In the end, this becomes something of a tease. Because as the man in the tight shorts falls from his platform, part of you ignores his glorious, terrible fall, and looks instead at the cage - knowing it is going to get bloody stuck, half way bloody down. And the thing is, that mouse, it needs to die. All of which is a roundabout way of explaining how Cloud Control have a done a great, big, wonderful, many-bitted thing, so it is to their enormous credit that ‘Gold Canary’ is such a balmy, tender delight. From the sea-shanty, impossibly warm man-vocals that start it, to the psych-out at 01:30 in, to the yelps one cannot help singing along with, everything in this single works. You know, even if you get nose to nose with it and can see its gaping pores. Terribly good. More here

When The Little Dude was still being wheeled about in his buggy, my sister would often encounter those high street-based, tabarded twits we idiots like to call 'chuggers'. And if they happened to represent a children's charity, my sister would tease them brilliantly - pushing her precious cargo right into their path before noticing their logo and saying, wearily, 'Oh. Oh, no, no - not if it's for kids.' And though I find this impossibly amusing, especially when I imagine the resulting shocked faces, I cannot feel it would be an appropriate response to dEbruit's latest endeavour. Because he has specially produced a new EP using Haitian music for samples, and it is all to benefit Unicef - who are working to help out the kids of Haiti. The point is, I should quite happily give twenty of my mostly-absent quids for any music this cove produces - I mean, even if it did not come with an added dose of Good Deed. Download & donate generously here, even if you are, like I, entirely heartless. EDIT: you can also donate direct to Unicef's Haiti appeal here.

One really does hope this brings in a tonne of money for 4AD, because then they could perform some sort of teeny, tiny, whoops-there-goes-the-system, administrative or accounting error. You know, one that results in awl that cash lining the pockets of Merrill Garbus and Annie Clark. That is what I would like to happen. Please, someone, ‘make it so’.

Occasionally I notice how the People of Music get their knickers in a twist about genre names, and how they object to being lumped in with horrid scenes they consider themselves to be above or different to. And that is fine, but sometimes you wonder if it would do them good to remember that a) 99% of people don’t really know or care about genre distinctions, b) moaning about genre distinctions makes you sound like you are in A Mard [THIS IS NOT ATTWACTIVE] and c) sometimes – although granted, very seldom – genres are actually useful to us. Especially if they perfectly describe what is happening on a record. And what-do-you-know, this is how I feel about ‘math rock’ - it is such a singular, perfect way to describe what it sounds like; I need not elaborate or wank on for thirty pages (even though I am willing to bet there is someone out there who has). Anyway, this sort of brings us to Errors, who are both ‘math’, and ‘rock’, but who are also appealingly screechy, and not clinical, and here they are with a record that soars and really does take you on a journey (but not in a dread way), AND which comes with a sense of humour (their records are called ‘How Clean Is Your Acid House’ and ‘Come Down With Me’ DOYOUSEE). Goodness, I really do like them and I wish they could heggsplain quadratic equations to me, one last time. Brills.

Does not ‘Jail La La’ have a lovely sense of who-carezzzzzz about it? It seems to indicate that Dum Dum Girls wouldn’t care if you put them in jail (musical or otherwise) - and that, even if they did get SENT DAHN, they wouldn’t give the slightest, figgiest fig. ‘Tra la la, little bit of jail for us,’ they would trill - playing their garage pop all the way from the courthouse, using their leg-irons as impromptu percussion. And maybe that’s what happened, and I am therefore allowed to imagine this single is the theme tune for a campy 50s B-picture; peopled with Girls Gone Bad who smoke funny cigarettes and listen to jazz at five in the morning even though it is a weekday, and they like totally have to get up at 6am tomorrow to catch a train to the Catskills. The trouble is, when you actually get round to listening to ‘Jail La La’ the truth is much more worrying, with some perilously jangly choruses about going to an actual modern county jail and a plaintive cry for someone to ‘tell my baby, or else he won’t come back and save me’. The odd thing is, this sounds like a muddy bit of jangle pop but it is actually rather affecting. Also, tremendous.

Back when I had a real job and email was still the newest, raddest thing in the whole, wild whirl, a friend and I could regularly be found a-talking about how many exclamation marks we had spotted in that week’s missives. And as terminal grammar snobs, we would send each other examples. ‘Look here,’ we would say, ‘for surely this is the dumbest snippet of textual idiocy you have ever had the displeasure of reading.’ And then there might be a little total underneath, charting how! many! marks! had! been! used! And of course, if things got really, really boring, we might indulge our high-minded brains in an Inanity Competition – where naturally, points are awarded for the deliberate divvy over-use of exclamation marks, and bonuses achieved if you were also able to make your email uncommonly prickly and/or passive-aggressive. I mention all this because as you will have noticed, Los Campesinos! have an exclamation mark. The difference being that in their case, it is earnt by dint of their sheer, unstinting exuberance. No red pen for ‘Romance Is Boring’ then, because it is the silliest, liveliest thing all week. Well done them. ALSO: SOMEONE LOOKING VERY LIKE DAPPY STACE OFF OF THE X-FACTA IS IN THE VIDEOTHING, LOOKING MORE SAUCY THAN A BUCKET OF HAITCH PEE. HAPPARENTLY IT IS NOT HER. OR IS IT. NOT SURE I CARE NOW. DISAPPOINTED.

Peter Gabriel - ‘The Book Of Love (Virgin)
Written by Stephen Merritt, and if you spent at least one night of your youth making up 'Sledgehammer' dance routines in your best friend's bedroom (like what I did), I spect you will find this strangely enjoyable.

Caitlin Rose - ‘Dead Flowers’ EP (Names Records)
Probably the most mournful record this week, this is disarmingly pretty despite its dread and sadface subject material.

Fucked Up – ‘Couple Tracks’ / ‘Heir Apparent’ (Limited 7” on Matador)
Neither of these tunelets feature on the ‘Couple Tracks’ Best Of thingy, and that is why you need to buy them. More here

Mono Taxi - ‘How You Gonna Feel About This? (Ciao Ketchup Recordings)

Wendy is on Twitter, here. Not today though, because she is off doing some oink-oink with her new seaside scally mates underneath the pier. That's what you younglings do, right?