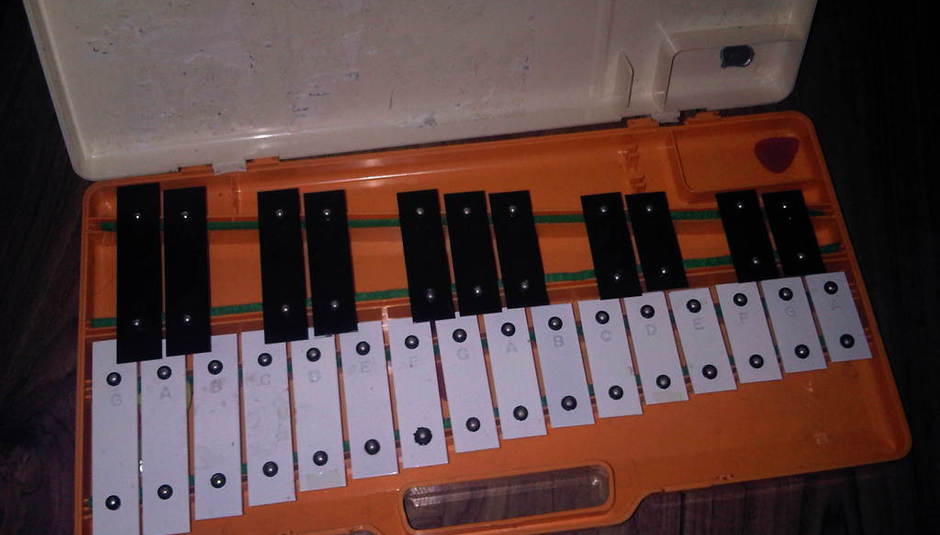 Gareth Los Campesinos! is auctioning off his Glockenspiel in aid of the relief effort in Haiti. Below, he tells us why he'll be glad for you to take it off his hands ...

In the past three years of doing interviews I've constantly been amazed at how much interviewers seem to care about the fact some of our songs include a glockenspiel. Not just casual mentions but whole interviews centering around the thing, as if there's actually anything interesting to be said about it.

The glockenspiel was an accident. I borrowed it from school one time to use in mine and Kim's old band, and kind of forgot to ever return it. It wasn't a deliberate steal, but I don't feel too guilty about it as glockenspiels were ten a penny at my school. Thrust into the hand of any poor, uninterested child in compulsory music lessons, after they'd mastered Merrily We Roll Along on the recorder, and driven the teachers nuts by exhausting every preset rhythm track on the keyboards.

In the band's formative stages our songs were either the 'pop hits' of yore ('Death To Los Campesinos!, 'Y! M! D!, Broken Heartbeats...) or these by numbers post-rock efforts we knocked up (I actually thought they were alright). Having no musical ability and enough common sense not to insist upon doing some spoken word whine about girls on top of these songs, I turned to the glock for something to do with my hands. And it stuck. I wish I just opted to use the opportunity to go to the bar.

It's served us well. For better, for worse I think we'd be near the top of any list of "bands what use a glock", and I'm sure it's a buzz word that piqued a few peoples' interest in us, but it's become the bane of my existence. I look around onstage and see my friends thrashing at guitars, or hitting the shit out of drums, or even masterfully taming a violin, and then I look to the end of my arm and see myself clutching at this dainty beater, and as I do so I physically feel my testosterone levels decline.

Y'see, I KNOW that nobody looks at somebody playing a glockenspiel and thinks "He's cool, I want to be like him". They more likely think "he wets the bed". Nobody's ever got laid off the back of playing the glockenspiel, and let's face it, that's the whole reason people start bands in the first place. It would almost be worth it if I could play it well, but I play glock in the same way Richie Edwards played the guitar. I'm mostly just coasting along thanks to my good looks.

People have come up to me after gigs (some of them GROWN ADULTS) and said that they've bought a glockenspiel (actually, they usually say "xylophone", but I know what they mean) off the back of liking our band. I feel awful. It's like how Davina McCall would feel if someone came up to her and said "I loved you in Streetmate so I started taking smack". And so, it's with a heart full of helium that I'm auctioning off Los Campesinos!' first ever glockenspiel. This piece of crap was used on our initial demos, the Sticking Fingers Into Sockets EP, and on Hold On Now, Youngster... . It's travelled all over the world, had numerous pints of beer spilt over it and always been treated with a firm but sensual hand, emasculating me time after time.

All money made from the sale of the thing will be donated to the relief effort in Haiti, so if you'd like to own it (and I know that YOU obviously don't), please bid far more than it's actually worth.