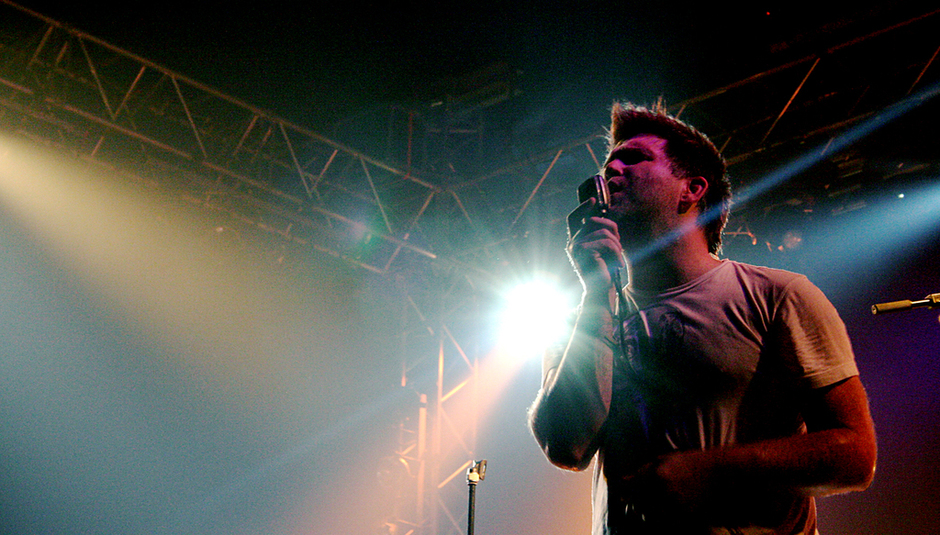 Few artists have bathed in Noughties' Zeitgeist as much as James Murphy. From production duties to having his hand helping to pull the levers behind the DFA label, his influence on the decade has been undeniable. He's topped many an album lists, including DiS' albums of 2007, beating the likes of Battles and Panda Bear. He's given alternative a kick up the ass with his observational cynical lyrical slant on hipsterdom, whilst giving those neon headband-wearers next-level anthems.

...but then, if you're reading this intro, you're more than likely aware of all of this and just want us to cut to our ten questions about 2010 that James Murphy took the time to answer. He wrote everything in lowercase and it had a hand-written charm, so we left it as is.

Here's what he has to say about the follow-up to Sound of Silver (easily one of DiS' most anticipated new albums due next year!), a new band he's been working with and a soundtrack he's working on...

Hello Mr Murphy, you've seemingly had an insanely busy 2009 working on things for 2010, what have you been up to? What music/film/literature/etc has inspired/excited you this year?

no remixes... not really had the time nor headspace for them - not to mention that i have to rethink the dance-floor a little bit, as i'm pretty bored by what people are playing right now, as it's often so buzzy and hard, but need to find a way to make what i like and have it crush that stuff. working on the LCD record, and the shit robot record, as well as scoring a movie for noah baumbach, which has been really fun. though totally distracting from the record and some other dfa business i should be attending to.

as far as what's inspired me, well, i really like that song "cold turkey" by that kid john lennon right now, and loved reading "the savage detectives" by roberto bolaño, though i don't know how inspirational that is. reading the new sam lipsyte novel "the ask" now, which comes out around the time the lcd record does, so maybe we could have the most absurdly awkward co-headlining tour together... brixton and bookstores?? What can you tell us about the new album? (What stage are you currently at? Any special guests? Any cryptic or broad brush-strokes statements about what it might sound like?)

well, i'm on hold with it, really. i worked for 3 months in LA on the thing, and really enjoyed it, then came back to new york and dug into the soundtrack and the shit robot LP, so it's still in that state. i'm driving this weekend in a car to work on it (good for the brain to drive and listen and sing parts/vocals/arrangement stuff into a handheld tape recorder, really). i guess it sounds like LCD, really. i mean, it's different in some ways, maybe the same amount that SOS was different than the first record--maybe more different. had to say until it's done. it sounded more generous when i was in LA, but since i've been back, the few things i've written for it and worked on are more spartan and muscular, the way lcd stuff often is. i think it will be good. i'm really proud of it so far. i just hope i don't ruin it.

Which records/genres have influenced or been benchmarks - apart from your own - for how dynamic the record needs to sound/feel?

i don't know how to answer that, really. i love music very much, and i listen to stuff all the time--but it's hard to pin that shit down for me. so much of it is about where i feel music is right now, and what i think "my job", such as it is, in music is RIGHT NOW. and that's been the process of all the records i've made, this one included. right now, i'm just not sure what my job is, but that's the way making things works--you make decisions based on the vague idea of what you think your job is, almost illogically, and the decisions themselves further define that definition. a little chicken-and-egg maybe.

Are there any lyrical themes or one-liners from the record you're happy to share with us? (is there a song called 'Why Do You Hate Music?' and is it a retort to Annie's 'I Don't Like Your Band'? Has LA had an influence on the record? Is there an 'Lala I Love You but You're Bringing Me Down' kinda track?)

there's a theoretical song called "why do you hate music", which has nothing to do with the annie song (haven't heard it), which it probably has a good deal in common with, but not yet an actual song. i often have song titles that guide the record but don't get made. this will likely be one of them. last LP there were several: "british teen", "here comes the backlash", "french riot". i just make them up and it makes us laugh.

We hear you're working on a soundtrack, what can you tell us about that?

not much. i like the director--we're friends--and we like a lot of the same music, so this has been entirely fun. sounds NOTHING like LCD, really, which cracks us both up. it's made to fit the movie, not be "my record". but i'm really proud of it.

Free Energy are bloody brilliant. What drew you to producing them and signing them to DFA? (Were you a Hockey Night fan?)

jon galkin. full stop. he found them, not me, and brought them in to dfa. he's a brilliant a+r man, a genius if you ask me, and heard more in them than i did. i didn't get it at first, but he kept pushing me, like "what do you think they should do in the studio?!?" until i started having answers and spent time with them. that was it. once i spent time with them, i was pretty hooked. i loved making that record. it was so good to record guitars again. i kind of forgot that i used to be really good at that--recording guitars.

What can people expect from the album? (i.e. a vague description, your favourite track, musical reference points, etc)

shit... an LCD record. i don't know how to answer that. i really like it so far. and i'm filled with fear about it. i put a lot of pressure on myself usually, and the results vary from moment to moment between overthinking and pushing hard enough that i get what i like. it's wonky and maybe a bit more synth-driven, but not necessarily more dancey. i don't know yet. everything might change. it's like that.

Stating the self-referentially and annoyingly obvious, was it a refreshing change to swap your 'turntables' for guitars for a while?

nope. it's always a mix for me. i never stop with either thing. i got off tour and went in to make the free energy record, where it's all guitars, and i'm playing bass and shit with pat playing drums, and dj'ing the special disco version parties with pat all along. then i went to LA, packed up a nice dj rig with 2 new turntables and a bozak and played records the entire time i was recording. there's no separation for me.

What are your top 3 albums and songs of 2009? (a sentence about why for each would be brilliant)

i literally have no idea what the fuck came out in 2009, with the possible exception of the dfa shit, so i'll just leave that alone. i'm what you'd call a "late adopter".

What are your top 5 albums of the Noughties?

i hate lists. nothing personal, but i don't give a shit about the 5 best anything from anytime. it makes no sense to my brain. unless it's the "5 best coffees in nyc", which is, in no particular order, el beit, grumpy, 2nd stop, my house, and dfa's office.

Thank you for your time 'Bye Bye Bayou' is out now on DFA records. The currently untitled third album coming Spring 2010 on DFA/Parlophone. He's been blogging on his MySpace and Twittering here. More info at lcdsoundsystem.com