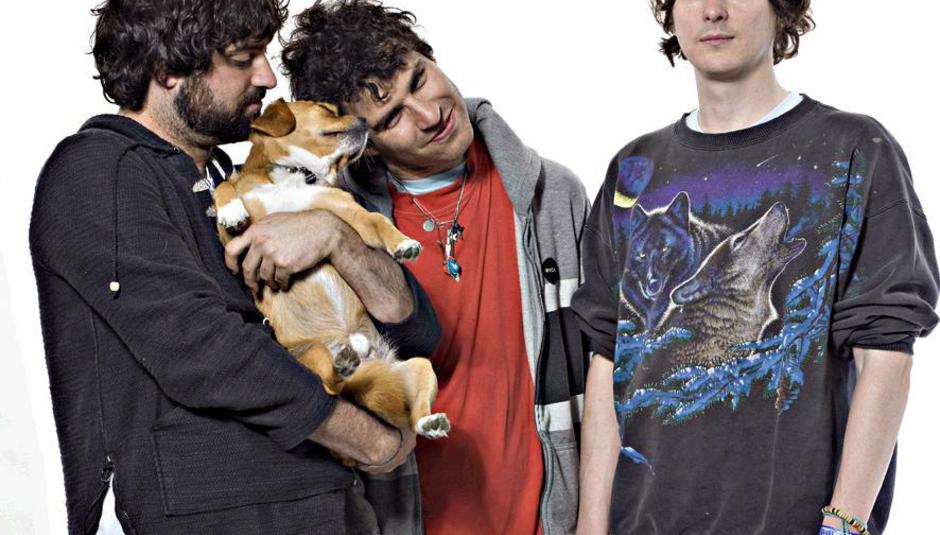 [Here is a warning. Imagine it’s written in neon or that I am bellowing. You see, I am aware that I run the observational comedian’s risk of over-sharing with this review. So anyone allergic to the notion of writers who might be moved by pop music and worse, who then want to tell you about their dreary tears - well, you should prolly pootle off now. Click on one of the pretty pictures around this text, and (kindly) do one. Next week I promise to return to cheap jokes about Prog / mildly xenophobic reviews of French pop.]

Sometimes, a song comes along that is so wonderful, even mentioning the competition seems wrong somehow; almost topsy-turvy. Guess what?

This is one of those weeks. First, let’s swat a gnatty irritant out of the way. For I have heard it said Merriweather Post Pavilion’s treacliness is a bad thing; that we might gag on a record like ‘Brother Sport’ because it is over-produced, over-long, a jam-filled, sticky bun of a thing. But do you know, I am not having this. And I am not having it because a) a record this profoundly moving is permitted to chuck as much icky heart in our faces as it likes and b) I have never been convinced by the notion of Too Much. I mean, too much what? Too much love? Pleasure? Happiness? Joy? Do forgive me for sounding like a trad stand up - but honestly, what’s that about?

It seems to me a peculiarly anorexic approach to dislike this record on the basis that it is too sugary, too twinkly. And granted, it’s only been slated by a rebellious (i.e. not rebellious) few – but it strikes me that this response is ohsovery arm’s length, and so very considered it sticks in my craw. I don’t want to be calculated about music, I want to get properly silly about it, and I want it to make my life better. I want to stick on a song and be swoonily transported, I absolutely love music that makes me cry and I DON’T CARE HOW WET THAT SOUNDS. I mean, these strange critical Puritans seem to believe that it's simply more sensible to deny ourselves the pleasure of a song like ‘Brother Sport’, in case something dangerous happens.

So. The most obvious and glaring thing I need to to say about ‘Brother Sport’ is that it is a real, heart-in-mouth, bona fide joy. Here are some adjectives that have been used to describe it:

Notbeingfunnyornothink, but I think those are good words. We might comfortably file them under a sign that says ‘superlative’ on it in massive, daubed black caps. I might even call them ‘uberlative’, if I was being bit of a div.

Now, usually when a record sounds this good, when it really does alight upon your ears like a whooshing surge of MDMA-prompted serotonin – it is all we music-appreciating idiots could wish for. And it would be spoilt to ask for more, one could quite rightly expect to be slapped down like a grubby-faced urchin, greeding up his porridge bowl. But the wonder of ‘Brother Sport’ is that there * is * more.

Let’s have a think about this in the context of a world where displays of emotion are often considered rather outré; embarrassing even. Where epic declarations that involve opening your heart / letting it all out are seen as vulgar. Because this is the bit where I want to argue that for all its rampant sonic positivity, ‘Brother Sport’ is in fact the height of rebellion. Because it doesn’t wink at us. Because it doesn’t try to have it both ways by inserting comic caveats left right and bloody centre. It’s not bookended by dim, winking emoticons. In fact, it stands so fiercely against notions of coolness (in both senses) that to listen to it is to give your modern, careworn, 140 character, permanently unserious, smirking self the Most Magnificent, Joltiest of Jolts. From the giddy POW! it begins with, to the soaring pausal breakdown 1:30 in (where you try to catch a breath), to the bit where it all comes back in again and floors you, it is saying; ‘This is about love.’ It ROARS with love.

Now look, I am a massive idiothole who cannot imagine the death of her parents without being struck dumb and static. I have a mini breadvan every time I think about it. But the wonderful thing is that when I listen to Noah singing to Matt, I feel much, much less frightened. To create a record this joyful, this maddeningly beautiful and so profoundly hopeful and wise - and all that in a song about loss! - is a creative endeavour so benevolent, it blows my tiny mind.

In Photos: Mew @ The Academy, Manchester