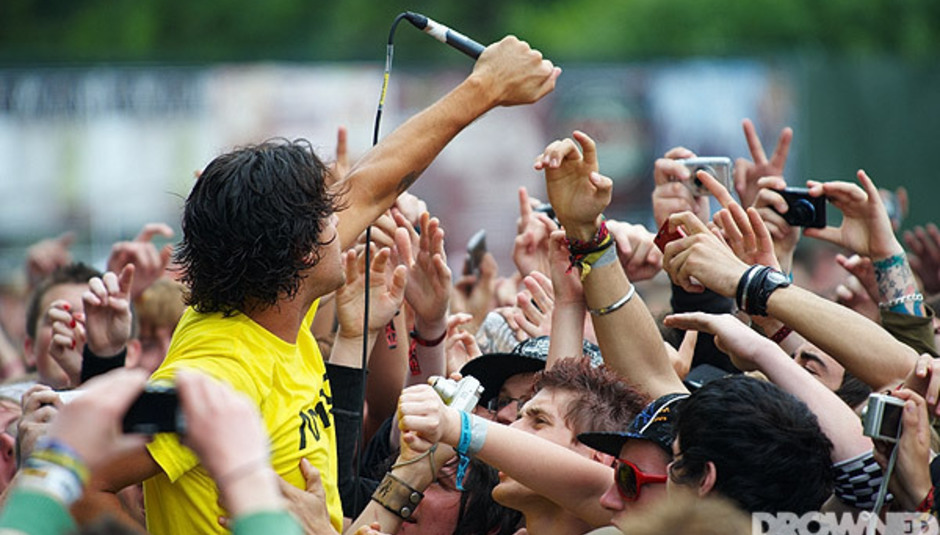 Or Sonisphere in Five Minutes

It's a brand new rock and metal festival, with an actually pretty impressive lineup. But what exactly does our intrepid reporter remember through the fug of Jaegermeister, Dominos pizza and energy drinks made of pure evil? Let's find out...

Today begins less hungover than expected, actually, and after a fruitless search for a vegetarian breakfast (DAMN YOU, MEATY METALLERS) it's time for Soil and their rapcummetalcore fusion – which is much like a spork (ie adequate for everything, but excellent at nothing).RUN to the other stage (the main and second stages alternate with no breaks, so you experience constant rock) for Alien Ant Farm: a bittersweet taste, as you can tell they've only really been booked due to their cover of 'Smooth Criminal', and you can also tell they dislike playing it. A quick breather, and perhaps a trip to the bar, before checking out the ironic booking of the weekend: Bjorn Again. Allegedly set to perform metal versions of ABBA songs, they actually turn out a relatively standard set, except for a faithful version of 'Enter Sandman'. It's ok, but surely doing it the other way around would be more entertaining? Toppermost Band of the Day honours must go to Anthrax though. With second vocalist John Bush back on the mike, they absolutely kick ass – and look happy about it to boot. Unluckily – or luckily, depending on your view – Coheed and Cambria are delayed due to ferry problems, so Japanese band FACT replace them on the main stage. Hooo boy. They're not thee worst band in the world, but they're not far off. Airbourne, though, are ace, playing balls-out rock like AC/DC and Aerosmith used to.

Back to the main stage again for Heaven and Hell, where much time is spent during the downpour trying to work out if Ronnie James Dio (above, second from right) looks more like Vigo from Ghostbusters II or Zelda, the baddie from Terrahawks. Back to the tent for a quick change, then back in for Linkin Park... and we have the winner for pretentious tossers of the day. It's the extended piano solo which sends us scurrying for the safety of the thus-far-neglected third stage and Fucked Up (who are awesome, as always), but apparently insult is added to injury through Chester Bennington bringing out his new band and playing three songs with them. I think, squire, that's called 'contempt for your audience', you should be punished. After that... it all gets a little hazy.

Right, so there's this "energy drink" called Monster which is being pimped to death onsite, ok? It's truly terrifying – it's 38mg of caffeine for every 100mls. Which is a LOT. Well, they're giving it away free in the press area, and it's great for hangovers. Not so good two hours later, though... And I choose to blame that for missing Buckcherry and Paradise Lost, and not my lazy ass. Killing Joke sound excellent as we enter the arena for their last song, and Saxon are still ridiculous. Lamb of God are as brutal as ever, but it's Mastodon who we're waiting to see. They don't disappoint – although their proggy superriffs do fade into one buzzy awesome monstrous noise at several points.

Uprooted to the main stage for the mystery special guests replacing the recently-cancelled Machine Head is... Machine Head! Yes, they've changed their minds about not playing for the fans, and the fans alone ( there are a lot here, it's a veritable sea of Machine Fucking Head t-shirts). Still, it seems to have energised them, as they play a utterly mesmerising set and win Toppermost Band of the Day for Sunday. Limp Bizkit have a bit of a task on their hands to follow that, and don't really pull it off – they look under-rehearsed and generally annoyed, to tell the truth. Despite protestations – and by being bribed with a really big muffin - I am carted off to view the new incarnation of Alice in Chains next; and am confirmed in my belief that they are in fact the most boring band alive. It's the next act whom everyone is gasping to see, though – it's Nine Inch Nails's last ever (yeah, right) UK gig. Which is almost entirely composed of the softer side of NIN. Yes, it's achingly beautiful and heartrending – replete with a bit of a tear in the eye as Reznor performs 'Hurt' for what might be the last time on these shores (yeah, right) - but I was hoping for them to go with a bang rather than a whimper.

Finally, and at last, it is time for the band this festival has been built around – Metallica. Christ alive, the behemoths of thrash are sounding awesome. It's a set heavy with material from Death Magnetic and 80s classics, and it never seems to fall below 200bpm. It's such a battering that I have to have a bit of a sit down half way through. Still, the encore – the Queen song 'Stone Cold Crazy, Hit The Lights' and the inevitable 'Seek and Destroy' is blinding as always, and the gig ultimately ends with the band and crew custard pie-ing James Hetfield because it's his birthday. Aw. I bet that would never have happened in the bad old days.

And that's that. I feel a bit sick from that muffin now. Does anyone remember where we parked the car?

The Icelandic music scene after the e...