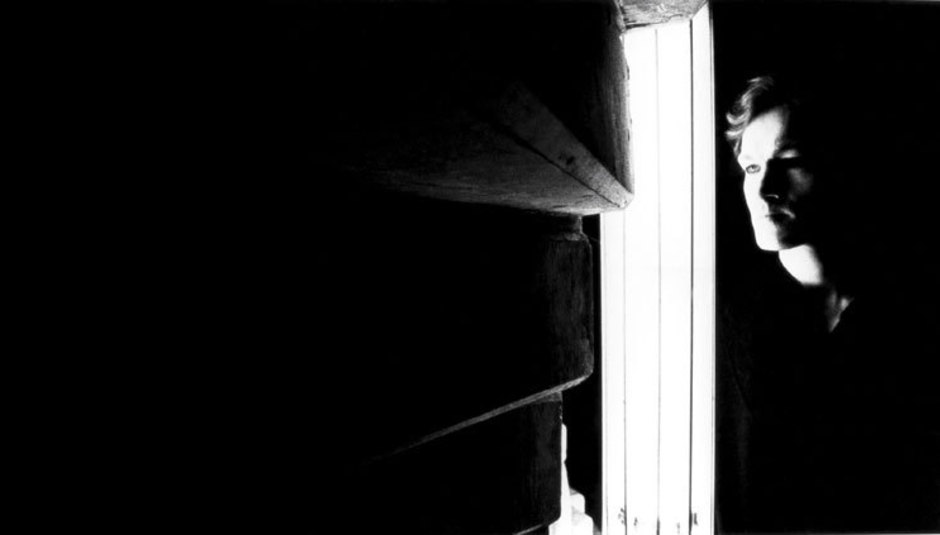 ‘Seventies electropop pioneer w/edge WLTM similar. No Scottish do-gooders name after gnats, plz’. That is not a real dating ad. BUT IF IT WAS it could have been the one that led to the latest instance of DiS setting two musicians up on a metaphorical date, as Gary Numan and original Ultravox! (as they were then known) frontman John Foxx go Artist’n’Artist.

As it is they just share the same PR or something. And they probably know each other already. But anyway, doubtless full of piss and vinegar after coming on stage to rock the O2 with Nine Inch Nails t’other day, Numan catches up with his peer just as Foxx bursts into a degree of action again, with Monday seeing the release of his new spoken word CD The Quiet Man. Drawing together readings from his dreamlike work-in-progress novel of the same name, Foxx performs excerpts from it at its launch at the Apple Store in London as part of the Rushes Soho Short Film Festival. AS IF THAT WEREN’T ENOUGH all next week an exhibition of art inspired by his work entitled DNA will be running at the Horse Hospital in Bloomsbury, which also features contributions from Numan.

Gary Numan: When did you first get into electronics?

John Foxx: When I was around 13 years old, a friend - Tony Bassett - was a sort of mad inventor (his serious work was converting an old Xerox copier into a time machine) but first he made a Theremin from a transistor radio. I was fascinated by what it could do. It worked beautifully. He's still perfecting the copier.

When I went to Art School I came across the Futurists and their ideas about noise being music, then John Cage. Around that time I was also fascinated as the Velvets put this into a modern context and thought I'd like to do the same.

Then came Brit Psychedelia, I was at the 14-hour Technicolour Dream when The Floyd played in Alexander Palace around daybreak - abstracting the music of the day into electronic sounds via feedback. Quite a moment. The Who had been doing the same with a more dapper violence. It was all getting very interesting, but I was really taken by this strange tangent of noise and machines which seemed unrealised at the time.

Later, at the Royal College of Art, I found a synth in one of the rooms and began to investigate. This would be around 1973/4. Then two friends Eddie and Sunshine got a monosynth and used it to make these marvellous outrageous noises on stage. That really clinched it, and I decided we had to do the same in Ultravox.

GN: Who were your influences when you formed Ultravox?

Movies played a big part, too - Un Chien Andalou, Last Year In Marienbad, The Third Man, Night And The City, and sci-fi - Robot Monster, Quatermass And The Pit, When the Earth Stood Still and Village Of The Damned. I took my visual image from those kids – that’s what I wanted us to be - The Children Of The Damned, all grown up and genetically entwined with the Velvets and Proto-electropsychedelia.

GN: How did the punk crowd react to Ultravox?

JF: Loved it - especially ‘My Sex’. Everyone actually went quiet and stopped spitting for five minutes. We were actually out there and playing before anyone else, precisely at the moment punk was coalescing. New York Dolls fans from year zero.

GN: Why did you record Systems Of Romance in Germany?

JF: England was all Alf Garnett punk. It had gone from squalling brat to grumpy old man with nothing in between. The scene in Europe was much more rich and interesting. Held far more potential. No one in Britain at that time was making anything resembling the sort of sound I wanted, so Germany was really the only choice.

GN: Can you remember much about those London Marquee shows at the end of 1978?

JF: Oh yes - we'd somehow managed to distil everything into a sort of beautiful consensual violence - all shape shifting noise, smoke and strobes - total psychic assault. It often felt like everyone in the room had become a single organism. Sweat ran off the ceiling, all over us and the equipment and the audience and everything was electrified. We still hold the record for the longest run of sell-out shows and total audience numbers in the Marquee’s entire history. A small thing really, but I'm pleased about that. Always liked Soho.

GN: Why did you leave the band?

JF: I wanted to take chances with electronics. Try to devise a sort of practical adventurous language from drum machine, pop music, synthesizers and all the movies I had in my head. You couldn't ask a band to hang around while you chanced everything on a single move like that. Meanwhile the band wanted and needed success, so it seemed logical to split and for each to pursue their own vision. I gave them the name, switched on the drum machine and we both got what we wanted.

GN: What inspires you these days?

JF: Many of the same things, plus everyone else I detect who shares similar DNA. Many of these ideas are only just emerging, even now. It’s taken that long. Also walking in cities - my favourite sport, and has been for the last 30 years. It has everything.

GN: What can people expect at the DNA exhibition?

JF: I'm eager to see it myself. It seems to consist of lots of movies and videos, plus artwork and imagery from people who might have mutated in sympathy.

GN: What are plans for the next year?