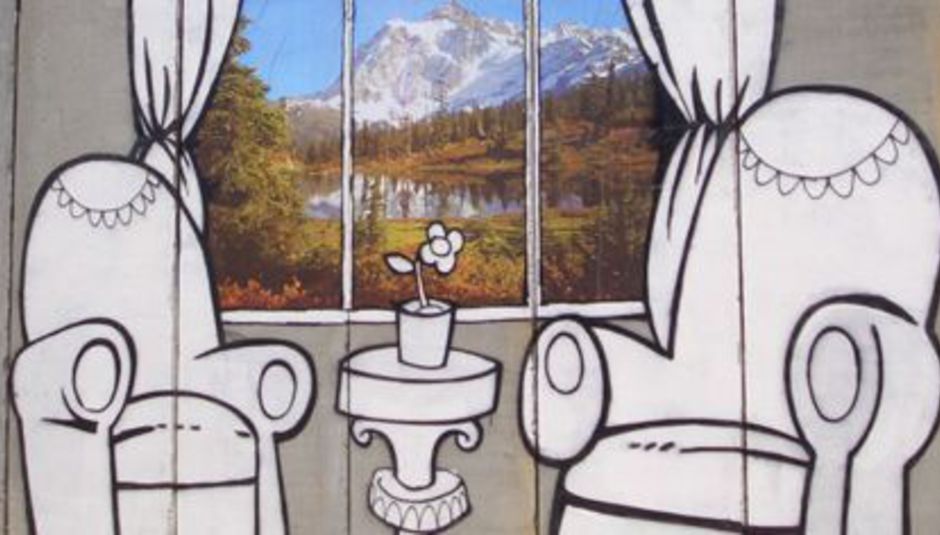 If you're worried about your dubstep/mnml/Bolivian chipbit supplies drying up beneath the heat of the summer sun, well, don't. While the indieverse, MPs and most of continental Europe pack up for the summer there's no shortage of new electronic releases coming down the pike. So, much as I'd like to tell you AD is off to soak in an infinity pool somewhere on the White Island and will return in September, that'd be a load of flagrant Balearics. See you here, grimy and bothered, in two weeks.

The bum anthem of the summer? It's highly likely. Ex-Global Communicator and Jedi Knight Mark Pritchard, aka Harmonic 33, Harmonic 313 and, oh, loads of other things, belies his Yeovil roots and goes all digital-era Reeperbahn with this lubricious bit of half-time dubstep. A collaboration with Om'Mas Keith of Sa-Ra Creative Partners, 'Wind It Up is both simple and devastatingly effective.

Every element of this record is percussive, the beat itself no more than an understated cordon within which the pitched-down, chopped up 'I'm a (freak)/She's a (freak)/You a (freak)...' vocal and two-note synth melody - so bassy its essentially a partner to the reggae-style bassline - drive the track forward. The 'Freak Mix' dirties things up to an even greater extent, adding some melodramatic horror chords and gut-troubling sub-bass. Caned on dubplate for months by Hyperdub boss Kode9, 'Wind It Up' caused something close to mass hysteria every time it was dropped at Sónar, and it'll no doubt carry on doing so long afer our summer - only sporadically blazing enough for proper al fresco batty-winding - has passed (listen).

On - Your Naked Ghost Comes Back At Night (Type)

Originally released in 2004, this collaboration between French pianist and electronic composer Sylvain Chauveau and Chicago's Steven Hess was, prior to release, handed to Norway's Deathprod (Helge Sten) to remix or otherwise recompose however he saw fit. Sten, a member of electronic improvisation specialists Supersilent, has since retired the Deathprod moniker, making this reissue all the more welcome for those who missed it first time around.

The depth and beauty of Your Naked Ghost... becomes apparent at once, the title track arcing from light, rattly frequencies down into cavernous subharmonics. It's a plunge that isn't reversed for the rest of the album's length, the deep-water pressure of 'Erotique' and subliminal rumblings of 'Too Many Demons Still Haunt This Land' setting up the startling arrival of 'Oh Run Slowly's more aggressively tunnelling drones. The sense of submersion is palpable, and by the time 'The Lonesome Poetry of Mark Rothko' hoves into view, its muffled clanks eerily suggestive of some malignant creature knocking on the hull, you feel as if you're stranded in some rusting hulk on the ocean floor (listen).

Kicking off with a Space Invaders sample then erupting into life with an irrepressible 8-bit melody fizzing over a heavily manipulated kick-and-rimshot dubstep rhythm, you might expect 'Rainbow Pixel Sequence' to more or less leave it at that. Brilliantly, however, Dave Hyetal's second release broadens itself out into a wonderfully trancey affair, that chipcore tune coming to be counterpointed by a synth line reminiscent of mid-90s Cologne techno. That these two elements should co-exist at all is kind of strange; that they should complement each other the way they do is almost worth a letter to your MP.

Peverlist's remix on the b-side slices 'Rainbow...' into wobbling, bass-warped cubes connected by abstracted propulsive strands of melody. Bookended by fazed bass bleeps and a technofied, bell-like high-end frequency the coda, reprising the more optimistic tunefulness of the original, feels like returning home after a fraught, fascinating journey (listen). It's only been a couple of months since Rome's Giorgio Gigli dropped his magnificent Magnetic Field EP (see AD005), but I've been hanging out for more like an auto-coprophage awaiting his next bowel movement. Incredibly, despite amping expectations beyond reasonable levels by having one of the best austere techno names of recent times, Observation Document #1 doesn't disappoint. The 12-plus minutes of 'Extrospection' are an audiophile's dream, a modulated background whine keening above a liquid rhythm track and a dipping bass pulse that arrives with the precision of a Swiss train at the end of every two bars.

Gigli pushes the deep, hypnotic elements of techno to the fore, achieving the minimalist's goal of constructing a longform uniformity that invests small developments with uncommon force. 'Introspection' is darker and more fractured, while the restless bassline, relentless hi-hat programming and sweeping granulated pads of 'Self-Reflection' explore an aesthetic that's at once more direct and powerfully emotive (listen). There's a beautifully warm feel to this outing under David Kennedy, aka Ramadanman's Pearson Sound moniker. He's been experimenting with some 4/4 rhythms of late but this is strictly 2step, 'PLSN's forefronted, tapping woodblock rhythms underpinned with a muted high-hat and snare shuffle. Surging pads flow around the beat like sunlight through leaves, with a filtered, trilling synth line inflecting the piece with subtly euphoric overtones. Over on the flip 'Wad' busts out the Latin percussion, a rubbery, chopped and looped diva sample swooping around above thick sub-bass pulses. Summery like chlorophyll.

'Retrospective' is a fascinating document of an era - 1992 to 1994 - when Bizzy B was part of the production vanguard rapidly mutating hardcore into jungle (listen). The clearest traces of the earlier genre are the occasional rapid-fire 4/4 beats that thump alongside rampaging Amen breaks. Diva vocal hooks, hoover basslines, heliumed-up Reggae toasters and moody, metallic pads clearly mark the vintage of these tunes, but they offer more than just a welcome flashback for the horns crew. Or, for the sake of equal rights, the whistle crew.

'Merder Style', a co-production with Peshay, is a compelling mix of strafing synthesised strings, a virtually out of control drum break (and there I was thinking how now unquantization sounds), Star Wars samples and an ice cream van melody that casts the whole thing in a sickly, demented light. 'Take a Deep Breath', a collaboration with D.Lux, looks forward to the sampling techniques of ambient drum & bass, a more melodic bassline and self-help guru sample playing out underneath - and this is where it differs from the later, softer strain - a still ferocious break. Chaotic and inventive, Retrospective is also a pointed reminder that genres which seem to be in possession of boundless possibilities can, in the space of a few years, become stagnant and predictable.

I hadn't heard of Richard Seeley before receiving this EP, but I'll definitely look out for his name in the future. 'Friggot' has that compressed, greyscale granularity to it that begs for big, dark rooms in which to be let loose. Insistently as the corrosive, almost 2step beat chips away, it's when a large bass pulse comes flapping up out of the soundbed in the track's latter half that it really starts sticking in the mind. 'Shrugg Binge' is worth your time, too, Seeley's focus seeming to be at least as much on detailed sound design and unexpected turns as on the demands of dancefloor dynamics (listen).

Given that the forthcoming Neil Landstrumm LP on Planet Mu bears the catalogue number 'ZIQ246', you might wonder why Jega's new album is only 'ZIQ024'. The thing is, Variance was originally slated for release in 2003, but when a draft version leaked onto the internet Jega (Mancunian Dylan Nathan) went back to the drawing board and, what with one thing and another, didn't finish it until six years later. It was much the same for me when I moved into my flat and it took me three years to buy a couch. I still don't have curtains. Anyway, the good news is that Variance is here and, as anyone familiar with Nathan's late-90s releases on Skam and Planet Mu will suspect, it's pretty bloody decent (listen).

While there's plenty of evidence that Jega hasn't fallen out of step with sonic developments during the intervening years, the first disc of this double album is heavily redolent of turn-of-the-millennium electronica of the Aphex Twin and Boards of Canada strain: it's shot through with that warm techno-pastoral blend of glitched beats and analogue synths that seems, with hindsight, like the sound of a more optimistic era. The much darker disc two is where more obvious dubstep influences - in particular harshly modulated bass splurts - can be heard, but it's tracks like 'Cascade Coherence', which blends the two sides of Jega's production style, that impress most of all. Mixed by Force of Nature's KZA, the third volume of I'm Starting to Feel OK moves away from Mule Musiq and turns up on sister label Endless Flight (which probably isn't named after Leo Sayer's fourth album). That doesn't change the modus operandi, though, of recent highlights and exclusives from Toshiya Kawasaki's excellent, tripartite stable. Theo Parrish's dub mix of Kuniyuki's 'All These Things' is a suitably immersive opener, and from there KZA proceeds to cover the key territories these labels explore. Picks of the bunch are the chiming, tribal trance of Mr Raoul K's 'Wind of Goree', the smacky disco groove of Cos/Mes's 'Natural Lifespan' and the utterly consuming acid-edged deep house rumblings of Motor City Drum Ensemble's mix of DJ Sprinkles's 'Grand Central Pt.1' (listen.

A confession: stick a pitched-down techno voice saying 'Berghain' in a record and I'm probably going to like it, even if the track itself were a mash-up of '9am Till I Come' and 'Sesame's Treet'. So it's a relief to my wispy scraps of credibility that Snuff Crew have decided to say 'Berghain' repeatedly over a concrete slab of jacking, acid-tinged electro replete with brutally repetitious staccato handclap-rolls and a three-note synth line that quite blatantly suggests not going to bed for the next four days might be a pretty decent idea. Virulently acidic b-side 'Control' goes a step further and - if I'm interpreting these lyrics correctly - in fact advocates flat-out insanity (listen).

The lowing cello and skipping percussion of 'Dawn' bode well for this album from Wolf + Lamb regular Smirk, who goes on to fluidly perform some absorbing abstract house manoeuvres (listen). The powerful, drone-influenced harp and tortured violin combination of closing track 'Contempt Plate' is particularly worth checking out.

Beautiful deep house EP from Manchester's Tony Lionni, whose piano anthem (god, haven't written that in years) 'Found a Place' was the highlight of Len Faki's Berghain mix back in the spring. The title track is pleasantly lush, but it's the more angularly kosmische stylings of 'Aurora' and the moodier, classic house-referencing majesty of 'Protection' that dominate proceedings (listen).

We finish with a palette-cleansing bit of straight-up house music from Italian duo Bunkers. 'Lost in the Red Room' loops percussive microsampled vocals over a robust 4/4, eschewing any kind of tune in favour of pure rhythm. 'Barajas' follows the same procedure but injects a Latin vibe, both tunes showing a keen awareness of how to instill tension with brief, subtle breakdowns. House music's equivalent to a well-cut tweed jacket. Possibly. (listen).

Before you go, and in honour of Zomby's excellent new EP (look for a review in late-August/early-September), I'd like to draw your attention to the sterling work done by the possibly genius blogger Rouge's Foam in transcribing the unceasingly envelope-pushing Londoner's 2008 track 'Kaliko'. Grab yourself a drum machine, a shortwaver radio, a saw, some other gubbins, and click here. Good luck.