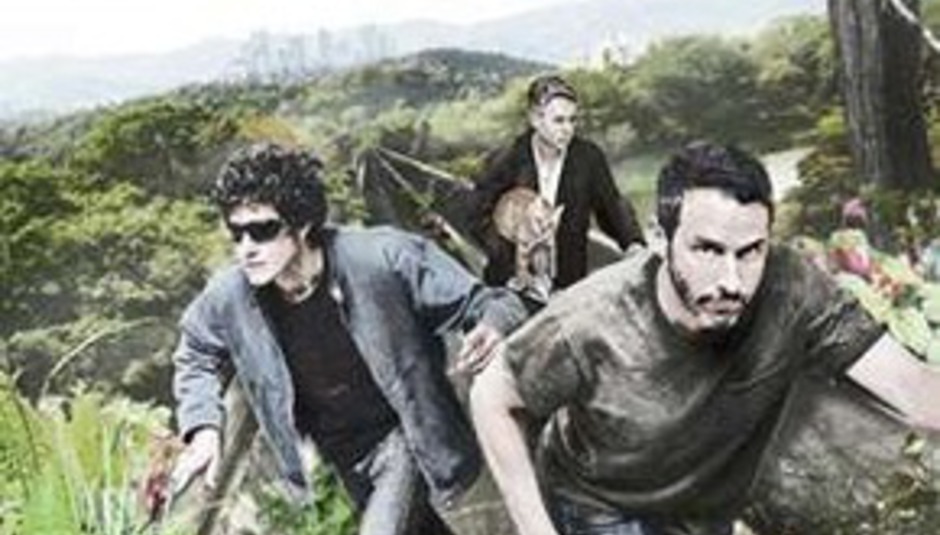 Nearly a quarter of a century since their debut album Licensed To Ill hit the shelves, the Beastie Boys' creative juices show no sign of drying up.

Prior to talking to them about the album and a good deal more, DiS sat down with an EMI iPod to give Hot Sauce Committee Part 1 an aural going over and made some notes to give you an idea what to expect.

The joking original mooted title of the album, Ad-Rock, Mike D and MCA get rolling with a curious nod to the driver of Elvis’s back-up singers. Distorted electronic squiggles dominate a slightly warped atmosphere that reprises yells of “And you don’t stop...” like ‘Sure Shot’ was recorded 15 years later on a stack of good drugs. Promising start...

Banging bass and the throwback feel of To The 5 Boroughs are tempered by what appears to be the gruff tones of MCA, lyrics buried beneath an oddly satisfying muddy treatment as pitch-shifting vocals dip between layers of fuzziness. Ch-check it out.

Our EMI iPod (presented only after a high security full-body metal detector search for potential recording devices) reads ‘Make Some Noise If You’re With Me’, but whatever the title this is a definite future crowd hyper, almost Daft Punk-esque bass-line overlaid with thwacking dusty drums.

Lyricism more entangled than vines in a rainforest, a funky break and whistles rattle around as the mic is passed with a frequency. And unless there’s some serious yoghurting occurring on DiS’s part, Ad-Rock also appears to make the album’s strangest statement, proclaiming “See one last profiterole and make my play”. Finger-licking good.

A playful vaguely squelchy electro intro is the signal for the Boys to rewind the clock, rhyming as if they were 20 years old again. Throw a vocoder breakdown into the mix, you say? Sure, why not...

6. Too Many Rappers (featuring Nas)

The indisputable high point of the record, thumping percussion accompanies the central sentiment: “Too many rappers/Not enough emcees”, although the ever-goofy threesome claim we misheard chat about “crack rappers”; the line in question is, they assure us, directed at “crab rappers”. There’s no disputing the proudly spat declaration “Grandpa been rapping since 1983”, though, and when Nas swaggers in with a seamless, highly conscious verse, Mix Master Mike might begin to look over his shoulder nervously as his fourth Beastie Boy mantle comes under threat. The most straight up hip-hop tune in recent BB history and all the better for it.

A menacing bass-line and more subtly overdriven mic effects give that in-the-booth feel, yet to the point where picking out individual lines beneath the hulking whole is tricky. Ends with a circus music-style mini-skit.

The album’s first proper skit, purportedly an in-joke concerning the group’s business manager’s record collection. “Hi Adam, it’s Bill. Thanks” is the solitary vocal sample in 23 seconds of silliness. Dude sounds like a riot. To the extent we suspect he may own Creedence Clearwater Revival records.

9. Don’t Play No Game That I Can’t Win (featuring Santigold)

The reggae-tinged backdrop, faintly whiffing of an off-cut from former Beasties collaborator Lee ‘Scratch’ Perry, betrays that Santigold very much takes the lead here. Sadly, there’s little chemistry, the ideas seemingly evaporate about midway through and the whole debacle is closer to Santigold featuring the Beastie Boys. Disappointing. Still, MCA, we think, restores a little cred, complaining about “clams with no tartar sauce”. Cream cakes and clams = ghetto, we think you’ll agree.

Ad-Rock is in combative mood here, boldly offering “I check my rear view/Emcees ain’t getting closer”, while a superhero-ish element imagines biting through haters with sharks teeth, clawing them with tiger’s claws and shooting poison out of their eyes. Rage Against The Machine-worthy bottom end and rampant organ seal the deal.

Another skit, this time a mere 21 seconds over a crisp drum break with snatches of cyber vocals.

“Put this on a zip disc/Send it to your lawyer” is an opening threat that doesn’t go unnoticed. The rhymes are almost throwaway over a beat that could almost sample Adamski, if only we knew the Beasties would never rewire something so simple to decipher.

Already out there in the scary wide world as a sly snippet giveaway with select copies of the recent Check Your Head re-issue (ditto an a cappella of ‘B-Boys In The Cut’, fact fans), this is a hardcore punk days nod with meaty guitar chug. Ad-Rock, it seems, declares “I seen your grandpa in apple bottom jeans” and successfully manages to make it a dis, an achievement in itself, frankly...

For such politically active musicians it always seems frustrating that the Beastie Boys have rarely strayed into global social issues on record; nothing really changes here, beyond the title, although the vocals are once again a touch buried to be sure, something close to liquid g-funk and disconnected phased-up beats three-quarters of the way to an Usher hit obliterated by robot voice effects of prime ‘Intergalactic’ intent. This is either Kraftwerk scored by Dr Dre or our headphones are a bit shonky.

Continuing the pop-brushed theme, a quite dramatic sweeping intro doesn’t, as it really easily could, push into a Britney Spears moan-fest, instead pivoting off an insistent break and plenty of nasal Ad-Rock delivery.

More food talk! This time “smoked salmon”. Damn, we’re hungry now. A sampled child’s voice is the key to the not-so-safe-for-kids ‘Crazy Ass Shit’ though, “You can’t stop/You’ve got to keep on” becoming a youthful mantra.

17. Here’s A Little Something For Ya

Initial bass burps raise eyebrows – are the Beasties about to follow Snoop Dogg into dipping tentative toes into dubstep? Once that opening has passed, however, it’s more familiar ground: playful rhymes, a terrace refrain, an organ breakdown, followed by what appears to be an untitled secret outro, proudly shouting out New York City with hands on hearts.

Hot Sauce Committee Pt. 1 is set for release on September 15th 2009 (and we hear the second part should follow shortly after as it is already mostly recorded too).