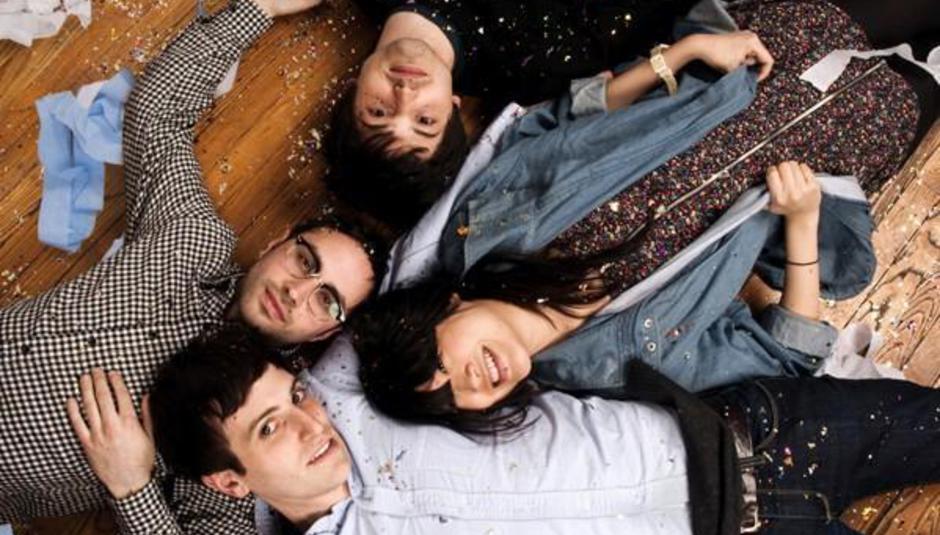 This time last year, The Pains Of Being Pure At Heart were relative unknowns outside of their native New York. Indeed, bar two low-key tours of the UK at the beginning and end of 2008, they were just one of many bands on both sides of the Atlantic struggling for recognition in a sea of indifference. Nevertheless, the cream always rises to the top, and TPOBPAH were no different. Having released two critically acclaimed singles on Fortuna Pop! ('Come Saturday' and 'Everything With You'), their self-titled long layer dropped earlier this year to resoundingly widespread praise.

DiS recently caught up with the band's singer/songwriter Kip Berman ahead of one their many UK festival appearances this summer, and not surprisingly found him in good spirits, if still in a state of shock at just how amazingly well this year has gone so far....

DiS: Its been a pretty good first half of the year for you guys... better than expected would you say?

Kip Berman: Oh absolutely! Its gone way beyond our expectations for sure. I mean, I never dreamt that our records would end up being so well received. I still have to pinch myself to make sure I'm not in the middle of some kind of dream to be honest!

DiS: It must seem strange that The Pains Of Being Pure At Heart are now being talked about as one of 2009's potential commercial breakthrough acts?

KB: You know, we don't like to think too much about things like that. I've never wrote music for the pure objective of selling a product and I wouldn't want to start now, or indeed have someone telling me that's a direction I have to follow either. I grew up liking a lot of bands that never really had a lot of commercial success, and although it's obviously flattering that we're starting to cross over to a wider audience, I don't think that should ever cloud our vision of the kind of music we intend to make in the future.

DiS: The last time we spoke, just before Christmas 2008, I remember you saying that one of the biggest problems for the band was all of you being able to get annual leave from your day jobs simultaneously to fit around tour schedules. Bearing in mind that you're going to spending a large part of 2009 in Europe, am I right in assuming you've now quit your day jobs?

KB: Well, thanks to the great economic state America currently finds itself in, I ended up losing mine, and our drummer Kurt [Feldman] was able to leave his, which is great for the band. Alex [Naidus, bass] and Peggy [Wang, keyboards] are still trying to balance their time around work and the band though, which is becoming increasingly difficult at present. To be fair, the people they work for have been particularly accommodating.

DiS: This summer you're scheduled to play numerous festivals throughout Europe. How has it been for you so far?

KB: Although we're playing a lot of smaller festivals, we're generally not aiming to do any of the major ones as we feel our live show is better suited to more intimate venues. Its like the ones we've played so far - The Great Escape, Dot To Dot - and even the ones we've got coming up like Isle Of Wight and Roskilde are more like club shows to us, because we're not on any of the bigger stages if you see what I mean. I think its cool as well that inbetween the festivals we're playing a lot of smaller shows, so in a way its just like one non-stop tour rather than just doing a round of festival appearances. Its been really cool seeing people singing back the words to our songs even louder than we're playing them though... so cool!

DiS: How has your live set evolved since those shows in 2008?

KB: I think we've definitely become more confident as a live band. I mean, until recently, there were a few songs off the record that we didn't play live because we didn't think we could do them justice - 'Teenager In Love' being one - but now we change the sort almost every night and we've managed to incorporate all of our songs into the live show at one point or another. We like to mix it up now, as much to keep us on our toes as keeping the set fresh. I guess the only constant has been closing with 'The Pains Of Being Pure At Heart', which is something we've always done from day one of playing as a band.

DiS: Are there any more plans to return to the UK later on in the year?

KB: Quite possibly. We're going back to America in July; it's sort of like a short tour along the West Coast with a band called Girls, who are one of my favourite bands at this moment in time. There are also plans to go to Eastern Europe at some point, which shouldn't be that different for us as we live in a Polish neighbourhood. We're also looking at putting together a full-on tour of the US sometime around the autumn, so there's maybe a chance we'll get back here before the end of the year. I'd certainly like to anyway, because the UK audiences we've played to have always been kind to us, even going back eighteen months ago when barely anyone knew who we were.

DiS: What about future releases?

KB: We're not planning on putting any more singles out off the album. We do have a couple of singles coming out later this year though - one in July and the other in September. They're both going to feature new songs. I mean, we could carry on releasing songs off the album until we die but I don't really see any point in that.

DiS: Have you been writing a lot of material, maybe with a follow-up to 'The Pains Of Being Pure At Heart' in mind?

KB: We've definitely been writing, but a lot of our focus so far this year has been on touring, and its quite difficult trying to combine the two. I guess when we get back to the States after the summer we'll maybe sit down and have a think about what we plan to do with regards to a follow-up, but at the moment we're just really happy playing songs off the first record, and more importantly actually having an audience that wants to hear them! We don't want to get too far ahead of ourselves; I mean, not every state in America has our album yet, so getting those songs out there first has to take priority first of all.

The Pains Of Being Pure At Heart are playing the following shows this summer:-

The single 'Young Adult Friction' is out now on Fortuna Pop! Records.

For more information on the band visit their MySpace.