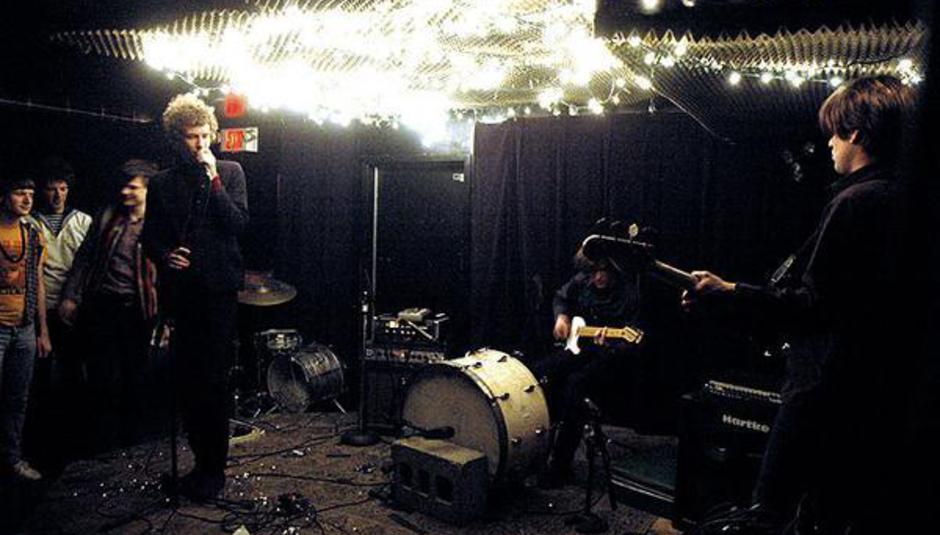 One is under pain of journalistic death to mention how the sun is shining, in order to make an amusing contrast with yesterday's free-swim Bank Holiday, when it did not see fit to make an appearance. Except it was sunny yesterday. Making today even more back-to-school and depressing than if it had rained. So while the weather can't win, the charts shall, for we have the muddy thrills of Crystal Stilts, and an enlivening (i.e. not very) mention for 1995-vintage Bobby Brown. Oh, do shut up and get on with it. So good, so gorgeously accomplished, so perfectly realised it is nigh-on impossible not to join the Stilts in their rolling barrel and scoot down their dingy, muffled, high-as-Dexedrine hill, this clocks in at ten seconds under two minutes and yet spellbinds for what seems like much, much longer. B-side ‘Sugar Baby’ is The Doors, obviously, and yet despite a hatred for cock-for-brains, stickers of women in wardrobes and setters of said wardrobes on fire [aiiiee – syntax! Sorry] it is similarly marvellous. It is odd how you will excuse musical brass-rubbings from some bands and not others - I expect it has something to do with how much one enjoys the copying. And I enjoyed this (and it's below, accompanying videothing) very, very, very well. I feel in a horrific quandary when bands write to me themselves. On the one hand, it’s a pleasing relief from the torrent of PR-emanated, unconvincing superlatives. But on the other, especially if they’re charming or funny (or worse, when you’re reminded that bands are made up of actual, human beings, with hearts as breakable and flimsy fragile as yours) - you feel the proximity of the creators too keenly, and it is difficult to give them a fair, balanced hearing. This little thought dawdle brings us neatly to Asleep Beneath Volcanoes, who write from Manchester with an overloaded paintbrush of ‘Brother Sport’-aspiring, MBV-redolent, sound wash. These poor darlings have less than 200 hits on their MySpace player, and it is good that I did not notice this until having listened to three of their tunes, for I might have written this in a fit of pity. But do you know, it is all rather pleasing. And if someone with a fistful of spare tenners would like to give them a few grand to spaff up the walls of a studio, I might like it even more. This has enough messy promise and ascending, aimless melodics to satisfy those who like to be taken somewhere unknown - big on distortion and fuelled by a sort of screeching beauty. Also – terrible name, lovely logo.

Asleep Beneath Volcanoes on the internets

Perfectly lovely, perfectly impossible not to write about without using the word twee, this will go down a treat at nights like London town’s impossibly friendly How Does It Feel To Be Loved. Were you not there first time round, and if you do not have a neat collection of Sarah sevens, this will do very nicely. However, as I was (just about) there that first time, this is a bit too swing your Farahs/adjust your kiddie hairslides/shuffle your square-toed sixties second-hand shoes for me. Oh go on, alright, it’s lovely. Is lovely enough though? Yes! No. They really are quite good. Yes, I do like them.

Mayer Hawthorne & The County - ‘Maybe So, Maybe No’ – (Stones Throw)

It’s difficult to be churlish about something so painstakingly produced and on-point. But in these Post-Ronson days, even the likes of Mayer Hawthorne falls flat, despite his gifting us last year’s utterly peachy ‘Just Ain’t Gonna Work Out’. ‘Maybe So, Maybe No’ cannot exist in a vacuum, because your ears have absorbed the strangled saxophonic horrors of ‘Valerie’, whether you wanted them to or not. In fact, I fear this dreadful, ubiquitous skinny-tied twit has pretty much ruined any chance of me ever feeling charitable towards a brass section again, despite the fact that I used to play the Euphonium. Readers, I know the warm joy of being surrounded by shiny brass (this sounds vaguely pornographic, I am not sure why), so I should be well disposed towards perfectly-pitched soul breakouts. Nevertheless, this leaves me cold.

Sugar Crisis – ‘We Are Here To Save You’ – (Weekender Records)

It’s an odd thing, but I do remember quite clearly when I first heard it was possible to receive free records if one was prepared to promote them in some way [non-interesting excursion here about whether that is what I am actually doing. Oops, etc]. I was all ‘Imagine! Free records! Gratis! Free! For nothing!’ i.e. never for one moment imagining that around 15 years later it might actually happen and that each morning 7 neat little jiffy bags would come plopping through my – mine! – front door. I also still believe it to be something of a privilege. But see, see how quickly such grateful thoughts disappear, when you stick a CD into your computron and the wrong name comes up, and you HAVE TO WRITE IN THE NAME OF THE BAND YOURSELF. Lord, it’s annoying. Anyhoo, iTunes seem to think Sugar Crisis are in fact wife-beating, drunk-driving pioneer of New Jack Swing, Bobby Brown, and that ‘We Are Here to Save You’ is his smash hit single ‘Two Can Play That Game’. Sadly, it is not. It’s an abomination from this horrific genre, this awful, mauled hybrid someone has chosen to call ‘wonky pop’ and it’s even more enthusiastically smiley than a boiled-for-five-days Alphabeat reduction, with no watery stock to dilute the happy. Oh alright, the verses are passably, sweetly breathy enough. But listen to that chorus. It’s High School Musical. It’s Same Difference – that is, a wolf in sheep’s clothing of a single so purposefully, terrifyingly ecstatic that you actually want to punch someone. This is more like it. In fact, the first 45 seconds of ‘White Sky’ are rather like what I imagine Super-8 film might sound like, were it melted down to vinyl - all sepia crackles and Bagpuss levels of poignancy (come on, everyone, I don’t know anyone with a heart who doesn’t get something in their eye when ‘But Emily loved him’ happens]. B-side ‘Devil in the Sky’ is a crisply pleasant acoustic workout which will not offend nor blow your mind, but is nicely drifty in a Dios-sort of way. (What happened to them? Goes off to listen to ‘All Said & Done’ / Thinks, 'This is even better than I remember' / Wishes it was being released this week.).