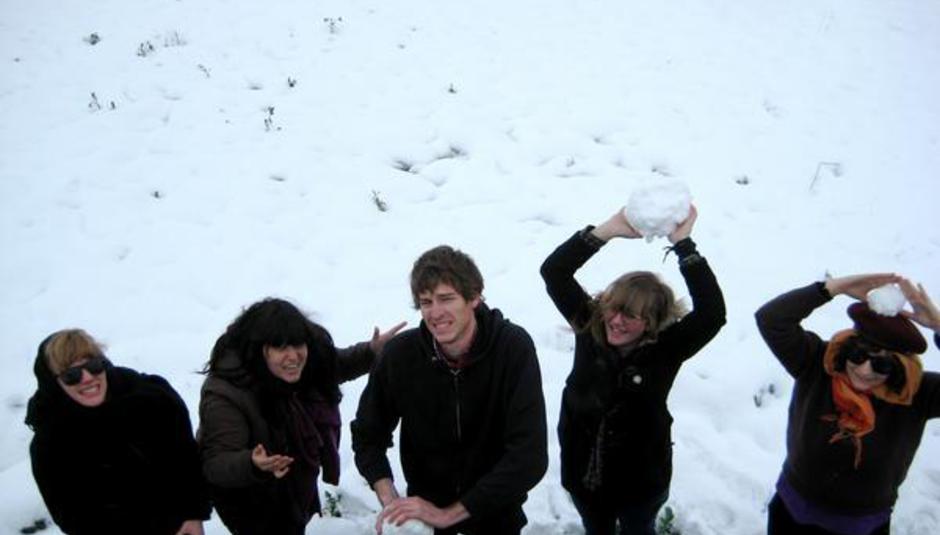 We've already told you how excited we are about Rollerpalooza, but now it's time to hear what one of the acts in question reckons to our seven bands/six DJs, skates and booze extravaganza.

Mika Miko are a wonderfully punky quintet from the same Los Angeles scene that's given us Abe Vigoda, The Mae Shi - both of whom play DiScover Manchester on May 14th - HEALTH and No Age, and their new album We Be Xuxa is one of the brashest you'll hear all year.

But not only are they purveyors of good music, it turns out they're also skating aficionados - which bodes well for their special Sheffield jaunt on May 16th...

DiS: You're playing in Sheffield for DiS at Rollerpalooza on May 16th. Are you excited? And will you be donning skates?

MM: Yes - it sounds great! Jessie [Clavin, bass] is a total fan - we will most likely all skate! Our American shoe sizes are as follows: four women's seven-and-a-half, and one male ten-and-a-half. We believe that translates to 38 for the ladies in the UK and for Seth [Densham, drums], we don't know.

Have you played gigs in many other weird locations/venues?

We've played in a ditch at The Smell. We've played at two bowling alleys, one in Los Angeles and one in New Jersey. We've also played in Michelle [Suarez, guitar]'s parent's bedroom with an audience of tons of children under five years of age who watched through a window.

You played a show here in Sheffield at Corporation last year. How was that? Did you like the city?

We liked that show, and we really liked the year before when we played at the Firehouse, or Firefly [She means The Redhouse - Ed]. We were told there was a flood and no one would come, but instead the show was packed and lots of fun. It was on Solomon St, the name of Michelle's cat. In Sheffield, after Corporation, we ate a birthday boy's vegan chocolate cake. It was weird. It was also where we discovered cider (Strongbow/White Lightning) in two litre plastic bottles.

There's a song on your new record called 'Wild Bore'. Is this the first Swine Flu anthem?

'Wild Bore' is based on play on words, The Boys style. Like 'Soda Pressing' or 'Sick On You'. We don't write topical songs. Fuck Swine Flu hysteria!

The album's called We Be Xuxa - why?

In the Americas, Xuxa is a big star. [It's called] We Be Xuxa because we would like to entertain as Xuxa does.

The longest song on the record clocks in at just over three minutes. Do you all have short attention spans, or are you just fans of brevity?

That is how long ponies thrash. After that amount of time, it feels right for the song to be over. You can interpret that yourself. Would you like them to be longer? I don't think Michelle would be able to handle it; she has a very short attention span.

Said three minute song is called 'Sex Jazz'. Given its length (or lack of), presumably it's not intended as a soundtrack for such activity?

Sade is meant for that. We would never try to replace Sade!

Black Lips are renowned for putting on a pretty special live show - are you looking forward to touring with them?

Yes. They are a lot of fun. We always look forward to seeing them. Everyone always has a lot of fun at their shows.

Finally, for people who've not seen you before, what can we expect from your set on the night of Rollerpalooza?

Rollerpalooza takes place on Saturday May 16th at Skate Central in Sheffield. Check Facebook and Last.fm for more details. Convinced already? Tickets priced £9 are available from WeGotTickets.com and SeeTickets.com.

Mika Miko's second record We Be Xuxa is out now on Post Present Medium.