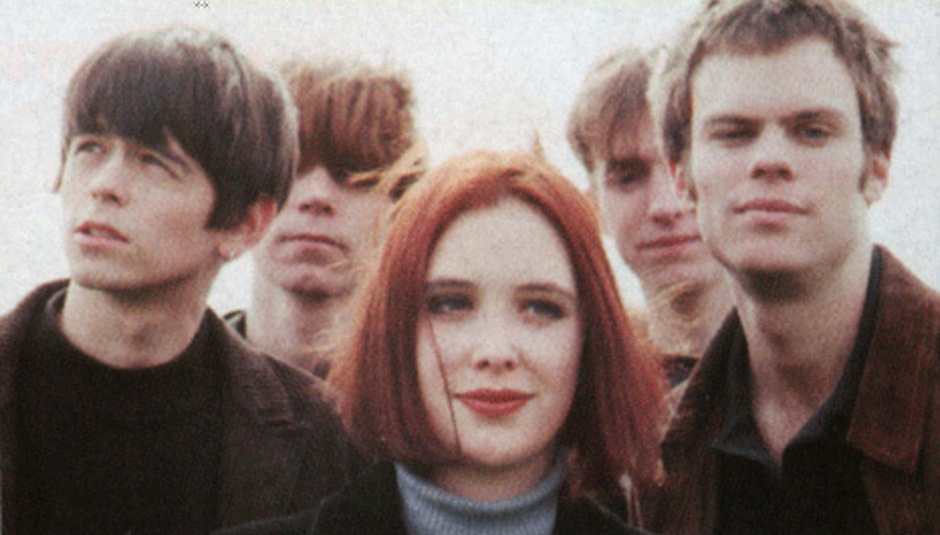 This may seem self-evident, but it deserves repeating: for better or for worse you can’t have an account of Shoegaze without Slowdive. Named after a dream-image that could have named the whole movement, the band epitomize a time and, through their ambient-leaning music, an idealized, sun-drenched – but still very English – place.

Through the retrospectoscope, the early-90s bands Slowdive, Ride, and My Bloody Valentine might all look like one big back-slapping scene, but you could just as accurately lump Ride, Radiohead, and Swervedriver together and call it the Oxford scene, i.e. not very accurately at all. The facts are: a handful of British bands converged on a sound for a period of time, which (for better or for worse) magnified the achievements of some, and painted others with the same brush. (Lush = pop-shoegaze; Chapterhouse = baggy shoegaze; Curve = goth-shoegaze; Boo Radleys = retro-shoegaze; and so on. Result? Shoegaze = WTF?!). See the rest of the week for more details...

To situate Slowdive amidst all this we can say that – like the others – they relied heavily on varying combinations of Reverb / Delay / Distortion, and sometimes feedback, generally warranting various synonyms of “swirling” / “epic” / “blissful” / “pastoral”. Unlike one of the first bands to show f/x-heavy rock could be commercial - U2 (the Eno years) - these bands weren’t trying to convey the grandeur of the New World... nor were they trying to soundtrack its destruction, like some of the contemporary noise, noise-rock and early post-rock acts. At their best (and for their detractors, their worst), Slowdive & co. were somewhere in between: purveyors of soma, and hypnotic soundscapes in an apolitical age; ecstasy without the clubbing.

Slowdive emerged from Reading almost immediately after My Bloody Valentine had gone into hibernation (or into the kind of hyper-accelerated spasms of frustrated activity that make a person seem frozen from the outside). In a sense, MBV were already a historic artefact, to be pawed over, probed, plundered, and much misunderstood. As a live-act, MBV had been extreme noise-rock; they looked to Yer Self Is Steam and Boces era Mercury Rev (who also blended flute into the feedback) and Dinosaur Jr, just as Swervedriver looked to Dinosaur Jr. and The Stooges. (Doesn't really make it a scene, though, does it?) Whatever Slowdive knew of MBV live, they more closely resembled the pastel and watercolour haze of the records, Isn’t Anything (1989) and Loveless (1991).

Perhaps most importantly, Slowdive worked with Ed Buller (ex-Psychedelic Furs) on their second album, and with Brian Eno. As he’d done with U2, Eno focused Slowdive’s ambitions to fuse ambient sounds with relatively conventional (albeit twee) songwriting, although his involvement only amounts to two tracks. Buller, however, may have been vital in helping them surpass many of their peers, and make what may well be the classic album of 90s Shoegaze, Souvlaki (1993). Starting out as a chart-friendly mishmash of PiL, the Pistols, and Bowie, for the early 80s, the Furs had made one of the great lost albums of the decade (Book of Days, 1989), which ranks with Hatful of Hollow for lyrical miserabilism, and saw the Furs perfect their layering of lead guitars that billowed and tore at each other (having been put through wah-wah and chorus), prominent melodic bass that carried the songs, plus ultra-low-mixed guitar and keyboard lines that crept into your unconscious. At their best, Slowdive created soundscapes approaching that complexity, although they preferred their sound to come in waves and throbs, and breezes and trills.

Neil Halstead (vocals, guitar, songwriting) and Rachel Goswell (guitar, some vocals, some songs), had only met each other at school in 1987, two years before the band formed. At the heart of Slowdive, and the Belle & Sebastian-go-Country band that the two of them later formed (Mojave 3, 1995 – present), is a simple, uncomplicated impulse to tell each other sweet nothings like “we’re in this together and we’re so close, your face fills the whole world, for me”. Being terribly English, and without the pressure of four young men in a rehearsal room riling each other, Slowdive were never going to be ironic, but they weren’t going to be entirely open either, so they initially buried their sentimentality and loved-up-ness in the visceral rush, and later, a more amniotic sound. The classic tracks, here, were ‘Slowdive’ and ‘Avalyn I & II’, without which no Mogwai (esp. 'Helicon I' from Ten Rapid, and much of Young Team), or Sigur Ros (esp. Von and Agaetis Byrjun). Check out Greg Araki's wonderfully preposterous film Nowhere for a fine choice of Slowdive tracks to convey teenage ennui in a floppy-fringed brave new world of unlimited sex & drugs & suicidal boredom.

Whilst their best songs barely departed from the sound of their confident early singles, Slowdive should have pleased more people with their first album, and you can argue that they suffered from being out of step with Grunge, but the fact is: there was a little too much drift and meander for this to be a classic, however well it's dated. Songs like ‘Morningrise’ and ‘Catch the Breeze’ were idealistic, erasing the grime and tedium of Reading... or hanging out by the very-sleepy-river, facing away from the post-war buildings, and pretending you’re in Nick Drake country. ‘Golden Hair’ (lyrics by James Joyce, previously set to music by Syd Barrett) was layer upon layer of nostalgia: Neil & Rachel looking back to Pink Floyd’s generation looking back to Joyce looking back to the original Romantics.

The debut album, Just for a Day (1991) had been a little uneven, but Souvlaki (1993) saw the band writing songs with more complex melodic development. Partly, this was the result of pressure from Creation to become more commercial, and partly due to Neil and Rachel’s break-up. On his own with an acoustic guitar, rather than jamming hedonistically with three guitarists, Neil literalized his sense of being gutted in ‘Dagger’ –

Elswhere, the misery was better incorporated into the signature sound. With ‘Machine Gun’, Slowdive may have recorded one of the most beautiful songs of the decade: washes of guitar coming in like the shallowest waves across the bed of an estuary. The emotional impact hinges on the contrast between Neil’s and Rachel’s vocals – hers are distorted to an almost unintelligible lullaby, the girl slipping away from you through the long grass, with the sun in front almost blinding; his, clearer and more obviously yearning, trying to follow her into the sun. In fact, the vocals are so obscured that it takes some time listening to bootlegs to realize that the girl in the song isn’t merely distant as an expression of her beauty – angelic and ethereal by comparison with her human-sounding lover – but actually dead, and somehow relishing her death by drowning. Yet again, it’s a confused (and adolescent) male fantasy – wishing her dead for being so beautiful she makes you realize your imperfections... only to seal her perfection, and so on. In ‘Dagger’, “the world is full of noises” had suggested Caliban’s description of the island on which he’s condemned to slavery for being tempted by Miranda, and there’s a similar ambivalence about loving a great beauty in ‘When The Sun Hits’ –

"Sweet thing, I watch you / Burns so fast it scares me
"My game, please don't leave me / Come so far, don't lose me
"It matters where you are
"As the sun hits, she'll be waiting / With the coffins, under heaven
"Hey hey lover, you're still burning...

Still, this was the closest Slowdive came to writing stadium-rock - the "Hey! Hey!" of the chorus mixed to sound like a crowd's response. Just as Ride are woven into the DNA of Definitely Maybe, several of the bands who drew on Slowdive would combine credibility and success.

With recent albums like Aphex Twin’s Selected Ambient Works and The Orb’s UFOrb and Adventures Beyond the Ultraworld crossing over to previously guitar-oriented listeners, Pygmalion (1995) saw the band drifting further away – literally, into space. Omitting the beats wasn’t a bad idea, but the songwriting is often too minimal to these ears to sustain interest, even across the anthology-selections. Whilst the best “song-songs” from Souvlaki (1993) haven’t dated, it’s hard to return to the rest of Slowdive’s back catalogue with as much enthusiasm after hearing bands indebted to their sound and improving on it, or approaching it from other directions. It’s one thing to set your sights on simplicity, but ‘Blue Skied an’ Clear’, ‘Crazy for You’, and ‘J’s Heaven’ don’t really live up to their titles, sounding more like being adrift in a rowboat on a stagnant pond. ‘Visions of LA’ could be the best track, but as a gothic folk lament sung by Rachel, its 1 minute 46 seconds duration doesn’t make up for the others, often approaching 7 minutes without a hook. Varying things a little more, ‘Rutti’ is led by brushed cymbals, but this kind of jazz-inflected ambient was being done better around the time by Bark Psychosis (channelling late-Talk Talk).

After disagreements over the third album (and Alan McGee’s insistence on a hit) had split the band, the emergence of Mojave 3 saw Neil and Rachel dispensing with electronica entirely. In place of the treated guitars were faux-country pedal-steel, and actual brass. Out of Tune (1998) is a good place to start – not far off The Fieldmice, or Belle & Sebastian without the character songs. Puzzles like You (2006) moves so far away from Slowdive (with its jaunty piano parts) you have to shed all associations with the people they were ten years ago to enjoy it, but it's fine for what it is.

More than half of the complete works is available on the two-disc Catch the Breeze compilation (Sanctuary, 2004), so you’ll find all of the songs mentioned above, there. The Blue Day compilation (Creation, 1992) is out of print, but contemporaneous EP tracks are available on the (generous) 2-disc editions of the three albums.

For a detailed history on Creation Records, including Slowdive, visit this site.