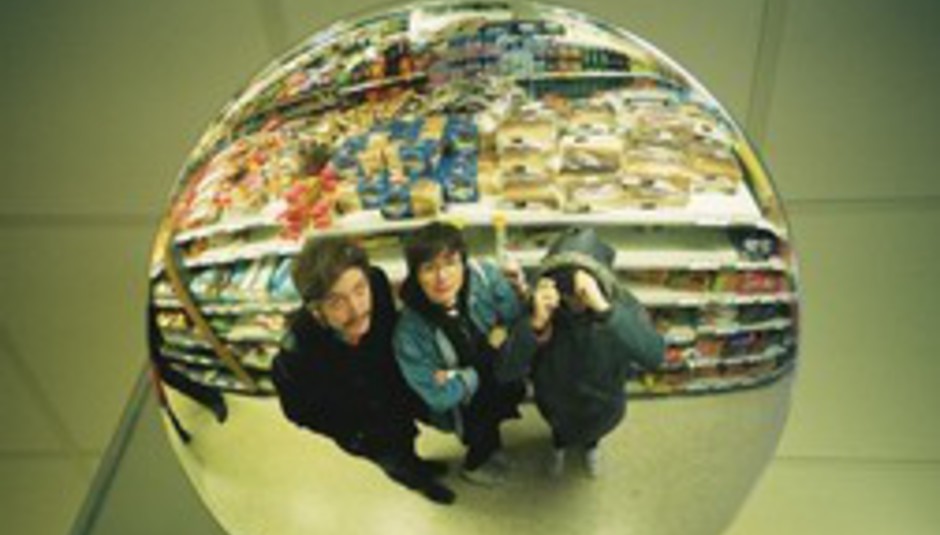 Here on the island, there's not much to do between shows. We sit by the glittering sea, kick through the singing surf and stare at the horizon. We gather ephemera from the high tide line and save the best things we find. At night, we light a crackling fire, sing harmonies and look at the stars. And in the stars, there is music.

The Monroe Transfer's 15 minute post-rock epic 'I Dreamt I Was a Hammer and Everything Was Glass' bears celestial arrangements and sense of grand scale; spidery bass creeping over mournful strings and resonant double bass, building purposefully to an almighty crescendo. Their sound can seem pretty retro at times, mirroring as it does the late 90s/early-00s output of Constellation Records, but this is an EP of genuinely, noticeably high quality; the flawless musicianship and austere sound palette lends itself to their sense of relentless, creeping drama. It would be nice to hear The Monroe Transfer stretch themselves sonically in future, but perhaps it wouldn't suit them to do so; for now, this is a fittingly weighty summation.

Casio-pop tweepunk trio Internet Forever (all DiSers, as you probs know) have been making a miniature tsunami around the blogs with their first demos over the last few months, as well as cherry-picking sought-after support slots and radio plays before even releasing a song. And it's all totally deserved, for once - Laura, Chris and "heartbeeps" are a great unit onstage, producing bashed out rhythms, atonal guitar fuzz and exhilarating, heartfelt pop melodies - every song sounds like a summertime hit single, full of bright-eyed excitement and drenched in lo-fi distortion. With new recordings on the way, cult U.S. label Art Fag have noticed them already - it won't belong before UK label suitors are queuing around the block.

In other news - Micachu & The Shapes continue to amaze with their oddcore lean-to DIY style, using bottles, cans and broken cymbals, distorted mini-guitar, Mica's husky, growling voice and totally unique hyper-urban musical magpie sensibilities. Shooting Spires come courtesy of Matty White Heat's unerring early-adopter sensibility, and is a bit like an electronic one-man No Age or Dan Deacon's hippy cousin. Name-changing NYC four-piece Skeletons fuse together strangely shaped pieces of alt-rock flotsam into a pleasing, jazz-riddled form, recalling everything from Why? to Beefheart to Pavement without ever settling long enough to be pigeon-holed. They're an imaginitive and endlessly interesting proposition that shape shifts it's way into your affections. Ponytail offer a genuinely euphoric show, thanks largely to the vocalising of singer Molly Seigel, who writhes around the stage in a world of her own, unselfconsciously glowing with happiness, wrapped up in the crashing rhythms going off around her. Ponytail occupy sacred ground somewhere between The Sugarcubes, The Slits and The Boredoms.

Upset The Rhythm's two-day Yes Way festival was an awesome highlight of the 2009 live calendar so far. A pick 'n' mix of new and favourite bands drawn largely from London's ever-present DIY scene (which means fuzzy demos, face-paint, lots of big hair, moustaches, and enthusiastically cack-handed playing, rather than putting up shelves in overalls, n00b, unless it's part of a feminist art installation). Highlights were the dark, mystical, reverb-ridden Graffiti Island, a weirdo party set from the scantily clad Cleckhuddersfax and a genuinely disturbing meta-musical performance from Bristol noise shaman Team Brick (pictured below mind-melding with an unwitting audience member). It's been an exciting few months for new music within the BRNLV biodome too. "A&R" with proper independent labels is often less to do with making business decisions than an acute, compulsive, extended version of super-fan activism. And so it is with the five new Brainlove signings you'll be hearing this summer. Explore for yourself:

Kippi Kaninus from Iceland is an organic-electronica (organitronica!) artist who's previously worked with Amiina and toured with Múm; Stairs To Korea is a dizzyingly inventive one man "krutt" pioneer with an easy knack for earworm pop and lyrical hooks; A Scholar & A Physician are renowned production duo who've turned their hand to writing preposterously funtime kiddie-pop bangers; Norwich-based solo artist Mat Riviere creates sparse but intense songs, heavy on brooding atmosphere and pretty, aloof melodies; and We Aeronauts are a folk arkestra/supergroup from Oxford that at times sound like a younger, breathlessly excited sibling of Arcade Fire.

Some, if not all, of these bands will playing at the Brainlove-sponsored Woolfire Festival this August, or at BRNLV CLB.

And that's it from me, until next time...

In Photos: My Latest Novel @ DiScover...