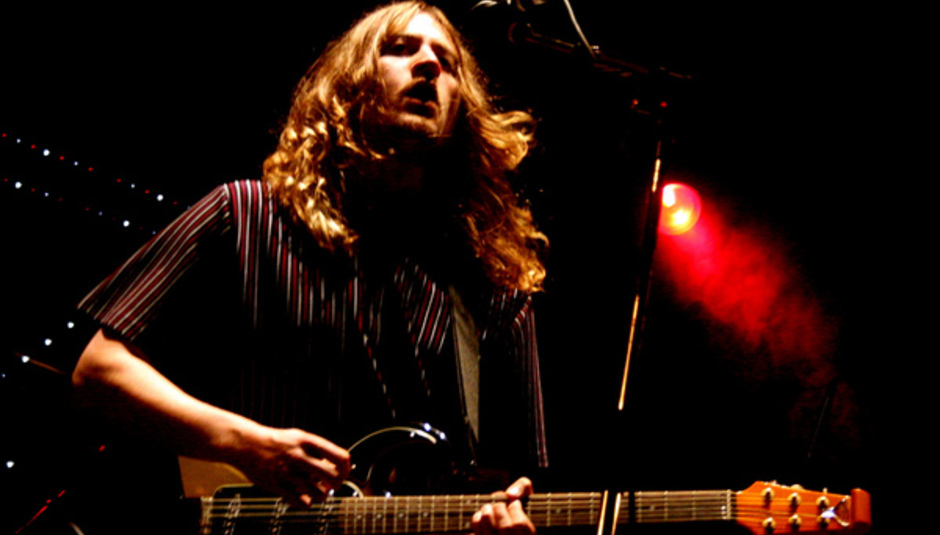 It's the inaugural year of Belsonic, a new, bijou festival taking place slap bang in Belfast's city centre. The location, Custom House Square, is nigh on perfect: essentially a rectangle with an enormous stage perched at one end and the Custom House hugging one side, it's a compact site that provides a spectacular backdrop to three days of local, national and international musical talent. We could and will quibble over the choice of headliners but the line-up still pricks our interest like a thicket of thorns - the opening day alone finds The Flaming Lips bristling besides Mogwai. What's particularly rare is the care and aplomb with which the whole thing is carried off, the promoters obviously putting a lot of thought into proceedings and, by festival standards, Belsonic runs with bullet train efficiency. Of course, organisation is one thing but, ultimately, it's the acts that decide the success of any such event...

It's early evening and overcast when the diminutive, corkscrew-haired figure of Richie Egan AKA Jape comes bounding out. The opening slot of the entire festival presents him with a lot of wide, empty space but he struggles manfully to fill the void with zesty indietronica, the blips and bleeps bouncing of the Square's stone surface, guitar contorting as maniacally as Egan himself. The songs are nimble, graceful but also emotionally hard-hitting: see 'Phil Lynott'. It's a beguiling song, sharp but humane in its observations and Egan sells the sentiment well. 'Floating' sparkles like a mirage in the Gobi desert and a stirring 'I Was A Man' finds at least one appreciative audience member in the shape of head Flaming Lip Wayne Coyne.

Buoyed by boisterous hometown support, Oppenheimer deliver a high voltage performance, with songs like 'Look Up' sending the serotonin levels rocketing. The electro-punk duo draw from a bubbling cauldron of ideas, serving up songs full of wit and musical dexterity. Later, they double in number to flesh out the final tracks and finish with 'Saturday Looks Bad To Me', the rhythms booming through the crowd like a depth charge.

Later, having apologised for bringing the drizzle, Stuart Braithwaite and company (Mogwai, then) begin to construct their towering crescendos of scything guitar and searing rhythms. Well, that was surely the plan, but for one reason or another it all feels curiously flat: the sound carries out from the stage and dissipates and the audience disengage, unable to latch onto the shreds of insubstantial sound. Only on the most ferocious songs, 'Batcat' and 'Hunted By A Freak', do they deliver the sort of performance for which they are renowned, full of ragged urgency, as fresh and impossible to ignore as an open wound.

Where Mogwai are curiously tentative, The Flaming Lips provide a full on freak power extravaganza. Their shows are a spectacle, all confetti cannons, dancers, glaring lasers, and a frontman who opens the show by rolling atop the audience in a huge transparent bubble. The only thing bigger than the spectacle is the songs, with the 'Lips traversing the full spectrum of human emotions in ways which are enlightening, exhilarating and relentlessly entertaining. Their little slivers of oddity cut you to the core, especially the songs that bookend this magical show ('Race For The Prize' and 'Do You Realize?' respectively). Thousands of faces bask in the glow from the stage as the first day of Belsonic draws to a satisfying close. It's magical. Highly regarded prospect General Fiasco play with plenty of pep and purpose, finding an appreciative audience in the threadbare but partisan number who've made it down for their second day opening slot. They deliver a tightly wound indie-rock set, but though the songs are well constructed they lack anything to truly mark them out from the pack. With a chorus as striking as a firefly in the night sky, 'Please Take Your Time' is the exceptional number, but generally, it's a case of vaguely enjoyable but predictable.

Volatile, impulsive and happy to trash convention, Future Of The Left are the epitome of unpredictability. They even engage with the construction workers on the neighbouring building site, asking one particularly disinterested grunt what he's reading. He flashes them a fleshy glimpse of page 3 of The Daily Star. "What a cliché," snorts Falco, "I had a fiver on you reading The Guardian." They are majestically narky, both in person and in their music: 'Small Bones, Small Bodies' sends us reeling like a gut punch. They conclude by dismantling the drumkit bit-by-bit, feedback howling out over the Square as the band retreat from the stage.

It would take an act of particular fortitude to attempt to top the preceding performance, and Fighting With Wire are just the band for the occasion. Cahir O'Doherty prowls the stage with a sense of hard earned entitlement; he is a compelling presence, throwing himself this way and that during 'Sugar', his vocal bracing, his repartee provocative. He asks the audience if they are looking forward to seeing Reverend And The Makers and The Enemy. They cheer and he declares,"Well I'm not". The subsequent boos are met with the retort, "Boo fuck, you can suck my wee balls." The band then tear into 'Everyone Needs A Nemesis', its majestic, gargantuan riffs and pummelling rhythms pounding any disbelievers into the dust. The rain starts once again and exquisitely average Irish indie-rockers Delorentos take the stage. They are the fag-end of the Libertines' dubious legacy, skinny men caterwauling over riffs which were rendered extinct circa 2004. There is a scarcity of authenticity or, failing that, memorable choruses.

The Go! Team are summoned to instil a little vigour into proceedings. They are determinedly over-the-top, providing a high-kicking, high-octane show. This boundless enthusiasm is encapsulated by Ninja; cartwheeling about the stage, she brings a visceral physicality to their performance, with the mish-mash of styles and urgent choruses of 'Ladyflash' and 'VIP To Someone' further igniting the audience's interest.

And so it's the turn of The Zutons. The headlining slot on the final night is one that carries a certain responsibility and on this occasion, for this band, it's a burden they're unable to shoulder. Regardless of what you think of their music, they at least have a reputation for delivering spirited live performances. Tonight, however, in front of what seems to be the largest crowd of the festival, they are strangely apathetic, even charmless. They start straight into 'Zuton Fever' and then proceed to wilfully ignore the audience, an audience who have, let's not forget, given up their Friday night to stand in the rain and watch them.

The DiS verdict: Of course, any festival is going to be something of a pick 'n' mix and if we are disappointed by the Zutons and, indeed, the other headliners, then the rest of the bill provided plentiful consolation. That an event of this scale is taking place in Belfast city centre should be celebrated and with a few tweaks and some more daring choice of acts, Belsonic should become an Irish festival to cherish.