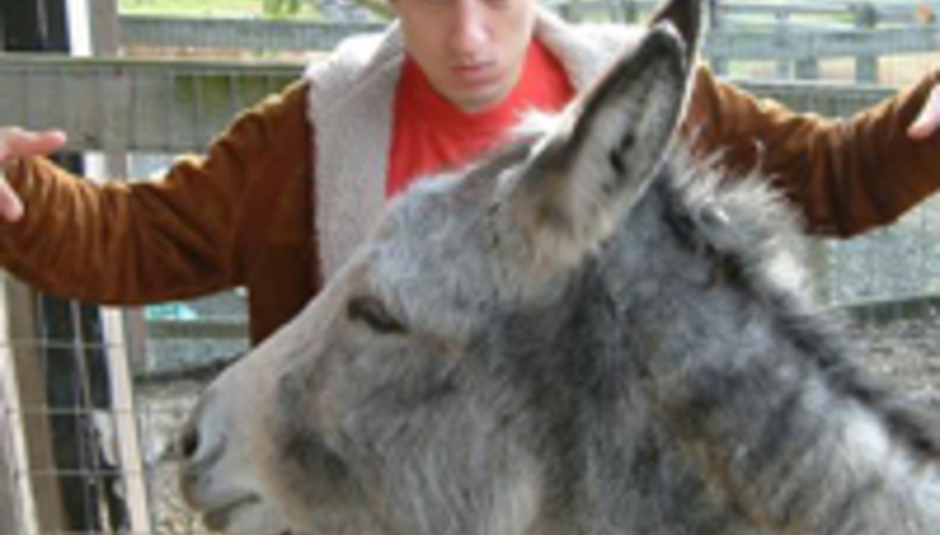 Though there’s a sideshow going on, with Department of Eagles’ return with In Ear Park waiting in the wings (more), Grizzly Bear have been back in the studio recording the follow-up to 2006’s melancholic blow Yellow House.

Out in the wilderness the Brooklyn quartet has been recording at Randall Wallace’s mountainside estate just outside New York. PEEK?

Taking a break from recording at Allaire Studios in the Catskills - whose alumni include David Bowie and Staind - we spoke to Ed Droste (pictured) as the Grizzly clan returned from such climbs for a slot of promo.

“It’s definitely the most beautiful backdrop [we’ve had]. We are in the Catskills in upstate New York at this gorgeous studio called Allaire Studios whose founder Randall graciously invited us to for a few weeks this summer. It's been really therapeutic and great for us to get back to being creative together and writing and rehearsing instead of the constant touring we've done for the past few years.”

Everything seems to be coming together, tracks taking shape. Discussing their recent performance on the Letterman show, Droste was glad to see how debuting new track ‘Two Weeks’ went down.

“It was amazing. The response to the new song has actually been really overwhelming. It was really exciting but a bit nerve-wracking to debut a new song on TV when nobody had heard it before and we'd essentially never performed it in front of any audience other than our boyfriends/girlfriends. Just really glad the song came off well and people are so excited about it. We’ll definitely be playing it lots on the Radiohead tour along with some other new songs.”

Droste has also recently be flaunting his garish bloom courtesy of second-storey garden with pictures posted up on the band’s blog. So what brought on the recent horticultural pursuits?

“My boyfriend is the real gardener – I just buy lots of plants that I get excited about and he tends to them much more than I do; I just like watching them grow. We have a small table out there and it’s really nice because it’s on the second floor so we are above the street and a nice breeze. I wouldn’t say it’s played any part in the new album, but it’s made me happier.

“I’d say I'm most excited by our three vines that are growing like crazy. I am a tad impatient so I love the plants that grow really fast.” With Department of Eagles releasing their follow-up to 2003’s The Cold Nose (headed by Bear Daniel Rossen with friend Fred Nicolaus, and produced by Chris Taylor) we queried whether Droste, having started Grizzly Bear as a solo venture in 2004 and producing bedroom beauty Horn Of Plenty, has been sculpting any solo material, or if he’s strictly Grizzly Bear?

“I’m strictly Grizzly Bear. There are always these other ideas with other musicians I have periodically where we’re all ‘let’s make an EP’, but when push comes to shove I’m primarily concerned with Grizzly Bear rather than doing side projects. That said, the Department of Eagles record is really fantastic and I’m really glad Dan decided to finally record these songs of his and Fred’s.

“I had said in previous interviews a ‘sunnier’ record [was coming], but that’s not necessarily true - it’s just got a few poppier songs, a few darker songs a few stripped-down tracks, and a few really orchestrated lush ones. More dynamics, essentially. I’m really excited about the material, needless to say.”

Grizzly Bear head out hunting round the US on tour from Thursday (July 31) and a spate of dates with Radiohead stateside from August 3.

Department of Eagles release In Ear Park on October 6 through 4AD.