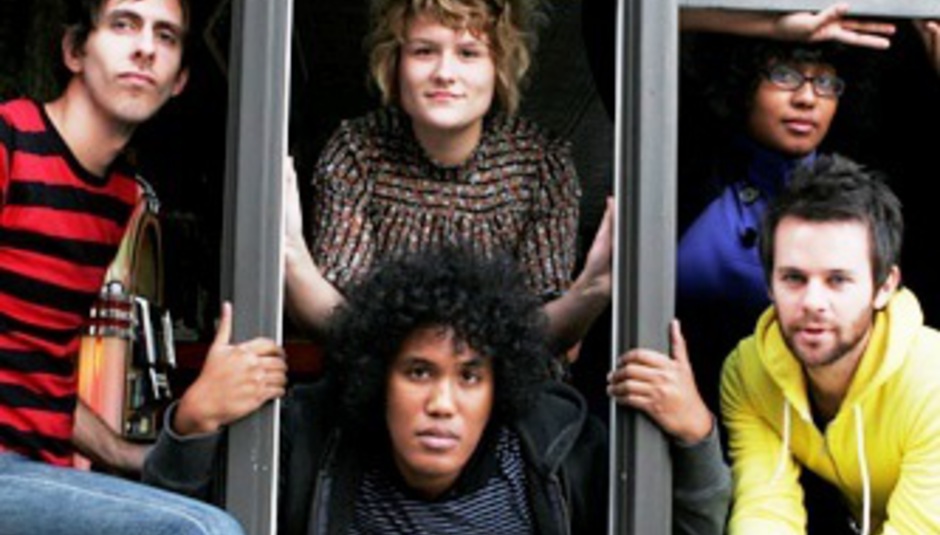 Beyond the frontlash: Black Kids on their "classic" debut

Beyond the frontlash: Black Kids on their "classic" debut

Ahead of the release of their much-anticipated debut album Partie Traumatic on July 7, DiS grabbed five minutes on the phone with hyped Florida five-piece Black Kids’ Kevin Snow.

- - -
Video: ‘I’m Not Gonna Teach Your Boyfriend How To Dance With You’

What’s it been like, being in the middle of a storm of hype you’re not really responsible for, and that you can’t control?
Y’know, it’s kinda… We just sort of focus on what we’re doing.

Right. So did the buzz at the turn of the year come as a surprise?
The thing was that we only had four songs [out at the time, the Wizard Of Ahhhs EP], and when we’ve been playing these shows they’re the ones people know. It’s great to get these new songs out there, to show people exactly what we’re about. We feel like there’s a lot of diversity on the record, and we’d like people to hear that for themselves.

And what made you want to record the album in England, with Bernard Butler?
It wasn’t our initial idea to record in England; the idea was presented to us by a third party. We’re fans of Bernard Butler’s work with The Libertines (‘Don’t Look Back Into The Sun’ – Ed), and Reggie [Youngblood, vocalist] and I were big Suede fans. He knew right away what we were trying to do, and it made perfect sense.

He’s quite the reputation for making these grand-sounding songs – is his influence evident on the album?
All the song structures were there before we went into the studio, and the actual process allowed us to add a bit of what our influences are sonically without full-on mimicking them. It allowed our sound to come through. We recorded the singles in December (see the videos – Ed) and the rest of the album in February and March. “We set out to make a classic album, and we feel we’ve accomplished that”
- - -

And now the finished product’s in your hands, how do you feel?
Well, we set out to make a classic album, and we feel we’ve accomplished that. And hopefully it’s the first of many. We feel that we’ve accomplished our goals with this record. But we imagine there will be people who despise it.

Despise it? Probably not, although there will always be critics. Speaking of which, how will you ride out the inevitable backlash that’ll crawl from some quarters?
I think we’ve already gone through that cycle – someone coined the term ‘frontlash’ for it. In the last six months we’ve been through everything, from the hype to the backlash. We can understand the backlash – when we’ve friends into new bands, we think they’re probably going to be shit! We understand where these people are coming from.

Is any of this scepticism because of the rapid nature of your rise to prominence?
Sure, people can look at the success and ask questions, and have a certain perception of us. But that’s a bit frustrating – we’re not teenagers who just picked up guitars and bashed out an album. Reggie and I have been in bands for ten years, doing shitty tours. We’ve had 20-hour drives to shows where we’re met by an audience of three people. I know it doesn’t sound like we’ve been playing music for that long! But we’ve certainly been trying.

Partie Traumatic will be reviewed on DiS in the coming days. Find Black Kids on MySpace here and see them live as follows: