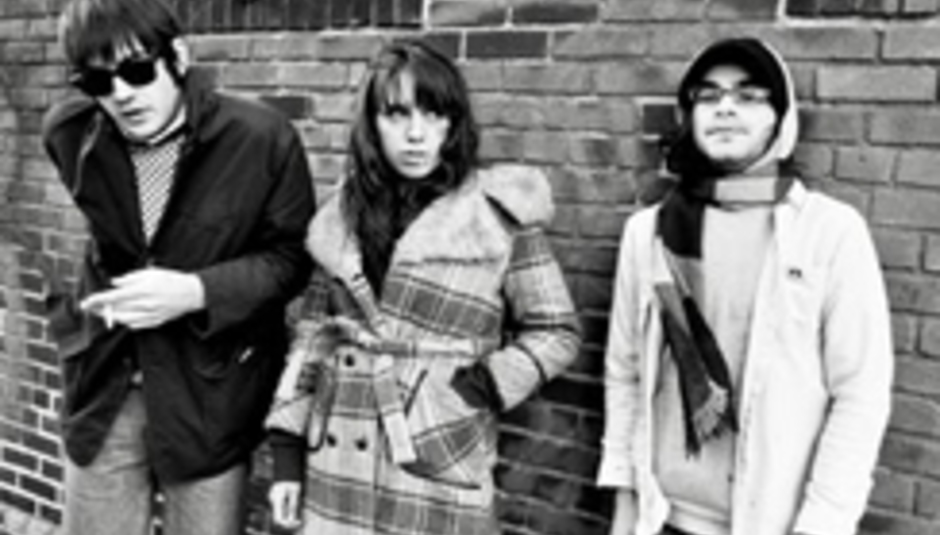 It’s a beautiful thing. I’m speaking with Times New Viking minutes ahead of a Camden show in the venue's heaving back yard, and as the tape rolls they’re gradually getting lost amid a rising clamour of half-cut conversation. One woman comes over especially loud and clear; expect an exclusive interview to run with her in the very near future.

For the band it’s all par for the course; their recent Matador debut, Rip It Off, is a frantic onslaught of lurid guitar pop overamped to such an insane degree it bleeds into an excruciating felt-tip sludge, the vocals barely discernible from any of the other instruments.

The songs are terrific, the migraines even more so, but even as I’m giving myself a headache with the transcription, it’s impossible to get angry – spurious analogies like these are the stuff intros are made of.

Over to Jared Phillips (guitar), Beth Murphy (keyboard, vocals) and Adam Elliott (drums, vocals) to make some noise on their own behalves:

Were you all big noise-rock fans when you started out with the band was it more the case that the songs you wrote just sounded better the more distortion you used?
Jared: Well you know I can’t stand to listen to noise stuff most of the time, I like the noisy stuff that’s kind of rock-based…
Beth: But we didn’t really figure any of that stuff until after we started the band and people referenced us in relation to these bands... But In Columbus there were a lot of noise bands like two or three years ago. You either go to some art space to see your friends do something really weird or you go to a really terrible bar and see all these terrible bar bands.

How does this fit in with the whole shitgaze scene we seem to be hearing so much about these days?
J: It was just a bunch of noise and punk bands, but kids are playing less noise and going more towards songs now. But then I think how Wolf Eyes put out a Sub Pop record, or No Age, you know, they used to do Wives which was more of a noise thing…

Are you into a lot of those bands?
J: There’s still a lot of bands from the ‘80s we’re catching up on.

So you’re tackling things chronologically then. What year are you on?
(Common consensus) 1983. I think we’re stuck on that one actually.

Do you get much flak for being not quite a noise or a pop band; for falling between the cracks as it were?
B: People get irritated with how loud and distorted it is… I mean there’s a place for that and it doesn’t bother us at all.
J: There are some noise purists who say we’re not really noise… there’s no way to insult people that hasn’t been done to death, it’s not like we’re doing anything new. After you’ve seen GG Allin eat his own shit there’s not really much you can do…
B: Except not eat your own shit.
J: Yeah. But it’s dumb when you see entire articles written about how it’s not a clean-sounding record, it seems like after the first minute it’s pretty obvious how the record’s gonna sound.

You’ve toured with Super Furry Animals in the US – how did that go?
J: They liked our record… we love them, I drove five hours to see them live once. The one guy, The one guy, Cian (Ciaran, the band’s keyboardist), is gonna remix one of our songs, ‘My Head’. It’s like first time we met them we looked at their records and the first one we see is by Psychedelic Horseshit. For such an overproduced – ahem, I mean such a produced band what they listen to is awesome.

Do you find it strange that people would have issues with the noise aspect of what you do given that those tools have been available to bands basically since amps were invented?
A: Yeah… Velvet Underground came to Cleveland in like ’66, since then in Ohio it’s been like a competition with bands to see who can make the most noise…

Do you always start with a song and make it noisy or does it ever work the other way around?
J: Yeah, we’ve never written anything based on layers of noise. We don’t add things so much as turn them up. There’s not much in terms of overdubs, we just record it and mix it… a little half-assedly. We’ll get the guitar sounding how we want it and then we’ll realise the drums aren’t loud enough so we turn them up as well until we end up with everything turned up to full. It’s not necessarily a statement about anything.
B: It’s not like we don’t know what we’re doing or anything, we made an artistic choice – we coulda made it clean if we wanted to but we didn’t. Are you wary of the prospect of working with producers who won’t understand what you’re about?
A: Yeah, especially with the vocals, I mean there’s nothing more degrading than hearing yourself… I don’t know how to sing…

Coming back to the noisy aspect of the songs, a lot of the more interesting bands these days seem preoccupied with texture…
Yeah I think we’re definitely a textural band in that sense, but we like the idea of it being very minimal, you know we just record with guitar, keyboard, vocals and drums. But our music would still be good without all that, even compared to other bands who do that… I wonder what Deerhunter or No Age would sound like if they didn’t have that texture, you know. Who would win? I think we’re in the running. (Makes ham-fisted attempt at covering mic) I think we would win. But I can’t imagine going on tour and having to take all these pedals and shit to make it sound that way. We don’t need all these effects to make our Marshall sound like a crying baby or something.

What’s it like being in a band in Columbus?
J: The culture in Columbus exists within itself; a lot of the bands there don’t worry about getting any further, they just wanna be the best band in Ohio. The pretentious kids all move to New York and try to act like they’re not from Ohio.

Are there any influences maybe people should be aware of?
B: Well The Fall was probably the first influence we had that we still have today.
J: But I don’t really listen to their stuff beyond the mid-eighties…

You’re less keen on the more pop-leaning stuff perhaps?
J: I thought they were pretty poppy to begin with. Dragnet has some of the most disturbing songs and then it has some of the catchiest songs ever.
A: But he’s always stuck by his artistic principles, y’know… I wish Guided By Voices brainchild) Bob Pollard was as good as Mark E Smith, they're one of my favourite bands ever but I can’t listen to them anymore. He was like this idiot savant and at the time he was doing all this good stuff he was listening to a lot of the (seminal New Zealand lo-fi imprint) Flying Nun records and he had a moment of great artistic vision but he kinda lost it when he started getting recognition...
J: He just wanted to be in The Who, he wanted to be in this big rock band. It happens to people you know, like five or six years of people telling him he was great and he started believing it… He’s a good guy though, the last record he did with Guided By Voices I thought was pretty good, Half Smiles Of The Decomposed. That was a good going-out statement.

Rip It Off is out now on Matador. The band is currently on tour in the US, alternatively you could close your eyes while visiting the MySpace and try imagining what the live show might be like.