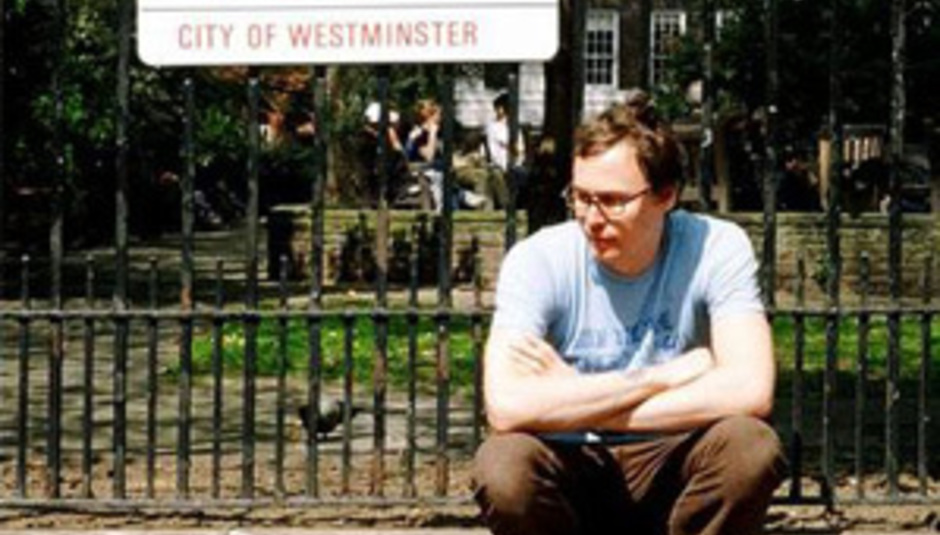 Sacramento-born singer-songwriter Jacob Golden released his debut album Hallelujah World way back in 2002, but turned his back on music soon afterwards. It took a move to Portland, Oregon and the taking up of a full time job to convince him to return to music; the result is Revenge Songs, a record tinged with hope, sadness and Golden’s fragile words, released in October last year (review).

Since then he’s had his music feature on The O.C. and has appeared alongside Liza Minnelli and Sheryl Crow on Later…with Jools Holland. Not bad, really, for an artist whose ‘comeback’ album was recorded partly in a car park.

Revenge Songs is an obviously stark album title. Are the songs largely influenced by personal experience?
Yes. As a writer I'm of the school of writing about what you know. Music for me has always been about making sense of the world. There's been a lot of times in life where songs and music have been the thing that’s kept me going whether it was listening to Radiohead, early R.E.M., Daniel Johnston and the great thing about songwriting is it allows me to find a bit of personal catharsis. I don't sit down and say I'm going to write about this relationship per se; it's more like I live my life and these words and melodies bubble up from my unconscious like little snapshots of my experiences, and then I sort of string them together in a way that rings true to my ears.

After releasing Hallelujah World in 2002 you moved and started a full time job in Portland. When was the point where you realised you had to return to music?
I moved to Portland and was nursing a broken heart for quite a while. I had always felt a pretty full-on calling to make music, and to travel, and the things that I had dreamed about as a boy. At that point, after not really getting a reaction from my first album, I was very sad and I needed to completely clear my head of the whole thing. When I lived in Portland, no one knew me as a singer or knew anything of my past. I had a ‘normal’ job and I didn't sing or write songs for a year. At that point I started to really get into artists like Four Tet, Caribou, Aphex Twin, and Susumu Yokota and was excited about the idea of expressing emotions in music without words. I set up a studio in the basement where I lived, rented an old piano and slowly began to write again. After about a year I was ready to start travelling again and rather then spend months agonising over little details in the studio I did the opposite and started to take a much more documentary approach to recording and writing. I started to play little living room shows and moved around the States quite a bit. After a while I realised I had a collection of songs that I felt good about putting out there. You’ve often eschewed recording in studios and opted for more ambient and unconventional settings, such as subterranean car parks and concrete art galleries. What do these places offer that a standard studio can’t?
I'm always on the hunt for interesting spaces. I like rooms that have a certain character, and when you put up a microphone there is an emotional resonance to the space. I’ve recorded in proper studios and sometimes that can be great because it's such a controlled environment – whatever you put into it is what you get back. It can be a real challenge recording outside, as the whole world around becomes part of the sound; having a roommate come home in the middle of a take or being chased off by a security guard while trying to record in a car park can be a tad frustrating, but sometimes you end up capturing something spontaneous and unpredictable.

Are there any definite influences on the album? For me there’s a likeness, in parts, with Elliott Smith.
I have immense respect for Elliott Smith. I'm sure like a lot of songwriters he's weaved his way into my art. On this album I was really infatuated with ‘60s and ‘70s production; the warmth and the space in those records are very inspiring to me. I was listening to artists like Them, Big Star, America, The Zombies, and newer stuff like Songs of Green Pheasant and Joanna Newsom, albums that have an emotional tone to the record. I was also recording and producing The Battle of Land and Sea's record at that time, and that sort of timeless quality that's unconcerned with "will this work on the radio?" was a great mood to swim around in.

You played South By Southwest for the first time earlier this year, how was that? Did you manage to catch many shows when not performing?
To be honest I felt SXSW as whole to be quite overwhelming and overblown. There is a band playing in every little corner, most trying to be louder and cooler then the next, and there seems to be a very ugly quality to that whole "please sign me!" sort of thing. I did get out to The Black Keys and they were really great. Saw a bit of Kimya Dawson, but couldn't really hear her over the noise. My favourite experience was playing a show with M. Ward and Jim James at a church. It was pretty much the perfect environment for me. Allowing me to get very dynamic, and it really attracted a very ‘listening’ audience, which is best for me. I really enjoyed M. Ward’s set too. He really brings a great deal of integrity to his music and apparently couldn’t really give a fuck about the commercial side of things.

Was performing on Later… with artists like Liza Minnelli weird? Had you ever seen any Later… in the States at all?
Playing on Later… was a real honour and a completely surreal experience. I've watched Later… on my visits to the UK and have seen some fantastic performances on the show over the years. There really is nothing like it in the States. Our TV is so much more commercially minded that you would never have Radiohead and Mary J Blige on the same show. I think it's wonderful to mix it up like that. The show I was on was no exception. Playing next to Hot Chip, Liza Minnelli and Sheryl Crow... It was really like a cool and fucked-up dream. God bless the BBC!

You’ve played a few shows in the UK this year, and you sing “I want to sit and watch the girls in Soho Square, I fell in love so many times just sitting there” on ‘On A Saturday’. Is there a place in the UK which holds a place in your heart?
I still enjoy the rush of London, but as I've travelled more around the country I’ve learned to really appreciate the little out-of-the-way towns and country roads that still have that ‘Old English’ quality, before the shopping malls and chain restaurants that seem to be a nasty import from my country. The Lake District and anywhere you can get a pint of real local ale is good for me.

You sing “‘If I Had A Hammer’ was my mother’s favourite song” on ‘Pretend’. Did your parents influence your musical upbringing at all?
I remember my mum used to play The Mamas and The Papas records a lot at home. There was a lot of great old vinyl in the house and I distinctly remember the smell of pot smoke in the air and people strumming guitars. ‘If I Had A Hammer’ was one of the three songs she requested to be played at her funeral. She was a great woman and is a huge influence on why I make music and why I aim to do something a little bit less than typical with my life.

Revenge Songs is out now on Sawtooth Recordings (review), and current single ‘On A Saturday’ was digitally released on May 26. Find Jacob Golden on MySpace here.