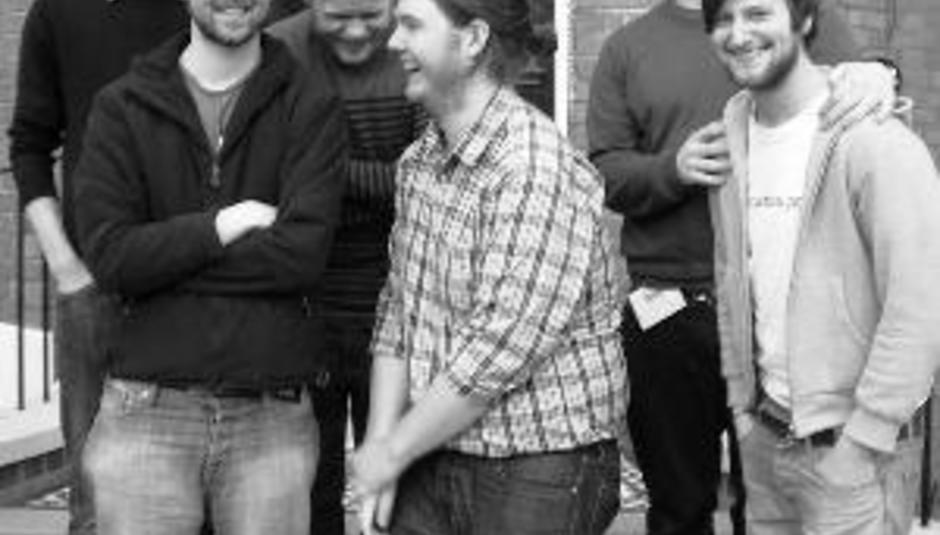 Just who are Jonquil? Their name’s been on DiS a couple of times these past two years, above excellent reviews for their Sunny Casinos mini-album of 2006 (review) and 2007’s debut LP proper Lions (9/10 review), but beyond that: we know little. With Lions re-released via Try Harder right about now, it’s time to get DiScovering.

The personnel, first: Jonquil, from Oxford, are fronted by Hugo Manuel. It is he who answers our DiScover questions. The sextet is completed by Jody Prewett, Ben Rimmer, Sam Scott, Robin McDiarmid and Kit Monteith. They play live at June’s DiScover Club (click for details), with An Emergency and This Town Needs Guns. You, you should probably come.

When and how did Jonquil in its present form come to be?

Basically, three of us started playing together in my kitchen with some string players and we did one gig like that before kind of disbanding... going to different universities across the country. We really didn't want it to just end there, with one tiny gig and nothing recorded, so I figured that the only way we might be able to keep it going whilst we were all spread over the country would be to turn the band into a kind of recording project. So we combined some of the songs we wrote together with a bunch of bits and pieces I had been working on myself, and produced this album Sunny Casinos from my bedroom.

Straight after that Sam Scott joined us, around the same time he joined Youthmovies, and then Robin came along when we did our first tour with This Town Needs Guns... so the band has been just steadily growing since. Kit, Ben, Jody and I have been making music together for years; Kit and I were in a band when we were both 15; and so we all understand each other musically very well, and that can cut out a lot of bullshit when it comes to writing and rehearsing.

Members currently moonlight in other acts, and you’ve all combined with Youthmovies for the Vertical Montanas project (link) – no fear, then, that the well of inspiration may dry any time soon?

I hope not. The thing is that we all individually do our own things musically outside of Jonquil, and from that we're always really excited when we actually all manage to get together and write things. I think it’s pretty important that we all do a lot of other things outside of Jonquil, and it probably adds something to our sound. We have this label called Crossword Records which so far has released two (massive) compilations of hip-hop / spoken word stuff. There are about five or six Jonquil-related projects on that, and we’re working on a Jonquil Remix record to be released on the label.

Lions seemed to be almost universally acclaimed, making it a nice follow-up to the similarly praised Sunny Casinos – can you hear an appealing mixture of elements in the album, or are you too close to it to gain such perspective?

I think we were pretty successful in what we set out to do, so for that I’m pretty pleased with the album. Before it was released there we had the song ‘Sudden Sun’ on the CD on the front of The Wire magazine, which I think did a great deal to get us known across the world. It lead to us being involved with Acuarela Records in Spain and recording the Take-Away Show in Paris, so that was a real boost of confidence for us, and since then it’s just been a slow-burner I guess.

The album’s due for a re-release – what’s the thinking behind this move? Is new material nowhere near completion and you feel there’s a window of opportunity worth exploiting, or has the record’s first run simply wound up?

Yeah, the initial pressing has just about run out, and things have changed a fair bit with Try Harder since it was first released, so we decided to essentially re-release it to give it more of a chance before we move on to our new stuff. We actually have a half-hour EP that is ready to be released, but we’re just sitting on it for the time being; we are always a release ahead of ourselves, and I’m sure by the time that EP gets out we’ll have an album’s worth of material ready! Because I record all of our stuff myself in my bedroom, we’re pretty prolific, and I think it’s worth actually stopping for a moment and letting Lions get out a bit more before anything else.

With the band’s material fairly diverse, how do you go about categorising the act? I see MySpace says experimental/pop – more pop to Jonquil than, say, folk?

When we first started out, the whole folk revival thing was really taking off, and it felt like a really good thing to be a part of, and I think we skimmed the edge of it, and realised that it just wasn’t us. There were a few events we played, all in London, that were very folk-orientated, and we would play to a seated audience in utter silence and get these stony faces looking back at us. Actually one of those things was just after we’d done a tour with Youthmovies playing like proper ‘rock’ gigs, and that’s far more what I’d want to be associated with.

Hear Jonquil on MySpace with your ears HERE and see them with your eyes live as follows: